Young is a town in the South West Slopes region of New South Wales, Australia and the largest town in the Hilltops Region. The "Lambing Flat" Post Office opened on 1 March 1861 and was renamed "Young" in 1863.[2]

Young is marketed as the Cherry Capital of Australia and every year hosts the National Cherry Festival. Every year during the summers, hundreds of backpackers and casual labourers flock to the region to work in the cherry farms. Young is situated on the Olympic Highway and is approximately 2 hours drive from the Canberra area. It is in a valley, with surrounding hills. The town is named after Sir John Young, the governor of NSW from 1861 to 1867.[3][4]

Brass breast plate presented to the Aboriginal leader Coborn Jackey of the Burrowmunditory tribe by the squatter James White.[5] The artifact is held in the museum at Young.

James White was the first European settler in the district and established Burrangong Station in 1826 with a squatting claim of 260 square kilometres (100 sq mi).[5][6] His story is told in the novel Brothers in Exile. Gold was found in the district in 1860. Until that time the area was called Lambing Flat, a reference to the grazing of sheep that was the main industry until mining. The town was gazetted in 1861. The goldfields produced 15,000 kilograms (470,000 ozt) of gold sent by escort from the fields. Up to 20,000 miners worked the fields including about 2,000 Chinese miners.[6]

From November 1860 through to June 1861, anti-Chinese miners attacked Chinese gold miners in the area, now known as the infamous Lambing Flat riots. As gold became scarce, European miners began to resent what they saw as the greater success of the more industrious Chinese, and hence many Chinese miners were attacked, robbed and killed. The anti-Chinese rebels rallied in numbers of up to 3,000. Eventually the rioters were controlled, Chinese miners had their claims restored to them, but the New South Wales Parliament passed the Chinese Immigration Bill which restricted the number of Chinese that could be brought into New South Wales on any ship and imposed a tax per head on entry.

The former Young Shire was acknowledged as the first Local Government Area to institute a rural school bus system in New South Wales.[6]

Young has a number of heritage-listed sites, including:

Owing to Young's far western location, it yields hot, dry summers and cool, damp winters; reflecting a distinctly "continental" climate of the South West Slopes region. Snow falls occasionally; notwithstanding its fairly low elevation of approximately 400 m, the windward position of Young exposes it to strong south-westerly frontal systems. Thus, places such as Goulburn farther east (but higher up) receive less winter moisture than Young, due to more adequate sheltering from these fronts.[11]

In the 2016 Census, the three most common ancestries identified with were: 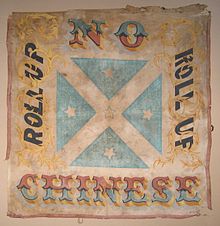 The Roll Up banner around which a mob of about 1,000 men rallied and attacked Chinese miners at Lambing Flat in June 1861. The banner is now on display in the museum at Young.

Young Shire Council established the Lambing Flat Chinese Tribute Gardens adjacent to the site of Chinamans Dam, an old railway dam approximately 4 kilometres (2.5 mi) south of Young. The gardens are intended to create an ambience similar to the Japanese Gardens at Cowra. Chinamans Dam, with an initial capacity of over 9,100 cubic metres (2×10^6 imp gal) when it was in railway use, is situated at a hamlet called Pitstone on Sawpit Gully. The dam was built in the 1860s by German brothers (from Hannover), Herman and John Tiedemann, to provide water for the sluicing of their Victoria Hill gold claims. At some time in the 1870s, the brothers sold the area, including the dam, to a Chinese group who worked the site.[12]

The dam was used as a railway facility from 1882 when the NSW Railway Commissioners gave notice of the intention to build the first part of the Blayney-Demondrille railway. To provide water for its steam locomotives, the Commissioners decided to provide a dam and pump water from it to a facility, known as Young Tank, at the 396-kilometre (246 mi) post. It is not known whether the railways enhanced the existing dam or built a new facility.[12]

From 1885 to 1901, locomotives stopped at Young Tank to replenish their water. In 1901, watering facilities were built at Young Station. The supply of water was obtained from Chinamans Dam. The capacity of the dam was enlarged in 1911. The dam was a popular spot for swimming and, whilst officially frowned upon, was tolerated.[12]

Following the connection to the South West Tablelands Water Supply Scheme, which provided water from Burrinjuck Dam, the railways ceased to draw water from Chinamans Dam after 1936. The site was returned to the Crown in 1962 and in the following year, a 15-hectare (36-acre) reserve was established and the Shire Council were appointed as trustees. The dam has since been enlarged.[12]

The town's rugby league team competed for the Maher Cup.