Yandina /jænˈdiːnə/ is a town and locality in the Sunshine Coast Region, in the Australian state of Queensland.[2][3]

Yandina is in the Sunshine Coast hinterland. The Bruce Highway runs through the locality from south to north, passing just east of the town.[4] Its name comes from 'yan', meaning "to go", and 'dinna', meaning "feet".[5]

Aboriginal people have lived in the Yandina district for over 40,000 years. They belonged to the Gubbi Gubbi language group, which consisted of a number of tribes occupying traditional resource areas. Around Yandina the Undandi tribal area was east of the present day railway line while the Nalbo area was west of the line. Legends, bora rings, pathways, grinding grooves, scarred trees and middens provide evidence of occupancy.

European settlement began in the 1850s and the town of Yandina was surveyed in 1870.[5] It was the first town in the Maroochy district. Many of the original buildings and the heritage streetscape of Stevens Street have been preserved. The Anglican church, built initially as a community church and opened in 1880, is the oldest on the Sunshine Coast. It is part of the Anglican Diocese of Brisbane. The Yandina hotel dates back to 1889 and was relocated using rollers and a bullock team in 1891 when the railway came through town. In the same year, the post office was moved to the new railway station. Privately owned Koongalba homestead is on the National Heritage List and is one of several historic homes in town. Yandina was originally planned to be the centre of the shire[6] but as the local sugar mill was built in Nambour, more and more people who worked there moved closer.

The early timber getters logged beech, cedar, bunya pine and flooded gum. The timber industry remained important until the 1970s when a shortage of timber forced the closure on the Yandina mill. The fertile land around Yandina has been used for beef and dairy cattle, fruit growing, sugar cane and ginger. Its current claim to fame is in being a ginger town. It is the home to the Buderim Ginger Factory.

Yandina has a heritage-listed site:

Not long before World War I, some pieces of raw ginger found their way to Buderim, Australia—which was then a small farming area about 100 kilometres (62 mi) (60 miles) north of Brisbane, where the comparatively high rainfall and humidity combined to produce conditions which were ideal for growing this unusual crop.

The interruption to the supply of ginger from China, caused by World War II, provided the opportunity for growers in the Buderim area to expand their sales. As a result of this, five Buderim farmers met together in an old blacksmith's shop and formed The Buderim Ginger Grower's Co-operative Association Limited. Between them they had capital of 25 pounds, two wooden vats and 14 tons of green ginger.[citation needed]

In 1979, an area of nearly nine hectares was leased from the Department of Commercial & Industrial Development. The first stage of a new factory complex was commenced, opening in time to help in processing the 1980 Early Harvest. The establishment of the Tourist and Administrative Complex in Yandina during 1985 completed the industry's relocation program and in 1989, Buderim Ginger Limited was listed on the stock exchange.

Throughout the 1990s, Buderim Ginger became globally recognised for producing the world's finest ginger.[citation needed] This has been achieved by investing in production facilities and meeting the needs of customers in overseas markets, from the UK to the US and from Japan to New Zealand. Buderim Ginger exports to over 17 countries.[citation needed]

Over the last decade and more recently Buderim Ginger has expanded its business, become the world's leading processor and marketer of macadamias with both Australian and Hawaiian macadamia growing and processing commencing. In 2005, Buderim Ginger also became the owner of Buderim Baking Company which produces a range of savoury pastry products that are distributed to prominent national customers in the Australian retail market. The Ginger Factory maintains its position as one of the region's most popular tourist attractions with the launch of the Taste of Ginger Tour and the opening of the Heritage Centre. 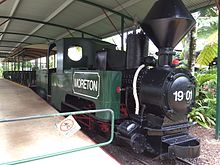 Steam train at The Ginger Factory

The Buderim Ginger Factory is a tourist attraction and working ginger factory.[8] It was established in 1980.[6] There are rides, tours of the factory, and shops, restaurants and other exhibits for visitors to enjoy. The Buderim Ginger Factory is operated by Buderim Ginger Limited that was listed as a public company in December 1988. The company manufactures confectionery ginger products (sugar-based) that are marketed in Australia and exported to a number of international markets including UK, USA, Canada and various European countries. The company also operates a similar factory in Suva, Fiji. The ginger factory was originally located at Buderim, before moving operations to Yandina in 1978.

The on-site souvenir shop has a large select of Buderim Ginger products in the world, from ginger beers and cordial, marmalades and spreads, to sweets and ginger pieces.

Yandina Station on the Nambour and Gympie North Line has passenger train services to Brisbane. The town was bypassed by the Bruce Highway in July 1997.

The Yandina branch of the Queensland Country Women's Association meets at the Yandina Hall at 11 Stevens Street.[10]

Peter Carey describes the Yandina of 1972 in his novel His Illegal Self.