Previous Next
Town in South Australia

Waikerie (/ˈweɪkəri/ WAIK-uh-ri ) is a rural town in the Riverland region of South Australia on the south bank of the Murray River. At the 2016 census, Waikerie had a population of 2,684.[1] The Sturt Highway passes to the south of the town at the top of the cliffs. There is a cable ferry crossing the river to provide vehicle access from the north side of the river. Waikerie is known for citrus growing, along with stone fruit and grapes.

The Ngawait people have inhabited the area for millennia. The river and surrounding land provided everything they could possibly need - fish, shellfish, birds, kangaroos, and native fruits.

The town of Waikerie derives its name from Weikari, which is claimed to mean 'the rising'. However some linguistic anthropologists argue that the name refers to the spider creator god from local creation myths.[2] The Waikerieness was said to fend off monthly centipede infestations by leaking seeds all over the area. This refers to the emergence of many ghost moths (especially the giant swift moth Trictena argentata : Hepialidae) from the ground among the river red gums Eucalyptus camaldulensis after heavy rain. 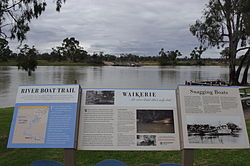 Information sign, overlooking where the ferry crosses the river

The main newspaper of the region is The River News, first published in July 1956 and founded as a direct result of the 1956 Murray River floods.

Waikerie Airport is near Waikerie. It is home to the Waikerie Gliding Club. It has two runways 08/26 and 02/20. The flat dry terrain provides good thermals for gliding. Waikerie hosted the 14th World Gliding Championships in 1974.

In March 2019, the Waikerie silo art project was completed. South Australian artist Garry Duncan painted one silo with a semi-abstract river landscapes and characterised native river creatures such as pelicans, ducks, frogs and rain moths. On the other silo, Jimmy Dvate from Melbourne, painted a regent parrot, a yabby and the endangered Murray hardyhead fish.[4]

Waikerie is home to the Waikerie Football Club, who currently play in the (Australian Rules) Riverland Football League. Former Adelaide Crows captain Mark Ricciuto is from Waikerie and played junior football with the club.[citation needed]

View of the football club oval from Peake Terrace

Notable people born, went to school or lived in Waikerie include: