Varsity Lakes is a suburb of the City of Gold Coast, Queensland, Australia.[2] This suburb was originally known as Stephens, but in 2002, Stephens, Andrews and a section of Robina were amalgamated to form the new suburb of Varsity Lakes. The 2011 census reported a population of 14,366 for the area.

In 1981 a southern section of the estate was officially named Stephens in 1981 in honour of Thomas Blacket Stephens.[6]

In 1999 the area between Stephens and Robina was purchased by Delfin Lend Lease and a real estate development known as Varsity Lakes began. Man-made lakes named Lake Orr and Lake Azzura were created and residential development followed.[7]

In 2002 the suburbs of Stephens, Andrews and a portion of Robina to create a new suburb named Varsity Lakes after the development.[6]

Varsity Lakes offers the full range of schooling from Kindergarten right through to Grade 12. Post high school education is also available. These services are available from the following Education Facilities:

With the exception of a small area west of Mattocks Road, the entire Varsity Lakes suburb falls into the Varsity College primary and secondary catchment zone.[9] While actually being based in Robina, Bond University is also located on the Robina-Varsity Lakes border. 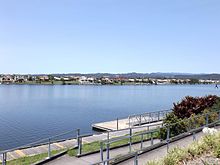 According to the 2011 census the religious groups in Varsity Lakes by size are; Roman Catholic - 23.4%, Anglican - 16%, Uniting Church - 4.3%, Non-denominational Christian - 3.9%, Presbyterian - 3.1% and Buddhism - 2.3%. Remaining religions make up for less than two percent individually while "no religion" comprised 24.8%. Varsity Lakes offers several churches for Christianity. These churches include:

Majority of sporting facilities in Varsity Lakes are present in both the primary and secondary school campuses. Frascott Park also offers grass ovals and a basketball ring. Public facilities include:

The Varsity Lakes Sports House is a precinct for water sports opened in 2012 and was created by Delphin Lend Lease, Gold Coast City Council and Varsity Lakes Community Limited. The centre is based on Lake Orr and has a heavy emphasis on Rowing but also caters for Canoeing, Kayaking, Sailing and Dragon Boating.

In 2008, the Varsity Lakes Skate Park (officially known as Janette Green Park) underwent a $1 million revamp. On 17 March 2009 skating legend Tony Hawk visited the skate park and commented "We just go wherever the skate parks are and you've got a great skate park here." [10] 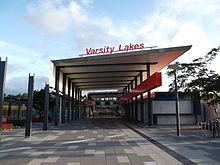 Varsity Lakes is serviced by two forms of public transport. Surfside Buslines operate a number of services though the suburb that connect Varsity Lakes to Robina, Broadbeach and Tweed Heads. Queensland Rail operates a City Train line that runs from Central Railway Station, Brisbane though to the Gold Coast, terminating at Varsity Lakes Railway Station. Trains depart the station every half-hour and operate until late, seven days a week. Both Queensland Rail and Surfside Buslines are under contract by Translink who operate an integrated ticketing system throughout South East Queensland.