Thebarton (/ˈθɛbərtən/ THEB-ər-tən), formerly Theberton, on Kaurna land, is an inner-western suburb of Adelaide, South Australia in the City of West Torrens. The suburb is bounded by the River Torrens to the north, Port Road and Bonython Park to the east, Kintore Street to the south, and South Road to the west.

Many buildings and landmarks that bear the name of Thebarton were in the history municipality, the Town of Thebarton, which included most of the adjoining suburb of Torrensville. These include the Thebarton Oval, the Thebarton croquet and bowls club, Thebarton Theatre, and Thebarton Senior College. The historic Adelaide Gaol, nominally shown as being in Thebarton, and the adjacent Thebarton Barracks of the South Australia Police actually lie within the northwestern Adelaide Park Lands. A part of Thebarton adjacent to the River Torrens, later the site of the South Australian Brewing Company, was originally known as Southwark. Hemmington, Hemmington West and West Thebarton were also suburbs later incorporated into current-day Thebarton.

Prior to European settlement of South Australia, the areas now known as Thebarton and Hindmarsh were called Karraundongga (meaning "red gum spear place") by the Kaurna people, who would craft spears from the red gum branches gathered on the banks of the Torrens there.[4]

The suburb of Thebarton was named after the home of Colonel William Light, the first Surveyor-General of the colony of South Australia, where he lived with his de facto wife Maria Gandy and her brothers.[5] Light named his home after Theberton Hall of Suffolk, England, where he was educated. The area was known as Theberton until approximately 1840,[6] with the variant spelling now accredited to a typographical error, rather than a corruption of "The Barton", based on the Old English bere-tun, meaning "barley farm", as was thought for some time.[7]

Colonel Light surveyed the town-acre as Section 1 and built Theberton Cottage towards the northern part of the area. The area was first subdivided for housing in February 1839, although it took a number of years for the housing to establish, Thebarton Post Office opening on 24 October 1850.[8] By 1866 the population was estimated at around 450 people.

Thebarton Racecourse, which operated from as early as 1838 to 1869, was formed on grazing land in the area now known as Mile End, and later subdivided and completely built over.[9]

The Torrenside Brewery, next to the Torrens on Port Road, was founded in 1886 by A. W. & T. L. Ware, in the then suburb of Southwark.[10] After acquisition by the Walkerville Co-operative Brewing Company Ltd, and its subsequent acquisition by the South Australian Brewing Company in 1939, it was renamed from Walkerville Brewery to Southwark Brewery in 1949 and the company's Walkerville Nathan beer was renamed Southwark beer in 1951.[11][12] The brewery closed on 17 June 2021, with its landmark chimney tower heritage-listed, to be preserved when the site is redeveloped. The artefacts in its on-site museum are being donated to the State Library of South Australia and other local institutions.[13] 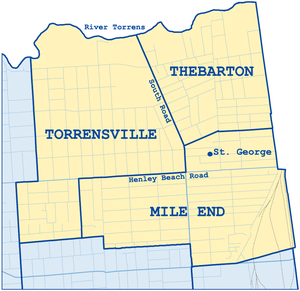 Thebarton was part of the then largely rural District of West Torrens until 1883, when the residents of the more urban suburbs of Thebarton, Mile End and Torrensville successfully petitioned to become the Corporation of the Town of Thebarton.[14]

In 1997 the Town of Thebarton re-amalgamated with the City of West Torrens.[15] 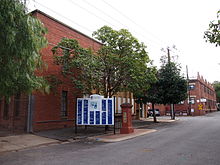 Stirling Street entrance to the University of Adelaide's Thebarton Campus

The Thebarton campus of the University of Adelaide, also known as Adelaide University Research Park, occupies a complex of former industrial buildings in the northeastern corner of the suburb.

The incinerator at 34 West Thebarton Road was designed by noted American architect Walter Burley Griffin, who designed Canberra. The design, including exquisite tiles detail in this photo, was to mollify the local council, which did not want it within council boundaries 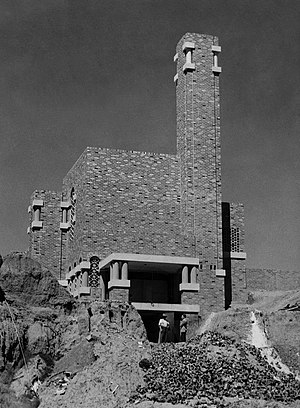 The newly constructed incinerator in 1937. Garbage was tipped in at road level and a reverberatory furnace reduced the garbage to ash, which was fed into this pit to enable the area to be reclaimed.

Thebarton has a number of heritage-listed sites, including: