Wallumbilla is a town and locality in the Maranoa Region, Queensland, Australia.[2][3] In the 2016 census, Wallumbilla had a population of 388 people for the locality with 191 people living in the town itself.[1][4]

Wallumbilla is situated on the Warrego Highway, five hours by road west from Brisbane, just east of Roma in South West Queensland.[5]

To the north of Wallumbilla the Great Dividing Range (in this region no more than a bumpy watershed) passes roughly ESE to NNW. The town is sandwiched between Wallumbilla & Middle Creeks as they flow south toward the Condamine/Balonne River.[5]

Wallumbilla is on the Western railway line and was served by the now non-operational Wallumbilla railway station.[5]

The name Wallumbilla was the name of a pastoral run leased by Charles Coxen, The name is presumed to come from the indigenous Mandandanji language and reportedly means wallu=plenty and billa=jew fish.[2][3] 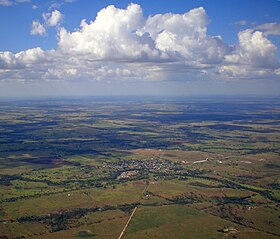 Wallumbilla has a number of heritage-listed sites, including:

Wallumbilla's Calico Cottage, open seven days a week, is the town's Visitor Information Centre. As well as this, Calico Cottage sells locally produced arts and crafts along with refreshments.

The town also contains three churches, as well as a Masonic Hall. Other amenities include a hotel/pub, a news agency, and a petrol station.

Wallumbilla has a heritage complex and visitor information centre. A Public Library operates in Wallumbilla in George Street.[10]

The Wallumbilla branch of the Queensland Country Women's Association has its rooms at 15 College Street.[11]

Wallumbilla State School is a primary and secondary school (P-10) for boys and girls operated by the Queensland Government at 22 High Street. In 2016, the school had an enrolment of 106 students with 15 teachers (12 full-time equivalent) and 10 non-teaching staff (7 full-time equivalent).[12] Most of these students hail from properties surrounding town, as well as the high school students who attended primary school in the neighbouring town of Yuleba. The nearest state high schools offering Years 11 and 12 of secondary school are in Roma (40 km west) and Miles (90 km east).[5]

A major gas hub is in preparation for Wallumbilla, planned to start operation in 2014.[13]