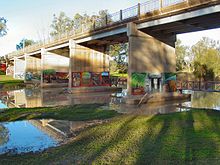 Mitchell is a town and locality in the Western Downs district of Maranoa Region, Queensland, Australia.[2][3] The town services the local area, a cattle and sheep farming district. In the 2016 census, Mitchell had a population of 1031 people.[1]

Mitchell is on the Warrego Highway, 587 kilometres (365 mi) west of Brisbane and 176 kilometres (109 mi) east of Charleville.[4] The Warrego Highway passes through town to form the main street, Cambridge Street. The Maranoa River flows around the northern and eastern sides of the town before eventually flowing into the Balonne River.[5]

Sign on the Warrego Highway at the western entrance to Mitchell

Before the arrival of Europeans, the Maranoa region was occupied by the Mandandanji and Gunggari Aboriginal peoples. Based on archaeological excavations in the Mount Moffatt area, it has been deduced that the Aboriginals had lived there for around 19,500 years. Descendants of the original peoples still live in and visit the area today.

Mandandanji (also known as Mandandanyi, Mandandanjdji, Kogai) is an Australian Aboriginal language spoken by the Mandandanji people. The Mandandanji language region includes the landscape within the local government boundaries of the Maranoa Regional Council, particularly Roma, Yuleba and Surat, then east towards Chinchilla and south-west towards Mitchell and St George.[6]

The town is named after Sir Thomas Mitchell explorer and Surveyor General of New South Wales, who explored the area in 1846.[2]

In 1854, Edmund Morey established the property of Mitchell Downs. When the original homestead was largely destroyed by a flood in 1864, Thomas Close acquired the building's ruins and established the Maranoa Hotel.

In 1902, after a short stand-off, bushrangers Patrick and James Kenniff were captured south of Mitchell at a location previously known as Back Creek but now known as Arrest Creek.[9] Patrick was hanged in 1903 for the murder of Constable George Doyle and Albert Dahlke, while James was released after 12 years imprisonment and died peacefully in 1940.[10]

Long Gully Provisional School opened on 1915 on the road from Mitchell to St George; it closed in 1918.[11]

Mitchell was once the administrative centre of the Shire of Booringa local government area. Since 2008, the town is now part of the Maranoa Region.

In the March 2010 floods, the Maranoa River reached a peak of 13.4 m in the town causing an inundation of 25 houses.[13] The town experienced the worst flooding ever in 2012 when a monsoon trough hovered over central and southern Queensland.

Mitchell has a number of heritage-listed sites, including:

Mitchell has a heritage museum and the Maranoa art gallery.

The Mitchell branch of the Queensland Country Women's Association has its rooms at 87 Cambridge Street.[19]

Mitchell has a humid subtropical climate with hot summers and cold winters by Queensland standards. On 15 August 1979 Mitchell recorded a minimum temperature of −9.4 °C (15.1 °F), which is the 3rd coldest temperature ever recorded in the state.[25] The town gets an average of 157.5 clear days annually.[26]

The Great Artesian Spa was opened in 1998 and is situated in the town's aquatic centre.[27] There are two pools of artesian water, one heated and the other designed for those who prefer a cooler experience. Both spa pools have been designed with disabled access in mind and facilities include a chairlift to allow easy access for physically disabled people.[28]

The water used in the spa pools is renewed regularly and comes from the Great Artesian Basin, which is one of the largest artesian basins in the world, which underlies around one-fifth of Australia.[29] It covers a total area of more than 1,711,000 square kilometres, and has been relied upon for the town water supply since 1927.[30][31]

Douglas Young, referred to as Dougie was an Aboriginal singer and songwriter who was born on August 30, 1933.

William Morris "Billy" Hughes worked on the Railway at Mitchell at one time.

The water supply for the town comes from three bores. The depth of the bores is about 1,000 metres. The water is pumped into a large concrete water tower on the western side of the town. The water is hot when it emerges from the ground, and in the tank it is about 50 °C. Houses close to the tank, have free hot water. In fact it is necessary to cool the water before it can be used.