Bowen was born the eldest son of the Rev. Edward Bowen,[2] Church of Ireland Rector of Taughboyne, a parish in the Laggan district in the east of County Donegal in Ulster.[1] Bowen was educated at Charterhouse School and Trinity College, Oxford. Bowen, twice President of the Oxford Union, was awarded a first class Bachelor of Arts degree in classics in 1844,[2] and was elected a fellow of Brasenose College. Bowen was called to the bar by Lincoln's Inn in 1844 and obtained his Master of Arts three years later.[3] In 1846 Bowen had some naval training, serving for sixteen days on HMS Victory.[1] In 1847 Bowen was appointed president of the Ionian University located in Corfu, a post he held until 1851.[1][3]

Service in the Ionian Islands

Bowen became the chief secretary to the government of the Ionian Islands in 1854.[2] While in that post, he married the Contessa Diamantina di Roma on 28 April 1856. Diamantina was the daughter of Conte Giorgio-Candiano Roma and his wife Contessa Orsola, née di Balsamo. The Roma family were local aristocracy; her father being the President of the Ionian Senate, titular head of the Islands, from 1850 to 1856. He was appointed a Companion of the Order of St Michael and St George (CMG) in 1855 and was advanced to Knight Commander (KCMG) in the following year.[3]

In 1859, Bowen was appointed the first Governor of Queensland, a colony that had just been separated from New South Wales. Bowen's influence in Queensland was greater than that of the governors in other Australian colonies in a large part due to Robert Herbert, who accompanied Bowen from England, and later became colonial secretary and then first Premier of Queensland in 1860–66.[1] Bowen was interested in the exploration of Queensland and in the establishment of a volunteer force, but incurred some unpopularity by refusing to sanction the issue of inconvertible paper money during the financial crisis of 1866. But overall, he was quite popular in Queensland, so that the citizens requested an extension of his five-year term as governor, resulting in his staying for further two years.[4]

The flag of New Zealand as designed by Markham in 1869, approved by Bowen.

In 1867 Bowen was made Governor of New Zealand, where he was successful in reconciling the Māori reaction to the British rule and saw the end of the New Zealand Wars. Bowen also instituted the New Zealand Cross for colonial soldiers, one of the rarest bravery awards in the world and equivalent to the Victoria Cross (he was reprimanded for exceeding his authority).[5]

In 1869, Albert Hastings Markham, first lieutenant of HMS Blanche submitted a design to Bowen for a national ensign for New Zealand. His proposal, incorporating the Southern Cross, was approved and remains in use to this day.[6] In 1871, he visited Milford Sound aboard the HMS Clio and Bowen Falls was named after his wife to mark the occasion.[7]

In March 1873 Bowen was transferred to Victoria (Australia) as Governor of Victoria,[1] where he embarked on an endeavour to reduce the expenses of the colony. A political crisis occurred while Bowen took leave in England from January 1875 to January 1876, when the acting governor, Sir William Stawell, showed "too little flexibility in the exercise of his temporary powers".[1] One of the main issues was the perennial conflict between the Victorian Legislative Council and the Victorian Legislative Assembly; the Council was blocking legislation for its reform and for payment of members.[1] In January 1878, backed by advice from the Colonial Office, Bowen consented to premier Graham Berry's plan to break the deadlock by the wholesale dismissal of public servants on so-called "Black Wednesday".[1] In May that year, Bowen said that "my reluctant consent, purely on constitutional grounds, to these dismissals ... has damaged my further reputation and my career to a degree that I shall never recover. It will never be forgotten either in England or in the Colony". However several others, including Hugh Childers and William Ewart Gladstone, approved of Bowen's actions, and he was appointed to subsequent vice-regal posts.[1]

On 30 March 1883, Bowen was made Governor of Hong Kong. During his tenure, his administration established the Hong Kong Observatory, which also served as the meteorological institute of the territory. He founded the first college in Hong Kong, and ordered the construction of the Typhoon Shelter in Causeway Bay, and a government hospital. He retired in 1887, due to ill health.[9]

Bowen returned to England after his time in Hong Kong and was appointed chief of a Royal Commission sent to Malta in December 1887 to help to draft the new constitution for the island. All recommendations made by the commission were adopted. Afterwards, Bowen was sworn of Her Majesty's Most Honourable Privy Council. 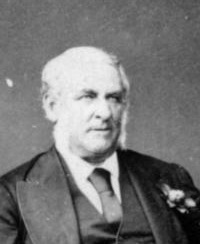 His first wife was Contessa Diamantina di Roma, only daughter of Count Candiano di Roma. They had the following children:

George married his second wife, Letitia Florence White, in late 1896 at Chelsea, London.[10] Florence was the daughter of Dr Thomas Luby, a mathematician, and was the widow of Henry White, whom she had married in 1878.[10]

George Ferguson Bowen died on 21 February 1899 in Brighton in Sussex, aged 77 years old.[10] He died from bronchitis after a short illness of two days. He was buried on 25 February 1899 in Kensal Green cemetery in London.

The following were named after George Bowen:

His wife Diamantina appears to have been more popular than George in Queensland, as there are many Queensland places named after her.