Sir Albert Fuller Ellis CMG (28 August 1869 – 11 July 1951) was a prospector in the Pacific. He discovered phosphate deposits on the Pacific islands of Nauru and Banaba (Ocean Island) in 1900. He was the British Phosphate Commissioner for New Zealand from 1921 to 1951.

Ellis was born in Roma, Queensland, his family moved to Auckland where he attended the . At the age of 18 Albert Ellis joined his brothers James and George in working for John T. Arundel and Co. Their father George C. Ellis, a chemist, and later a farmer in New Zealand, was a director of the company. John T. Arundel and Co. was engaged in Pacific trading of phosphates, copra, and pearl shell. 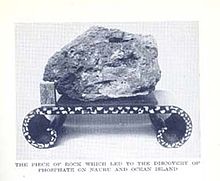 While working in the company's Sydney office in 1899 Ellis determined that a large rock from Nauru being used as a doorstop was rich in phosphate. Following the discovery Ellis traveled to Ocean Island and Nauru and confirmed the discovery.

Operations on Ocean Island commenced three months after the discovery. Ellis managed the development of the phosphate resources on Nauru, and mining began in 1906 under an arrangement with the German administrators of the island. Following World War I Nauru became a mandate of Australia, New Zealand and the United Kingdom, the countries appointed the British Phosphate Commission to manage the extraction and export of phosphate from Nauru. Ellis was appointed the BPC for New Zealand.

In 1928 Ellis was awarded the C.M.G., and in 1938 was created a Knight Bachelor. Ellis wrote a book about the history of the Pacific phosphate islands, his discovery and subsequent development of the phosphate industry on the islands, Ocean Island and Nauru — their Story was published in Australia in 1935.