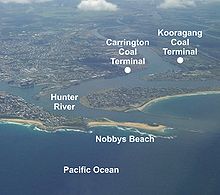 TSS Maianbar was a coastal steamship of the North Coast Steam Navigation Company. She was built in Scotland in 1910 and ran aground in Newcastle, New South Wales in 1940.[1]

Ardrossan Dry Dock & Ship Building Co Ltd, of Ardrossan, Scotland built Maianbar in 1910 for the North Coast Steam Navigation Company.[2] She replaced the one-year-old , a 460 GRT steamship that broke her back after unsuccessfully trying to cross the Manning River Bar earlier that year. Minimbah's engine and boiler were salvaged, shipped back to Scotland and installed in Maianbar. The engine was a 99 RHP two-cylinder compound steam engine built by David Rowan & Co of Glasgow.[2]

In 1920 Maianbar was beached at the entrance to Macleay River and took a month to be re-floated. After she was re-floated she went to Sydney where she was overhauled and lengthened by 20 feet (6.1 m) by cutting her in two and inserting plating between the two halves. This increased her tonnage from 487 GRT[3] to 513 GRT.[2]

In 1937 the Port Stephens Steamship Company bought Maianbar from the North Coast Steam Navigation Co.[3] In 1940 her original owners bought her back, and that September they started towing her back from Port Stephens to Sydney. On 3 September in fine weather off Newcastle, NSW her towline broke and she ran aground on Nobbys Beach,. She was unable to be re-floated and was scrapped on site.