Eraring Power Station is a coal fired electricity power station with four 720 MW Toshiba steam driven turbo-alternators for a combined capacity of 2,880 MW. The station is located near the township of Dora Creek, on the western shore of Lake Macquarie, New South Wales, Australia and is owned and operated by Origin Energy. It is Australia's largest power station.[1] The plant has two smokestacks rising 200 m (656 ft) in height.[2] 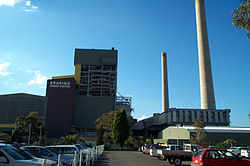 Construction of the power station began in 1977. The first turbo-alternator was brought online in 1982, with the second and third in 1983, and the fourth in 1984.[1] The generating capacity of each of the four turbines was upgraded from 660 MW to 720 MW between 2011 and 2012.[3] The process of upgrading the control room to a fully digital system was completed in 2005.

Salt water from Lake Macquarie is used for cooling and is supplied through a concrete tunnel which passes under Dora Creek and up to the station via open canal. Reclaimed sewage water from the Dora Creek Waste Water Treatment Works is heavily purified and used to generate steam for the turbines as opposed to using municipal potable water supplies. The salt water helps in the cooling of the superheated steam as well as moderation of the temperature of outlet water to minimise thermal pollution.

The coal comes from five mines in the local area, delivered by conveyor, rail and private road. There is significant coal storage capacity on site. Eraring power station employs the Fabric Filter system of dust collection, in which particulate emissions resulting from coal combustion are captured as opposed to being released into the atmosphere. Some of this material is stored in an area nearby while some is taken and used as a component of road base. From 2009 to 2013 the Eraring power station has been equipped with Dry Bottom Ash Handling Systems (the MAC - Magaldi Ash Cooler) at all four units.

At 2.16 am on Friday 28 October 2011 unit 2B generator transformer exploded with the transformer oil catching fire. The oil fire burnt for approximately two days and the estimated repair cost was A$20 million.[4][5] Fire and Rescue NSW, assisted by the New South Wales Rural Fire Service controlled the initial incident with subsequent investigations by NSW Police, the Office of Environment & Heritage, and Workcover NSW.

As of 2017, The power station has had allegations made against it, regarding the exceedance of NSW air pollution standards.[6] The EPA reported Mercury emissions of 1.3kg, and has begun investigating the alleged under reporting of self collected emission data.[7]