Despite the similar logo, name and type of outlets, Target Australia carries no corporate connection or relation to the US discount retailer, Minneapolis, MN-based Target Corporation.[3]

A Target department store in Castletown Shoppingworld, Townsville, with the old look.

In 1926, George Lindsay and Alex McKenzie opened their first store in Geelong selling dress fabrics, bedding and furnishings.[4] Lindsay had begun his retail empire five years earlier, running a store in Ouyen, Victoria, but moved to Geelong to increase the opportunity for growth.[5] The company progressively established stores throughout Victoria, running with a policy of selling quality goods at half the normal rate of profit.[5] 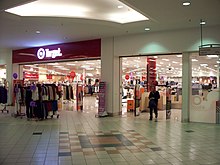 Another older Target outlet within the Northgate Shopping Centre, Glenorchy, a northern suburb of Hobart.

In 2001, Target announced its first ever loss, to the sum of $43m.[citation needed] New senior management was soon put in place, with Target repositioning itself from a store directly competing with Coles Myer stablemate Kmart and Woolworths Limited's Big W, to a more stylish, up-market, but still value-for-money, alternative to speciality stores.[citation needed] Store fittings and layouts were altered to reflect this change. In 2006 Target appointed Launa Inman as managing director, named Telstra Business Women of the Year in 2003, a result of her achievements as an apparel retail buyer for the company. Her position saw Target's $32 million loss at the end of 2000 turn into a $68 million profit 18 months later.[8]

Prior to its November 2007 takeover of Coles Group, Wesfarmers stated in August 2007 that it would consider converting some Kmart stores to the Target brand.[9]

In May 2009, Target stopped providing free plastic bags for its customers, but in 2013 reversed this decision.[10] In November 2011, Dene Rogers, the former chief executive of North American retailer Sears Canada, replaced Inman as Target's managing director,[11] but by April 2013 Rogers had been replaced by former chief operations director at Coles Stuart Machin.[12]

In February 2016, Wesfarmers restructured Target and Kmart under a single 'Department Stores' division,[2] headed by Kmart managing director Guy Russo. An accounting scandal that created $21 million in fraudulent profits was reported on 11 April 2016.[13] Although it is not believed CEO Stuart Machin orchestrated or ordered the accounting irregularities, he took the blame for the scandal and departed Target.[14]

In June 2016 at a Wesfarmers annual strategy briefing Guy Russo announced that Target would be exiting toy sales, pet care and luggage.[15]

Target announced in April 2016 it would relocate its Geelong head office to Melbourne, resulting in an unspecified number of redundancies.[16] Following the April 2016 announcement, Wesfarmers confirmed in December that Target would relocate to Williams Landing in late 2018.[17]

In June 2017, Wesfarmers announced that Target and Kmart would be merging some of their back office operations including procurement. Some Target stores would be converted to Kmart stores while other Target and Target Country stores would be closed.[18][19] As part of the Target to Kmart store conversions, three have taken place, two being in Victoria, at Doncaster East, another at Broadmeadows, and a third in Western Australia at Victoria Park East, all of which were Target's that were converted into Kmart stores.

In May 2020 further store closures and consolidations were announced.[20] 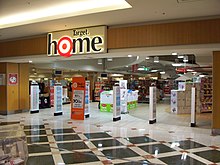 A Target store in Greensborough Plaza, Greensborough, a north-eastern suburb of Melbourne in October 2012,. Like many other national chains within this shopping centre, the old Target Home logo remains at the second level entrance (the third level entrance contains the regular Target logo). Because both levels of space used to house a Myer department store, Target has a larger range of products here.

Target department stores are the majority of Target stores located throughout Australia, and stock the full range of Target's products.

Fosseys was established in 1926 at George Street, Sydney by Alfred Bristow Fossey and grew to 148 stores throughout Australia, with an annual turnover of $300 million.[citation needed] As part of the acquisition of Grace Bros, which had purchased JB Young's of Queanbeyan who owned Fossey's, Myer and later Coles Myer came to own Fossey's. Coles Myer used the Fosseys brand to unify a range of smaller variety stores trading under a range of other names, including Coles Variety stores, which had been the foundation of GJ Coles & Coy Ltd.

Coles Myer merged the operations of Fosseys with Target in 1996, redesigning Fosseys stores to focus on family apparel retailing in rural Australia. It also introduced Fosseys-branded merchandise with attributes of value, convenience and confidence. By 2001, all Fosseys stores located close to Target stores were closed; the remaining Fosseys stores, rebranded Target Country, continue to focus on apparel sales in smaller towns without full-merchandise Target stores. From the mid 1990s onwards there was a rebranding of some Grace Bros stores in regional NSW to Target. This included a large number of stores which had previously been part of the Dubbo based Western Stores. Locations which converted from Grace Bros to Target and then Target Country include Bathurst, Cowra, West Wyalong, Forbes, and Young.

As of 1 July 2007, employees of Fosseys (Australia) Pty Ltd were transferred to Target Australia Pty Ltd, and Fosseys as a legal entity was dissolved. As at June 2008, there were 118 Target Country stores throughout Australia.[22]

In Charters Towers, Queensland the long established Pollard's Store became a Fosseys and is now, most likely the only Target or Target Country store which features leadlight windows.[citation needed]

Urban by Target was a format tried by Target initially at South Yarra, Victoria at The Jam Factory, after taking over a closed Virgin Megastore. The format was introduced in 2010, with a second location opened in 2011, at Flemington, Victoria at Flemington Village. A third location was also opened in 2011, at Pasadena, South Australia, at Pasadena Shopping Centre. The format was smaller than a traditional Target department store, and was focused on clothing and home wares. The location at Flemington was closed down, followed by Pasadena, which remained but converted into a traditional Target department store. South Yarra was renovated with the new logo, in black instead of red, although this location was closed down permanently.

Target Outlet was a format tried by Target at the Target in Dandenong, Victoria at Dandenong Plaza. The format was discontinued around 2014.

In 1996, Target introduced Baby Target as a standalone store format specifically for baby products.[citation needed] The concept had limited success and was ultimately closed down soon after.

Another format tried by Target was the homewares-themed store Target Home, but was later discontinued. Target Home stores have since been phased out to become larger Target stores, and still stock a larger range of homewares in a number of locations in Australia including Joondalup and Carousel in WA, Edwardstown in SA, Highpoint and Greensborough in VIC, and Westfield Warringah Mall in NSW.

In March 2007, Target launched a 42-piece winter collection designed by Stella McCartney.[23] A number of metropolitan stores sold out of the range as soon as 10 minutes after opening, and items from the collection soon began appearing for sale on eBay at inflated prices. Another Stella McCartney collection was released in October 2010, to lesser fanfare.

In May 2007, Target announced its next designer range from Joshua Goot to a mixed reaction,[24] and subsequently produced a collaboration with American designer Zac Posen in April 2008. In the same month, Australian fashion designer Collette Dinnigan released a range of lingerie labelled the 'Wild Hearts' collection.[25]

In March 2016, Target launched a collection of women's, men's, children's and home wares by Jean-Paul Gaultier.[29]