Perth Railway Station is the largest station on the Transperth network, serving the central business district of Perth, Western Australia. It serves as an interchange between the Armadale, Fremantle, Joondalup, Mandurah and Midland lines as well as Transwa's Australind service.

The foundation stone for the George Temple-Poole designed Perth station was laid on 10 May 1880, with the station opening on 1 March 1881 as part of the Eastern Railway from Fremantle to Guildford.[2][3][4] It had one through platform with terminating bay platforms at either end. The Neoclassical style building had a second storey added in 1894 that became the headquarters of the Western Australian Government Railways until 1976.[5] A planned third storey and clocktower were never built.[6][7] The building has been renovated and expanded numerous times since being built, as well as the forecourt entrance area.

The station was the centre of the Western Australian Government Railways system with most regional trains originating from the station. A collection of freight and administrative offices and tearooms were part of the railway station complex.

The railway building has at times housed various commercial operations as well as police offices. The WA Craft Council was a tenant in the 1980s.[8]

For a considerable length of time the forecourt area was used for car parking. This is now very limited except for official vehicles. The building had the Barrack Street and William Street bridges as limiting factors to its development; patrons were able to gain direct access to the station by escalators and walkways, though with the introduction of SmartRider gates the William Street entrance was fenced off and its walkway and exit eventually removed. 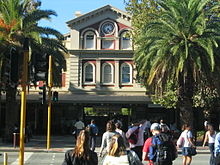 As early as the 1950s, there were moves and suggestions for the redevelopment of the station area.[9]

Following the cessation of most regional services, the completion of standard gauge tracks to East Perth station, and the relocation of most administrative offices to the Westrail Centre alongside, by the late 1970s Perth station remained as a terminus for The Australind service to Bunbury, as well as Transperth suburban services.

In connection with the electrification of the Armadale line, a ninth platform was added in 1992.[10]

The underground platforms are linked to the original Perth station via a walkway under Wellington Street, and also via an entrance from the west end of the Murray Street pedestrian mall that opened on 19 December 2013.[14][15]

In September 2013, a new Platform 9 on the Roe Street side of the station opened.[16] This new platform was temporarily used for special event services until mid-December 2013, before becoming part of the Midland line.[17]

The railway station entrance area had plaques to commemorate the following events:

Platforms currently in use are as follows: