Mandurah station is a railway station on the Transperth network. It is the terminus of the Mandurah line, 70.1 kilometres from Perth station serving the city of Mandurah. 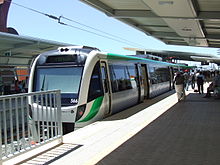 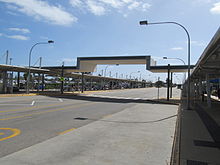 Mandurah station was built on the site of the Mandurah bus station, being opened on 23 December 2007 by Premier Alan Carpenter along with the rest of the Mandurah line.[1][2][3]

A significant change in bus routes occurred on 18 December 2011, which saw the 590 service withdrawn and two new bus routes 583 and 584 replacing the original 588 and 589 services. The two replaced services were rerouted to operate on a loop serving the Mandurah foreshore and the Mandurah Forum.[6] Bus routes in Halls Head, Erksine, Falcon, Wannanup and Dawesville and also changed on 2 March 2014 when route 593 was introduced and route 592 was shortened, terminating in Wannanup.[8]