The Sydney Central Business District (CBD) is the main commercial centre of Sydney, the state capital of New South Wales and the most populous city in Australia. The Sydney CBD is to a large degree coterminous with Sydney's city centre, or Sydney City, and the two terms are used interchangeably. The CBD or city centre is often referred to simply as "Town" or "the City". The Sydney city centre extends southwards for about 3 km (2 mi) from Sydney Cove, the point of first European settlement in which the Sydney region was initially established. Due to its pivotal role in Australia's early history, it is one of the oldest established areas in the country.

Geographically, its north–south axis runs from Circular Quay in the north to Central railway station in the south. Its east–west axis runs from a chain of parkland that includes Hyde Park, The Domain, Royal Botanic Gardens and Farm Cove on Sydney Harbour in the east; to Darling Harbour and the Western Distributor in the west. At the 2016 Australian Census, the City recorded a population of 17,252.[1]

The Sydney City is Australia's main financial and economic centre, as well as a leading hub of economic activity for the Asia-Pacific region. The city centre and areas immediately around it employ approximately 22% of the Sydney region's workforce. The City has the largest gathering of workers in the whole of Sydney. Most of them are white collar office workers in the finance and professional service industries. In 2012, the number of workers operating in the City was 226,972.[2] Based on industry mix and relative occupational wage levels it is estimated that economic activity (GDP) generated in the city in 2015/16 was approximately $118 billion.[3] Culturally, the city centre is Sydney's focal point for nightlife and entertainment. It is also home to some of the city's most significant buildings and structures.

The Central Business District is surrounded by various parks such as Hyde Park, The Royal Botanic Gardens and The Domain

The Sydney CBD is an area of very densely concentrated skyscrapers and other buildings, interspersed by several parks such as Hyde Park, The Domain, Royal Botanic Gardens and Wynyard Park. George Street is the Sydney CBD's main north–south thoroughfare. The streets run on a slightly warped grid pattern in the southern CBD, but in the older northern CBD the streets form several intersecting grids, reflecting their placement in relation to the prevailing breeze and orientation to Circular Quay in early settlement.

The CBD runs along two ridge lines below Macquarie Street and York Streets. Between these ridges is Pitt Street, running close to the course of the original Tank Stream (now tunnelled). Bridge Street took its name from the bridge running east–west that once crossed this stream. Pitt Street is the retail heart of the city which includes the Pitt Street Mall and the Sydney Tower. Macquarie Street is a historic precinct that houses such buildings as the State Parliament House and the Supreme Court of New South Wales.

The skyline of the central business district as viewed from Tasman Sea.

The New South Wales Geographical Names Board defines the area covering the central business district as the suburb named "Sydney".[4] The formal boundaries of the suburb "Sydney" covers most of the peninsula formed by Cockle Bay in the west and Woolloomooloo Bay in the east. It extends north to Circular Quay, Bennelong Point and Mrs Macquarie's Chair, east to Woolloomooloo Bay and the eastern boundary of the Domain and Hyde Park, south to Goulburn Street just north of Sydney's Chinatown (Haymarket), and west to cover the Darling Harbour area on the western shore of Cockle Bay. However, it does not include the northwestern portion of the peninsula which includes the Barangaroo, the Rocks, Miller's Point, Dawe's Point and Walsh Bay area, which are formally separate suburbs grouped by the City of Sydney into the "small area" called "The Rocks - Miller's Point - Dawe's Point".[5][6] Although not part of the CBD, Chinatown, Haymarket, the Rocks, Miller's Point and Dawe's Point are often regarded as part of the city centre.

The postcode zone 2000 is also roughly correlative with the city centre.

"Sydney City" is very occasionally used to refer not only to the City proper, but also its nearby inner suburbs such as Pyrmont, Haymarket, Ultimo and Woolloomooloo.

City of Sydney boundaries over time

See also: History of Sydney and Liverpool riot of 1916 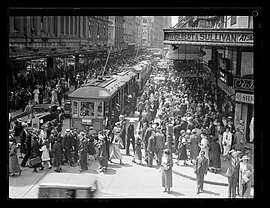 A tram passes through a crowd of people during lunch hour, Pitt Street, 1937.

In the midst of World War 1, on Valentine's Day, riots racked the CBD, in what has come to be known as the Central Station Riots of 1916. A substantial segment of the violence was concentrated in the Central area. These riots involved five thousand military recruits who refused to comply with extraneous parade orders. During the riots they caused significant damage to buildings. People with "foreign" names were especially targeted. The recruits clashed with soldiers, resulting in the death of Private Ernest William Keefe. Eight people sustained injuries. Because this incident occurred in the middle of the Great War the state discouraged media coverage. Only a fifth of the rioters were court-marshalled. These riots spurred the introduction of lockout laws for pubs after 6 pm. This law was only lifted in 1955.[7]

Administratively, the Sydney CBD falls under the authority of the local government area of the City of Sydney.[8] The New South Wales state government also has authority over some aspects of the CBD, in particular through Property NSW.

In the New South Wales state parliament, the seat of "Sydney" covers the city centre together with inner western, southern and eastern suburbs. Independent Alex Greenwich has represented the state seat of Sydney since the 2012 by-election, triggered by the resignation of previous independent Clover Moore, who was the Lord Mayor of Sydney, due to introduced state laws preventing dual membership of state parliament and local council.[citation needed]

In the federal parliament, the seat of "Sydney" covers the city centre together with a larger set of inner western, southern and eastern suburbs, as well as islands in the Sydney Harbour and Lord Howe Island. Australian Labor Party member Tanya Plibersek has represented the federal seat of Sydney since the 1998 Australian federal election.[citation needed] 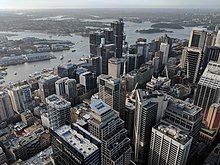 The Sydney CBD is home to some of the largest Australian companies, as well as serving as an Asia-Pacific headquarters for many large international companies. The financial services industry in particular occupies much of the available office space, with companies such as the Westpac, Commonwealth Bank of Australia, Citibank, Deutsche Bank, Macquarie Bank, AMP Limited, Insurance Australia Group, AON, Marsh, Allianz, HSBC, Axa, ABN Amro,[9] RBC and Bloomsbury Publishing all having offices.[10] 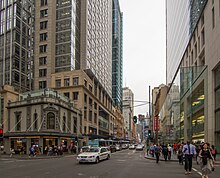 Sydney's CBD is serviced by commuter rail, light rail, bus and ferry transport. Additionally, the rapid transit line connecting the northwest suburbs with Chatswood is planned to continue to the CBD when the second stage of the Sydney Metro linking the North Shore to Bankstown via a tunnel underneath Sydney Harbour and the CBD currently under construction, is completed, with a planned completion date of 2024.

Commuter rail's main hub is Central Railway Station ("Central"), located in the southern part of the CBD in Haymarket: it connects services for almost all of the lines in the Sydney Trains network, as well as being the terminus for NSW TrainLink country and inter-urban rail services. There is a largely-underground CBD rail loop, accessed in both directions via Central, which services five additional CBD stations, plus an underground spur line to Bondi Junction which services two. This is known as the City Circle.

The Dulwich Hill light rail line links the southern part of the CBD and Central to nearby suburbs of Sydney's Inner-west and the CBD and South East Light Rail connects Circular Quay with south eastern suburbs.

Buses, both government-run and privately owned, service the CBD along several dozen routes to both inner and more remote suburbs. NightRide is an after-hours bus service that operates between midnight and 5:00 am, with most services running from George Street outside the Sydney Town Hall.[11]

The CBD at night.

Sydney's cultural centre is compacted within its central business district and inner city ring, due to its nightlife, pedestrian traffic and centrality of notable attractions. There is a large concentration of cultural institutions within the CBD including: the Museum of Sydney, the State Library of New South Wales, the Customs House branch of the City of Sydney Library, the Theatre Royal, the City Recital Hall and the Japan Foundation. There are a total of 19 churches located in the Sydney city centre.[12]

Many other cultural institutions are located at the surrounds of the CBD, such as: the Sydney Opera House and the Museum of Contemporary Art to the north, the Australian Museum and the Art Gallery of New South Wales to the east, the Powerhouse Museum to the west, White Rabbit Gallery and the Haymarket branch of the City of Sydney Library to the south.

Every January during the summer, the city celebrates with the Sydney Festival. There are art, music and dance exhibitions at indoor and outdoor venues. Australian and International theatre during the month is also featured, including Aboriginal, and Contemporary. Many of these events are free.

The Sydney Film Festival is an international event organised every year in June at various venues across the CBD. The festival opened on 11 June 1954 and was held over four days, with screenings at Sydney University. Attendance was at full capacity with 1,200 tickets sold at one guinea each.[13]

Sydney boasts a lively café culture, as well as a club and bar scene distributed throughout the CBD and concentrated in a couple of locations such as Darling Harbour.[14] Although Kings Cross is not technically located within the Sydney CBD, it is accessible via William Street, which runs through Hyde Park and is part of the inner-city region. Oxford Street hosts Sydney's gay scene.[citation needed]

Main articles: Architecture of Sydney and List of tallest buildings in Sydney

Podium of the MLC Centre.

The Sydney CBD contains many of Australia's tallest skyscrapers, including Governor Phillip Tower, MLC Centre and World Tower, the latter consisting predominantly of apartments. It is also home to Australia's earliest skyscraper, the Australia Square building on George Street. As of 2017, the tallest structure is Centrepoint Tower at 309 m (1,014 ft) which has dominated the city skyline since it was topped out in 1981. Recently,[when?] height limits for buildings were lifted from 235 m (771 ft) to 310 m (1,017 ft).

Sydney's CBD features a juxtaposition of old and new architecture. The old architecture dates back to Sydney's earliest days as a colony, down to the more grandiose Victorian architecture from the Gold rush era–the most substantial examples are the Queen Victoria Building and the Sydney Town Hall. Modern architectures take form as high rises and skyscrapers, which are prolific among all of Sydney's city streets. The earliest skyscraper constructed in Sydney was Culwulla Chambers, which stands at a height of 50 m (164 ft) and was completed in 1912. Designed by Spain, Cosh and Minnett, the building consisted of 14 floors and cost £100,000 to build, equivalent of approximately $1 million in today's money.[15]

The Sydney central business district has many heritage-listed buildings including:

Intersection of George Street and Park Street near Town Hall