Palm Beach is a suburb in the Northern Beaches region of Sydney, in the state of New South Wales, Australia. Palm Beach is located 41 kilometres (25 mi) north of the Sydney central business district, in the local government area of Northern Beaches Council. Palm Beach sits on a peninsula at the end of Barrenjoey Road, between Pittwater and Broken Bay.[2] The population of Palm Beach was 1,593 as at the 2016 census.[1]

Palm Beach is sometimes colloquially referred to as 'Palmy';[3] and is used for exterior filming of the soap opera Home and Away, as the fictional town of Summer Bay.[4] It is also the subject of the newly-announced 2018 film 'Palm Beach'.[5] Palm Beach housing ranges from cottages to grand estates,[6][7] owned by some of the country's most affluent people. Many affluent and famous people can also be found holidaying at Palm Beach in summer. According to the Australian Taxation Office statistics for the financial year of 2016-2017, Palm Beach and the post code of 2108 was the wealthiest suburb in Australia, with an average taxable income of $230,000.[8]

Palm Beach is bounded by Broken Bay to the north, the Tasman Sea (within the South Pacific Ocean) to the east, Whale Beach, Avalon and Clareville to the south, and Pittwater to the west. Barrenjoey Headland, which is in the north of the suburb, is part of Ku-ring-gai Chase National Park. The headland at the northernmost point rises quite sharply from the beach to over 100 metres (330 ft) above sea level, and features an operational lighthouse. The narrow sandy isthmus or tombolo linking the south side of the headland to the rest of Palm Beach had extensive fencing and shrub planting undertaken during the 1980s to combat sand erosion.

Along the cliffs and sanddunes there is much remnant bushland vegetation, located in reserves and national parks, with Barrenjoey headland being part of Ku-ring-gai Chase National Park.[9] These reserves often contain endangered ecological communities, such as Littoral Rainforest, and Pittwater spotted gum forest. See, for example, the articles, McKay Reserve, and Barrenjoey. 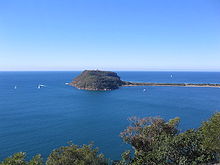 The 2.3-kilometre (1.4 mi) long east-facing eponymous beach curves in a gentle arc between the prominent 100-metre (330 ft) high, lighthouse capped, Barrenjoey Head to the sandstone rocks of Little Head in the south, beach linking Barrenjoey to the mainland. North Palm Beach extends 1.4 kilometres (0.87 mi) south from Barrenjoey, with the northern 600 metres (2,000 ft) backed by a 200-metre (660 ft) wide densely vegetated foredune. The southern Palm Beach section includes the southern 600 metres (2,000 ft) of beach, which curves to the southeast in the southern Kiddies Corner. It receives increasing protection from Little Head with waves decreasing in height down the beach. Rips usually extend all the way to the head, though usually smaller in size, with a weak permanent rip against the southern rocks.[10] 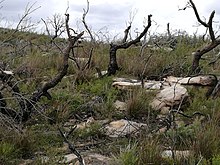 Origin of the name

The southern end of the Palm Beach is marked as Cabbage Tree Boat Harbour on a map of 1832. Palm Beach was later named after the Cabbage Tree palms livistona australis that were near . The plant's species name gave origin to Livistona Lane, off Palm Beach Road.[11]

Governor Philip explored the area in 1788, and named the headland 'Barrenjuee', which was an indigenous word apparently meaning 'young kangaroo'.[12] In 1816, Palm Beach, Barrenjoey and most of Whale Beach (160 hectares (400 acres)) was granted to James Napper. During the 19th century, a few Europeans and Chinese lived at Snapperman Beach catching and drying fish.[13] The Southern end of the ocean beach is marked as Cabbage Tree Boat Harbour on a map of 1832. Palm Beach was later named after the Cabbage Tree palms livistona australis.

In 1900 all land, except Barrenjoey Headland, which had been purchased by the government in 1881, was divided into 18 large blocks, listed as good grazing land, and offered for sale. None sold. In 1912, the land was offered again in smaller residential blocks, offering fishing, sailing, golf and rowing. Most houses were built from local sandstone, other materials were shipped in. Some were guest houses but most were second homes for those who could afford them.

Palm Beach wharf was the terminus reached by boat from Newport or Bayview. Hordern and Wiltshire Parks and Mackay Reserve were donated by RJ Hordern, who lived at Kalua, opposite the beach. Since World War II the area has become more residential but still remains a secluded peninsula at the northern point of Pittwater.

The view south from Barrenjoey Headland

Palm Beach has a number of heritage-listed sites, including:

Facilities in Palm Beach include a milk bar, a large RSL, hairdresser, beautician, preschool, and a number of cafes, restaurants, and bed and breakfast establishments.

The nearest primary school and high school for people residing in Palm Beach are the Avalon Public School - which is a co-educational primary school catering for students K - 6; and Barrenjoey High School - which is a co-educational high school catering for students 7 - 12. Both are state-funded, public schools.[16]

Palm Beach has a number of parks, beaches, and sporting areas, including part of the Ku-ring-gai Chase National Park, and the beach which gives the area its name. Careel Bay Ovals Sporting Complex includes facilities for rugby league, soccer and tennis.

Palm Beach has a golf club, sailing club, surf school and two surf lifesaving clubs. The North Palm Beach Surf Life Saving Club, is used as a set for television soap opera Home and Away and has 'Summer Bay Surf Club' painted on the beach side. Palm Beach Surf Life Saving Club, founded in 1921 (at the south end of the beach), is patrolled by paid surf lifesavers on weekdays during summer and by volunteers from the Palm Beach SLSC on weekends.[10] The Surf Club is one of the biggest in NSW,[citation needed] with members coming from all over Sydney. The beach also attracts rock climbers, due to there being two sandstone boulders with highly featured vertical and overhanging features allowing for bouldering.