Ku-ring-gai Chase National Park is a national park on the northern side of Sydney in New South Wales, Australia. The 14,977-hectare (37,010-acre) park is 25 kilometres (16 mi) north of the Sydney Central Business District and generally comprises the land east of the M1 Pacific Motorway, south of the Hawkesbury River, west of Pittwater and north of Mona Vale Road. It includes Barrenjoey Headland on the eastern side of Pittwater.

Ku-ring-gai Chase is a popular tourist destination, known for its scenic setting on the Hawkesbury River and Pittwater, significant plant and animal communities, Aboriginal sites and European historic places. Picnic, boating, and fishing facilities can be found throughout the park. There are many walking tracks in Ku-ring-gai Chase. The villages of Cottage Point, Appletree Bay, Elvina Bay, Lovett Bay, Coasters Retreat, Great Mackerel Beach and Bobbin Head are located within the park boundaries.

The park was declared in 1894,[2] and is the second oldest national park in Australia,[3] with the Royal National Park being the oldest. Ku-ring-gai Chase is also officially classed as a suburb by the Geographical Names Board of New South Wales.[4] The park is managed by the NSW National Parks and Wildlife Service and was added to the Australian National Heritage List in December 2006.[5]

The park was named after its original inhabitants, an Aboriginal group called the Kuring-gai or Guringai, and called a "chase" to indicate it was an area of natural bush which was not enclosed by fences.

Tessellated pavement near the Elvina Track on the Park's Lambert Peninsular

Ku-ring-gai Chase is part of the Hornsby Plateau, a massive block of sandstone tilting upwards to the north. The park comprises a plateau with an elevation of generally 150–200 m above sea level. The plateau is divided into separate sections by the steep valleys of Cowan Creek, Coal and Candle Creek, and Smiths Creek. These "flooded" or "drowned" valleys, knowns as rias, were eroded into the sandstone much deeper than the current sea level during the glacial phases of the Pleistocene ice age. When the ice caps melted about 10,000 years ago, the sea levels rose and flooded the valleys of the park.

The dominant rock type is Hawkesbury Sandstone which determines the topography and the vegetation in the sandy soils. Sandstone cliffs, rocky and outcrops, and worn caves are common throughout the park. Indigenous people engraved the flat sandstone outcrops (see Sydney rock engravings). Tessellated pavements are found in the park whereby regular chequered patterns in the stone form along fault lines and lines of weakness.

Other rock types in the park are less common. Soils derived from the Narrabeen group of shales are around the eastern shore of the Lambert Peninsula, particularly around Elvina Bay and Lovett Bay. These richer soils provide for a vegetation type different from that of the sandy ridge top soils, providing for forests of spotted gums (Corymbia maculata) with forest oaks as a secondary layer. Eroded remnants of volcanic dykes occur including at Resolution Picnic Area at West Head and Campbells Crater near Cowan, which provide for forests of Sydney blue gum (Eucalyptus saligna).

The park's highest point is 246 m at Willunga Trig near West Head Road which runs along the ridge of the Lambert Peninsula. 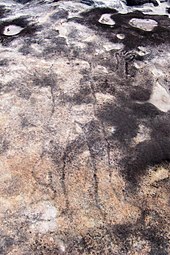 The first inhabitants of the area were the indigenous Guringai people,[2] after whom the park is named. Little about the Guringai was recorded by Europeans at contact and their communities were soon destroyed through disease and conflict with European settlers.[6]

The national park contains extensive evidence of Aboriginal occupation of the area prior to European contact, across more than 800 sites in the park.[7] These include rock engravings, cave drawings, occupation sites, paintings and stencils, axe grinding grooves and middens providing significant evidence of the way of life of the Guringai people.

It was previously underdeveloped by early settlers due to poor accessibility and low soil fertility, except for some of the more fertile ridgetops. Sawmills were established in the 1830s, including at the upper reaches of Cowan Creek where Duffy's Wharf was built to transport logs.

The Pacific Highway and railway built along the ridgetop forming the park's current western border provided access to Cowan Creek along which pioneers settled. 40 hectares at Gerard Point, now Church Point, were granted to James Terry of Gordon.

Following pressure from a local citizen, Eccleston Du Faur, to establish a "National Park for North Sydney", approximately 13,500 hectares, including not only land areas but also most of Cowan Water, was set aside in 1894 as Ku-ring-gai Chase and placed under the care, control and management of trustees. The park was named after its original inhabitants, an Aboriginal group called the Kuring-gai or Guringai, and called a "chase" to indicate it was an area of natural bush which was not enclosed by fences.[6]

Ku-ring-gai Chase became a national park with the proclamation of the National Parks and Wildlife Act in 1967. Additions to the park have made it 14,882 hectares in size.

The television series, Skippy the Bush Kangaroo was shot in northern Sydney at Ku-ring-gai Chase National Park and the adjacent Waratah Park. Bushfires ravaged the park in January 1994.[2] 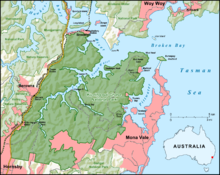 Many of the park's attractions are accessible only by walking track. Many kilometres of park front the southern shoreline of Broken Bay making it a good place to explore by boat.[2]

Rail access is provided at Mount Colah, Mount Kuring-gai, Berowra and Cowan railway stations.[2] All roads in the area are sealed and all have collection gates where a daily fee is payable.

Bobbin Head is located on Cowan Creek and facilities include a marina, picnic areas, a small store, and a lunch-time restaurant in what used to be the Bobbin Head Inn, which also contains an information centre. The area contains many fire trails and a walk through mangroves. Aboriginal engravings can be seen in the area.

A popular camping and picnic site with a small beach is located at the Basin on Pittwater. This is the only place in the entire national park where camping is allowed.[2] Access is either by West Head Road via The Basin Track or on a ferry from Palm Beach Wharf.

West Head is a headland at the north eastern tip of the National Park. A lookout, with views of Barrenjoey, Palm Beach and Broken Bay, has been built on West Head.[8] The Flint & Steel Guesthouse was one of the first buildings on West Head.

The view from West Head Lookout over to Barrenjoey.

Barrenjoey is a locality of Palm Beach.[9] It is a headland and unusual amongst the National Park's features as it is not joined to the rest of the Park by land but separated by 1 kilometer of water, the Pittwater. 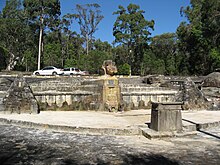 This is a walk going by the Sphinx Memorial, which is a sandstone monument commemorating the fallen A.I.F comrades of Pte. William T. Shirley during World War I and was created by the returned soldier in the 1920s.[10][11] The Sphinx took about one and a half years to complete.[12]

This memorial, following restoration,
was rededicated on the 9th November 1995,
in recognition of the selflessness and sacrifices
of the members of the A.I.F.

Cottage Point is Sydney's smallest locality and is listed as a heritage conservation area.[13] Cottage Point Kiosk and Boat Hire, built around 1918, is situated at Cottage Point at the entrance to Coal and Candle Creek.[14]

Jerusalem Bay is accessible by a track which is part of the Great North Walk from Cowan railway station next to the Pacific Highway.[15] The track passes through a creek gorge lined with temperate rainforest and large turpentines before opening to the bay. At the bay is an old abandoned habitation site. It opens out to Cowan Water and Broken Bay making it popular with boating and fishing enthusiasts. After the bay the track proceeds up a steep climb past Campbell's Crater and along the ridge all the way to Brooklyn. Campbell's Crater is a volcanic diatreme containing subtropical rainforest species such as Red Cedars and Cabbage Palms with a floor of ferns.[16]

A plane accident occurred in the area on 31 December 2017, killing the pilot and five passengers.[17]