Collaroy is a suburb in northern Sydney, in the state of New South Wales, Australia. Collaroy is 22 kilometres north-east of the Sydney central business district, in the local government area of Northern Beaches Council. It is part of the Northern Beaches region. Nicknamed "The Roy" by many of the locals. 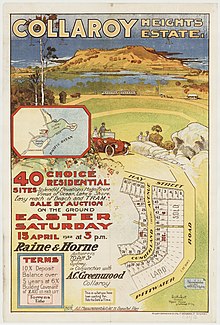 This area was originally part of Narrabeen but was renamed after the S.S. Collaroy ran aground on the beach in 1881.[2][3] It was refloated and later wrecked on the Californian coast in 1889.[4] Most of Collaroy’s development has occurred since the mid twentieth century.

The beach and housing near the beach on Pittwater Road were badly affected by weather in early June 2016. A strip of houses lost backyards and were left in danger of collapse.[6] 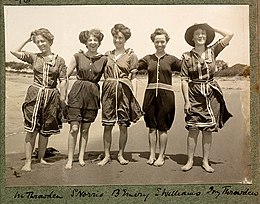 Women in bathing suits on Collaroy Beach (1908) by Colin Caird

Collaroy is home to one of the Salvation Army's largest conference and outdoor education centres in the area. The centre caters for many conferences of the Salvation Army as well as other churches, schools, community groups and businesses. It can cater for up to 440 people and has fully catered camp programs.

Collaroy's shopping precinct is centred along Pittwater Road, which runs north-south through the suburb. Small retail businesses include cafes, restaurants, a book shop, takeaway bars, a pharmacy, a newsagent/post office, several hairdressers, a day spa, a YHA youth hostel, real estate agents, Collaroy cinema, the Collaroy Services club (also known as "The Beach Club") and "The Collaroy", which was formerly known as the Surf Rock Hotel, re-opened in November 2014.[7]

Collaroy's public transport consists of buses operated by State Transit south through to the CBD, Manly, North Sydney (peak hour services only), and north to the suburbs from Narrabeen to Palm Beach.

Collaroy is in the NSW state electorate of Wakehurst, a seat held by Brad Hazzard of the Liberal Party.[8]

Collaroy/Narrabeen is frequented by diverse bird and aquatic animal life including Sea Eagles, Pelicans, Terns, Ducks, Yellow-crested Cockatoo. Dolphins and whales can be seen during migrating season. In 2005 a young New Zealand Fur Seal was discovered washed up on the beach. Exhausted but alive, the Seal was nursed back to health by wildlife officers and then released. A similar incident, with another New Zealand fur seal coming ashore, occurred in August 2014.[9]