Vehicle with an onboard library

The bookmobile of the Ottawa Public Library. This particular model is based on a Saf-T-Liner HDX chassis.

A bookmobile or mobile library is a vehicle designed for use as a library. They have been known by many names throughout history, including traveling library, library wagon, book wagon, book truck, library-on-wheels, and book auto service.[1] Bookmobiles expand the reach of traditional libraries by transporting books to potential readers, providing library services to people in otherwise underserved locations (such as remote areas) and/or circumstances (such as residents of retirement homes). Bookmobile services and materials (such as Internet access, large print books, and audiobooks), may be customized for the locations and populations served.

Bookmobiles have been based on various means of conveyance, including bicycles, carts, motor vehicles, trains, watercraft, and wagons, as well as camels, donkeys, elephants, horses, and mules.[1] 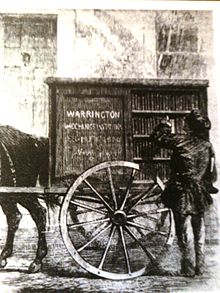 The Perambulating Library of 1859 in Warrington, England

In the United States of America, The American School Library (1839) was a traveling frontier library published by Harper & Brothers. The Smithsonian Institution's National Museum of American History has the only complete original set of this series complete with its wooden carrying case.[2]

The British Workman reported in 1857[3] about a perambulating library operating in a circle of eight villages, in Cumbria. A Victorian merchant and philanthropist, George Moore, had created the project to "diffuse good literature among the rural population".[4]

The Warrington Perambulating Library, set up in 1858, was another early British mobile library. This horse-drawn van was operated by the Warrington Mechanics' Institute, which aimed to increase the lending of its books to enthusiastic local patrons.[5] 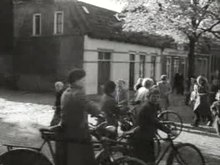 One of the earliest mobile libraries in the United States was a mule-drawn wagon carrying wooden boxes of books. It was created in 1904 by the People's Free Library of Chester County, South Carolina, and served the rural areas there.[6]

Another early mobile library service was developed by Mary Lemist Titcomb[7] (1857–1932).[8] As a librarian in Washington County, Maryland, Titcomb was concerned that the library was not reaching all the people it could. The annual report for 1902 listed 23 "branches", each being a collection of 50 books in a case that was placed in a store or post office throughout the county.[9] Realizing that even this did not reach the most rural residents, the Washington County Free Library began a "book wagon" in 1905, taking the library materials directly to people's homes in remote parts of the county.[10]

With the rise of motorized transport in America, a pioneering librarian in 1920 named Sarah Byrd Askew began driving her specially outfitted Model T to provide library books to rural areas in New Jersey.[11] The automobile remained rare, however, and in Minneapolis, the Hennepin County Public Library operated a horse-drawn book wagon starting in 1922.[12]

Following the Great Depression in the United States, a WPA effort from 1935 to 1943 called the Pack Horse Library Project covered the remote coves and mountainsides of Kentucky and nearby Appalachia, bringing books and similar supplies on foot and on hoof to those who could not make the trip to a library on their own. Sometimes these "packhorse librarians" relied on a centralized contact to help them distribute the materials.[13]

At Fairfax County, Virginia, county-wide bookmobile service was begun in 1940, in a truck loaned by the Works Progress Administration ("WPA"). The WPA support of the bookmobile ended in 1942, but the service continued.[14]

The "Library in Action" was a late-1960s bookmobile program in the Bronx, NY, run by interracial staff that brought books to teenagers of color in under-served neighborhoods.[15]

Bookmobiles reached the height of their popularity in the mid-twentieth century.[citation needed][16]

Bookmobiles are still in use in the 21st century, operated by libraries, schools, activists, and other organizations. Although some[who?] feel that the bookmobile is an outmoded service, citing reasons like high costs, advanced technology, impracticality, and ineffectiveness, others cite the ability of the bookmobile to be more cost-efficient than building more branch libraries would be and its high use among its patrons as support for its continuation.[17] To meet the growing demand for "greener" bookmobiles that deliver outreach services to their patrons, some bookmobile manufacturers have introduced significant advances to reduce their carbon footprint, such as solar/battery solutions in lieu of traditional generators, and all-electric and hybrid-electric chassis.[citation needed] Bookmobiles have also taken on an updated form in the form of m libraries,[18] also known as mobile libraries[19] in which patrons are delivered content electronically.[20]

The Internet Archive runs its own bookmobile to print out-of-copyright books on demand.[21] The project has spun off similar efforts elsewhere in the developing world.[22]

The Free Black Women's Library is a mobile library in Brooklyn. Founded by Ola Ronke Akinmowo in 2015, this bookmobile features books written by black women. Titles are available in exchange for other titles written by black female authors.[23]

In the U.S., the American Library Association sponsors National Bookmobile Day in April each year, on the Wednesday of National Library Week.[24][25] 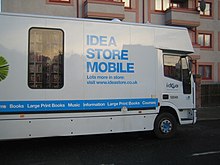