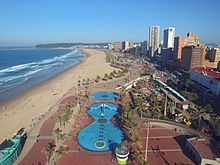 An esplanade or promenade is a long, open, level area, usually next to a river or large body of water, where people may walk. The historical definition of esplanade was a large, open, level area outside fortress or city walls to provide clear fields of fire for the fortress's guns. In modern usage, the space allows the area to be paved as a pedestrian walk; esplanades are often on sea fronts and allow walking whatever the state of the tide, without having to walk on the beach.

In the 19th century, the razing of city fortifications and the relocation of port facilities made it possible in many cities to create promenade paths on the former fortresses and ramparts. The parts of the former fortifications, such as hills, viewpoints, ditches, waterways and lakes have now been included in these promenades, making them popular excursion destinations as well as the location of cultural institutions. The rapid development of artificial street lighting in the 19th century also enabled safe use in the evening. One example of this is Vienna's Ringstrasse.

Esplanades became popular in Victorian times, when it was fashionable to visit seaside resorts. A promenade, often abbreviated to '(the) prom', was an area where people – couples and families especially – would go to walk for a while in order to 'be seen' and be considered part of 'society'. Beach promenades such as the Promenade de la Croisette in Cannes, the famous Promenade des Anglais on the Mediterranean coast in Nice or the Lungomare of Barcola in Trieste still play a central role in city life and in the real estate market.

In the United States, esplanade has another meaning, being also a median (strip of raised land) or berm dividing a roadway or boulevard. Sometimes they are just strips of grass, or some may have gardens and trees. Some roadway esplanades may be used as parks with a walking/jogging trail and benches.[1]

Esplanade and promenade are sometimes used interchangeably. The derivation of "promenade" indicates a place specifically intended for walking, though many modern promenades and esplanades also allow bicycles and other nonmotorized transport.[2] Some esplanades also include large boulevards or avenues where cars are permitted.

A similar term with the same meaning in the eastern coastal region of Spain is rambla, but it is more widely referred to as paseo marítimo ("esplanade"), paseo ("promenade") or explanada ("esplanade") in the rest of the Hispanic world.