Coochin Creek is a coastal locality in the southern hinterland of the Sunshine Coast Region, Queensland, Australia.[2] In the 2016 census, Coochin Creek had a population of 84 people.[1]

Looking from Coochin Creek across the Pumicestone Channel to Bribie Island North, 2019

Although bounded to the east by the Australian mainland coast, Coochin does not face towards the Coral Sea but rather it faces the Pumicestone Passage which separates the mainland from Bribie Island. Pumicestone Passage is very narrow at that point and congested with low unnamed mangrove islands.[3] 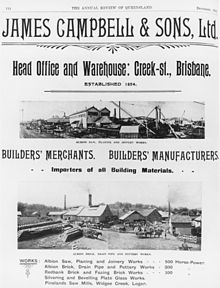 James Campbell had a sawmill in Creek Street, Brisbane. Logs were cut in the Blackall Range and upper Caboolture River and hauled to Mellum Creek from where they were rafted down the Pumicestone Passage to the Creek Street sawmill. In 1881, James Campbell decided to establish a sawmill on the Coochin Creek near the confluence with Mellum Creek, from where the sawn timber was transported to Brisbane, initially via sailing cutter and from 1883 by paddlesteamer.[5]

The township of Campbellville of around 100 people developed around the sawmill. There was a wharf with cranes and a provisional school and cemetery. Campbellville lasted until 1890 when the mill closed down. By that time, the North Coast railway line had made it easier to transport logs and timber by rail than by ship.[5] The most obvious evidence remaining of the township is its cemetery.[6]

Coochin Creek has a number of heritage listings, including:

There is a camping area off Roys Rd run by Queensland Government.[9]