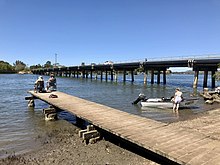 A few kilometres inland from the Maroochydore urban area, Bli Bli rises above the wetlands which were, for many years, the home of the Sunshine Coast sugarcane industry. Whilst this industry is all but gone, state government legislation ensures the wetlands will remain an undeveloped Green Space.

The Maroochy River flows through the locality from north-east (Marcoola) to south-east (Pacific Paradise/Maroochydore).[5]

The name Bli Bli is believed to be derived from the Kabi word bilai meaning sheoak tree (Casuarina glauca).[3][4] 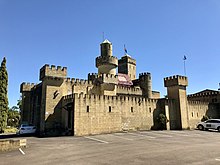 In March 1972, Sunshine Castle was opened. The Norman/medieval-style castle was built as a tourist attraction. The castle now houses a medieval museum and serves as an events venue for functions and concerts.[9]

Bli Bli has a number of heritage-listed sites, including:

Today Bli Bli has become a conveniently located residential community, it retains its small-town feel, yet is minutes from Sunshine Plaza in Maroochydore, Mudjimba Beach and the Bruce Highway (which forms the western boundary of the locality).

Horton Park Golf Club Maroochydore was relocated to David Low Way in Bli Bli in May 2015. The club was renamed Maroochy River Golf Club and has 18 championship holes with a driving range.[13]

The Bli Bli branch of the Queensland Country Women's Association meets at the Uniting Church at 10-36 Lefoes Road.[15]