Beerwah (/ˈbɪərwɑː, -wɔː/) is a rural town and a locality in the hinterland of the Sunshine Coast Region, Queensland, Australia.[2][3] Australia Zoo located here is a major tourist attraction and is visited daily by large numbers of local, national and international tourists. Beerwah has transport links to Brisbane and northbound destinations at Beerwah railway station on the Nambour and Gympie North railway line. Roads in the area include a bypass in the south of the town, Kilcoy-Beerwah Road and Steve Irwin Way.

Beerwah is situated north of Glass House Mountains, approximately 80 kilometres (50 mi) north of Brisbane, and just south of Landsborough. The main road through Beerwah is called .[4] It was formerly known as the Glasshouse Mountain Tourist Route and is accessed by the Bruce Highway, which bypassed the town in 1985.

On Saturday 26 September 1914 the local Anglican residents held a meeting to consider erecting a church in Beerwah. Mr Mawhinney donated a piece of land by the raiilway station.[8] On Saturday 7 November 1914 Archdeacon Henry Le Fanu officially capped the first stump of the new church building. All the materials for the church and the labour were all donated so the church would be free of debt.[9] On Saturday 6 March 1916 Archdeacon Le Fanu returned to officially open and dedicate St James' Anglican Church.[10] In the 1990s diminishing numbers in the congregations led to a decision to close a number of churches in the area. St James' was closed and sold for removal.[11]

On 4 July 1991 the Mary MacKillop Catholic Centre was blessed and opened by Archbishop Francis Rush.[12]

Beerwah has a number of heritage-listed sites, including:

Beerwah is a growing hinterland town.[20] Transport links to Brisbane and northbound destinations at Beerwah railway station on the Nambour and Gympie North railway line.

A small bypass was constructed south of the town, including an overpass of the railway, a large roundabout at Roberts Road, and traffic signals at Kilcoy-Beerwah Road and Steve Irwin Way. This work opened to traffic in October 2009. As part of that project, however, the original level crossing was closed and demolished, causing concern among local residents who claimed it sliced the town in two.[21] In 2010, many residents began to complain about the lack of signage to the town center. The town entrance now features two distinctive large directional signs, one at the Steve Irwin Way entrance, and one at the roundabout after travelling over the railway bridge.

Australia Zoo is located in Beerwah. The zoo was founded by Bob Irwin and later made famous by his son, Steve Irwin. It is a major tourist attraction and is visited daily by large numbers of local, national and international tourists.

Another attraction, the Glass House mountain range, is located nearby. The largest mountain in the range, at 555m, is Mount Beerwah. Access to the Mount Beerwah summit route has been closed since 2008 due to the erosion and destabilization of some walking tracks, leading to a high risk of rock fall.[22] The Big Mower, one of Australia's big things, is located in Beerwah. 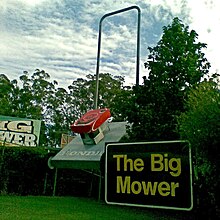 There are a range of national supermarkets, specialty shops, and a retirement village.

The Beerwah branch of the Queensland Country Women's Association meets at 39 Simpson Street.[25]

The median age was 39 years, compared to the national median age of 38.

Aboriginal and Torres Strait Islander people made up 2.8% of the population.

77.2% of people were born in Australia. The next most common countries of birth were England 5.1% and New Zealand 4.8%.