Beerburrum is a small town and coastal locality in the Sunshine Coast Region, Queensland, Australia.[2][3] In the 2016 census, Beerburrum had a population of 763 people.[1]

Mount Beerburrum (26°57′21″S 152°56′57″E﻿ / ﻿26.95583°S 152.94917°E﻿ / -26.95583; 152.94917﻿ (Mount Beerburrum)) is composed of porphyritic trachyte. It is 278 metres (912 ft) high. The mountain has complex rainforest, with some endangered plant species such as Tindal's stringybark (Eucalyptus tindaliae), Pink bloodwood (Corymbia intermedia) and Smooth-barked apple (Angophora leiocarpa). Scribbly gum (Eucalyptus racemosa) is locally predominant in places, with the largest tract retained on Mount Beerburrum. The mountain has a forestry fire tower with a viewing platform at the summit.[7][8] 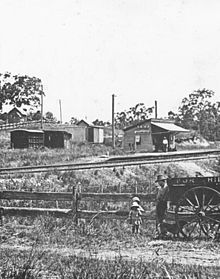 Looking towards the railway station, Beerburrum, 1916 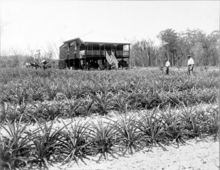 The name is derived from that of the mountain, Mount Beerburrum. In the language of the Indigenous Kabi nation, bir means green parrot and burru mountain.[2]

On 26 July 1799, Matthew Flinders and two sailors from the ship Norfolk climbed Mount Beerburrum accompanied by Aboriginal man Bongaree from Sydney. They were the first Europeans to climb one of the Glass House Mountains.[10]

The North Coast line from Caboolture to Landsborough (which included a siding at Beerburrum) was completed on 1 February 1890. This opened up access to the district for settlement.[15][16][17]

A cemetery was established at Beerburrum circa 1908. It was officially closed in 1970 with about 12 graves still visible.[18]

In 1916, Beerburrum was chosen to be a soldier settlement with over 550 farms allocated. Beerburrum Soldier Settlement was the largest soldier settlement in Queensland. The expectation was that hilly land would be suitable for growing pineapples and other fruits. However, by 1929, it was generally acknowledged that the scheme had failed (like many others), due to the farms being too small to be economically viable. This was compounded by shortages of skills, capital, and markets.[19]

In 1920, a memorial avenue of trees (camphor laurels and weeping figs) was planted in the town's main street to commemorate those who had served in World War I. The street was renamed Anzac Avenue.[22]

Circa 1920, the Beerburrum Bakery opened as part of a group of shops in Anzac Avenue. With the failure of the soldier settlement, most of the shops closed and the buildings relocated elsewhere. The bakery is the only surviving shop building from the settlement.[23]

A School of Arts hall was established circa 1920 in Anzac Avenue and remains one of the few buildings that survive from the settlement.[24]

On 4 February 1922, the Queensland Treasurer John Fihelly officiated at the opening of the cottage hospital at Beerburrum.[25] It closed in 1931 following the failure of the settlement.[26]

St George's Anglican Church was dedicated on 20 August 1922 by Canon D.J. Garland.[27][28] The building was originally built as a chapel at the Enoggera army barracks during World War I by the Soldiers' Church of England Help Society.[29] Many of the furnishings and ornaments in the Enoggera barracks church were donated in memory of soldiers who had died, including the altar and its furnishings which were donated in the member of Earl Kitchener.[30] Due to the failure of the soldier settlement, the church fell into disuse. It was officially closed in August 1931, after which the church was moved to Maleny, where it was dedicated to St George on 6 September 1931 by Archbishop Sharp.[28]

After World War II, pine plantations were developed in the area as state forests creating a local forestry industry. Circa 1947 a Forestry Station Barracks was built to accommodate forestry workers.[31]

The Bruce Highway originally passed along the western boundary of the town (later known as Old Bruce Highway and now as Beerburrum Road). In the early 1970s, the town was bypassed to its immediate east in the early 1970s, and that road (called Glasshouse Mountains Road and now Steve Irwin Way) was itself superseded by the current alignment of the highway further to the east in 1985.

Beerburrum has a number of heritage-listed sites, including:

The Beerburrum railway station is on the North Coast railway line, a coastal route connecting from Brisbane through to Cairns.