Bald Knob is a rural locality in the Sunshine Coast Region, Queensland, Australia.[2]

Bald Knob is 78 kilometres (48 mi) north of Brisbane on the Blackall Range in the Sunshine Coast hinterland of South East Queensland.

Skipper Musk Teahouse Lookout is situated about halfway between the mountain peaks of Bald Knob and Wilkes Knob on the Landsborough Maleny Road.[3] 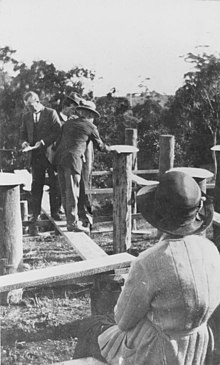 Stump capping ceremony during the construction of the Bald Knob Public Hall, 1924

On Saturday 26 July 1924 a stump capping ceremony was held to celebrate the commencement of construction of the Bald Knob public hall.[4] The hall was officially opened on 18 October 1924 by Richard Warren, the Member of the Queensland Legislative Assembly for Murrumba.[5]