Proposals for expansion of the Melbourne rail network are commonly presented by political parties, government agencies, industry organisations and public transport advocacy groups. The extensions proposed take a variety of forms: electrification of existing routes to incorporate them into the suburban rail system; reconstruction of former passenger rail lines along pre-existing easements; entirely new routes intended to serve new areas with heavy rail or provide alternative routes in congested areas; or track amplification along existing routes to provide segregation of services. Other proposals are for the construction of new or relocated stations on existing lines, to provide improved access to public transport services.

Proposals which have been adopted as policy by the state government, and which are in the detailed planning or construction phases, are also listed in this article.

Map by the Metropolitan Town Planning Commission of a proposed underground railway c.1930-50. This plan eventually became the City Loop, completed in 1981.

The Metropolitan Town Planning Commission, established in 1922 by the Victorian state government, produced a report in 1929 that recommended a new underground railway in central Melbourne running via Exhibition and Victoria streets to reduce congestion at Finders Street station.[1] The plan also proposed:

A 1940 report by the Victorian Railways Chief Engineer for Ways and Works recommended a number of rail improvement works, including an underground city railway, a line to Doncaster via the Kew spur, and the connection of the Alamein line to the Glen Waverley line at East Malvern.[2]

A 1954 strategy released by the Melbourne and Metropolitan Board of Works recommended changes to Melbourne's land-use planning, an extensive network of freeways and a park system.[3] It also recommended some expansions to the rail network, including an underground CBD rail line with three stations beneath Lonsdale Street.[3] It also called for:[3]

The report recommended against a line to Doncaster due to the high cost of tunnelling.[3]

A major plan released by the Victorian state government of Henry Bolte called for the creation of 510 kilometres of freeways, and a number of new rail lines.[4] The plan proposed:

None of these proposed lines were ever built, except for the underground rail loop which was eventually completed as the City Loop in 1982.[1] The lines to Werribee, Sunbury and Craigieburn were also eventually electrified.

A strategy launched in 1999 by the state government of Steve Bracks called for an airport rail link to Melbourne Airport and the reopening of several regional railway lines.

The government of John Brumby responded to a major increase in rail patronage by releasing a plan in 2008 that called for a number of rail extensions, including the Regional Rail Link from West Werribee to Southern Cross station, a new inner-city rail tunnel called the Melbourne Metro Rail Project, and electrification of the rail network to South Morang (completed in 2011), Sunbury (completed in 2012), Melton and Cranbourne East.[5]

New government agency Public Transport Victoria (PTV) released a detailed 20-year rail development plan in 2013 under the government of Denis Napthine.[6] The report outlined a major expansion of the metropolitan rail network in Melbourne over a number of stages, with the goals of introducing a 'metro-style system' and extending the reach of the network.[7] Significant projects identified for construction included the Metro Tunnel, the Airport rail link, a line to Doncaster, a line to Rowville, a second underground inner-city rail tunnel, and many rail electrification and duplication projects.[8] 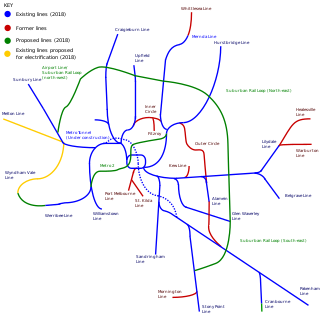 There have been numerous proposals for a North-South tunnel in inner-city Melbourne, to relieve capacity on Melbourne's City Loop and to provide new underground stations. In 2015 the State Government established the Melbourne Metro Rail Authority to oversee planning for new twin 9-kilometre rail tunnels through the central city between South Kensington station and South Yarra. The new Metro Tunnel will have five new underground stations and connect the Pakenham and Cranbourne lines with the Sunbury line, creating a new route through the CBD as an alternative to the City Loop.[9] New underground stations will be created at Arden, Parkville, Domain and two new CBD stations, State Library and Town Hall. Enabling works were underway by 2016 and major construction work on the tunnel and stations began in 2017.[10] The project has an estimated cost of $11 billion and is scheduled to be complete by 2025.[11]

A rail link to Melbourne Airport has been proposed repeatedly since the airport's construction, with a variety of routes and service models suggested, but construction has never commenced. In July 2018, the Federal and State Governments each pledged A$5 billion (for a total of A$10 billion) to construct a rail link. The Federal Government proposed four preferred routes for the link, with one proposal running via a direct tunnel to Highpoint Shopping Centreand the others linking to existing stations in Broadmeadows, Flemington or Sunshine.[12] An assessment of the four preferred routes conducted by Rail Projects Victoria culminated in the route via Sunshine station being selected, with a detailed business case expected by 2020. Construction is expected to start prior to the 2022 Victorian state election.[13]

In August 2018, in the run-up to the 2018 Victorian state election, the State Government pledged $300 million to complete a business case and secure funding to construct a new railway through suburban Melbourne.[14] The project is designed to link major activity centres and amenities such as hospitals, shopping centres, universities, and Melbourne Airport. The proposal would connect most existing railway lines through middle suburbs and enable easier intra-suburban travel.[15]

The Suburban Rail Loop (SRL) would connect the existing station at Cheltenham with other existing stations at Clayton, Glen Waverley, Box Hill, Heidelberg, Reservoir, Fawkner, Broadmeadows, Sunshine and Werribee. It will also link to new stations to be built in areas that have long been promised rail connections, including Monash University, Burwood, Doncaster, Bundoora and Melbourne Airport. Construction is scheduled to begin on the first stage from Cheltenham to Box Hill by 2022 with other sections progressively opening until the full line is operational by 2050.[16][17]

In 2019, the State Government completed a business case for electrification and extension of the Frankston line to Baxter station in Melbourne's south, due for completion in 2019.[18] In November 2019 the business case was delivered to the Federal Government.[19] The plan included electrification of the line with two stations, Baxter and Leawarra station near Monash University Peninsula Campus.[20] The business case included other enhancements, such as track duplication, level crossing removals, station upgrades, car parking and train stabling.[19] The Federal Government committed $225 million towards the project in its 2017-2018 budget.[21]

Electrification to Melton and Wyndham Vale

Electrification of the Deer Park – West Werribee line to Wyndham Vale was included in the 2013 Network Development Plan Metropolitan Rail (NDPMR) by the government agency Public Transport Victoria, along with quadruplication to provide express tracks for Geelong services. The plan also called for the electrification of the Ballarat line as far as Melton. Several additional stations have been proposed for an electrified Wyndham Vale line, at locations including Truganina, Sayers Road, Davis Road and Black Forest Road.[22]

During the 2018 Victorian state election, the State Government announced its Western Rail Plan, which would quadruplicate and electrify the rail lines to Melton and Wyndham Vale, allowing Metro services.[23] Under this plan, Metro and V/Line regional services would be separated, allowing for higher speed trains to be introduced to Geelong and Ballarat. The would electrify the track to Wyndham Vale opened in 2015 as part of the Regional Rail Link. New tracks between Sunshine and Southern Cross Station to be built as part of the Airport rail link could add extra capacity for metro and regional trains.[23] Planning for faster regional rail and electrification of the lines to Melton and Wyndham Vale will occur alongside planning for the Airport rail link, with construction set to start by 2022.[24]

Various proposals have been made to extend the Cranbourne line to Clyde by re-electrifying part of the closed South Gippsland line. Construction on a project to duplicate the Cranbourne line between Dandenong and Cranbourne is expected to begin in 2019, with an extension to Clyde to follow on its completion.[25] In September 2019 the State Government announced the timeline for duplication as part of a $1bn package named the "Cranbourne Line Upgrade".[26] The package includes the removal of the four remaining level crossing on the line, the duplication of 8km of track, and the rebuilding of Merinda Park Station.[26] Set to begin in 2020, the duplication is planned to be completed by 2023 with the level crossing removals completed by 2025, allowing a ten minutes service frequency to Cranbourne and facilitating an eventual extension to Clyde.[26]

There have been various proposals for a successor to the Metro Tunnel, with the main proposal linking the Mernda and Werribee lines via a new tunnel between Clifton Hill and Newport. This proposal was first identified by PTV in the 2013 NDPMR. The new Parkville station to be built as part of the Metro Tunnel has been designed with provision for future expansion to an interchange with the second Metro Tunnel.[27] Melbourne City Council has advocated for the tunnel, which could include stations at Fitzroy, Parkville, Flagstaff, Southern Cross and multiple stations at the urban renewal precinct Fisherman's Bend.[28] The tunnel was included in 2018 as part of the State Government's 30-year strategy for Fisherman's Bend, with two stations in the precinct, and has been backed by the head of government agency .[29][30]

In 2018, a paper released by Melbourne City Council as part of its Transport Strategy refresh called for a third cross-city rail tunnel to be built by 2035.[31] The council called for a stand-alone metro line running from Melbourne Airport to Maribyrnong, Arden Macaulay, Southern Cross, Parliament then east of the CBD to Richmond, Kew, Doncaster and Ringwood.[32][33]

Although the St Kilda Line has been converted to light rail operation and is now part of Melbourne's tram network, several proposals for rail extensions existed throughout its working life.