This article is about the existing above-ground station. For the underground station under construction, see Arden railway station, Melbourne.

North Melbourne railway station is located on the northern edge of the central business district of Melbourne, Australia. The station is a major interchange point with the Craigieburn, Flemington Racecourse, Sunbury, Upfield, Werribee and Williamstown lines all servicing the station. It opened on 6 October 1859,[2][3] and is listed on the Victorian Heritage Register.[4]

Schematic diagram of the station

Located in West Melbourne, the main station entrance is at the south end of the platforms at the intersection of Adderley and Dryburgh Streets. This building contains the main booking office, public toilets and a kiosk, with platform access via escalators and lifts. From the north end brick ramps links the platforms, and platforms 2 through 6 have heritage listed verandas and brick waiting rooms.

At the north end of the station are 1970s era brown brick buildings built over the former Dynon Road overpass, which contains public toilets and a former railway parcels office. Until November 2009 this building also housed the main exit to Ireland Street and Railway Place, along with the booking office and kiosk, until they were moved to the current concourse at the south end. The north end also has exit leading west to the Melbourne Yard rail freight terminal, which is not open to public access.[5]

Construction work on the new southern concourse in February 2008 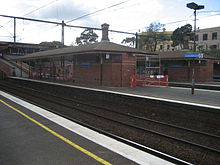 The first railway through the site of North Melbourne station was today's Williamstown line and the first section of the Melbourne, Mount Alexander and Murray River Railway Company line (to Sunbury), both opened on 13 January 1859. The first passenger station with two platforms was opened on 6 December 1859, and the present six platform station was opened on 9 June 1886.[6]

The new station was of free classical architecture, with red brick was used with cream brick banding, along with verandas and cast iron lace work.[4] As built in 1886 North Melbourne had six platforms, with four platform buildings containing ladies toilets and a ladies waiting room. The main booking office, waiting room, and station master's office was located near the ramp to platform 1, and men's toilets and porters' offices were located under the ramps themselves.[4]

The suburban train stabling yard near the station was opened in December 1973 as part of the City Loop project.[7] The footbridge that links the sidings with the Macaulay maintenance centre also opened around this time.[8] The washing plant and additional sidings in Melbourne Yard were made operational in May 1995, as part of the Jolimont Yard rationalisation.[9]

The station buildings on the northern concourse were constructed in 1974,[4] and in the 1980s as part of the construction works for the City Loop the ramps to Platforms 1 and 2 were altered, and the platform extended north.

In May 2006, it was announced that the station was to be redeveloped as part of a $36 million project.[11] Work included a new main entrance at the southern end of the station with escalators, stairs and lifts installed for quicker access to other platforms and to help disabled passengers. Work started in May 2007 and was completed on 16 November 2009.[12][13] To aid construction and avoid disruption to train passengers a crash deck was erected over the tracks, to permit trains to continue running normally underneath while building work continued overhead.[3]

In March 2008 Sita Buslines' route 401 started operating from North Melbourne station to the Royal Melbourne Hospital and University of Melbourne in Carlton and Parkville, enabling commuters to avoid travelling via the City Loop.[14][15]

From December 2013, V/Line Geelong and Warrnambool services no longer stopped at the station, due to the opening of the first section of the Regional Rail Link between Southern Cross and South Kensington, which by-passed North Melbourne.[16] On 11 July 2014, Ballarat, Ararat, Bendigo, Swan Hill and Echuca line services also ceased stopping at North Melbourne, having been switched to the Regional Rail Link tracks[17]

In November 2017, the state government announced that as part of the Metro Tunnel project, North Melbourne would be renamed West Melbourne, to better reflect its geographical location, and to allow a nearby new station to be named North Melbourne.[18] The name change plan was later abandoned.[19]

Sita Buslines operates one route to and from North Melbourne station: