This article is about NSW's train and regional coach operator. For Queensland's train operator under a similar name, see TransLink (South East Queensland).

NSW TrainLink is an Australian coach and train operator providing services throughout New South Wales and into the Australian Capital Territory. It also operates some interstate services to Victoria, Queensland and South Australia. It is the operating name of NSW Trains, an agency of Transport for NSW.

NSW TrainLink was formed on 1 July 2013 when RailCorp was restructured and CountryLink was merged with the intercity services of CityRail. 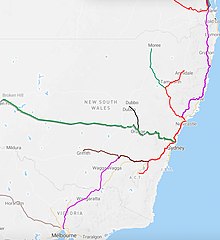 The NSW TrainLink network is divided into two tiers, branded as Intercity and Regional. Intercity services operate commuter style services, mainly to and from Sydney with limited stops within the metropolitan area. The Intercity network is part of Transport for NSW's Opal ticketing system. Seats on Intercity services are available on a first-come, first-served basis. Regional services operate in areas of lower population density, providing passenger transport mainly between regional NSW and Sydney (although some cross country and interstate services operate). Regional services use a separate, reserved seat, ticketing system. 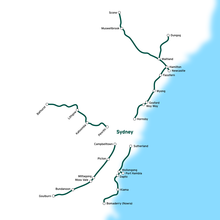 Intercity services operate to a distance approximately 200 kilometres from Sydney, bounded by Dungog in the north, Scone in the north-west, Bathurst to the west, Goulburn in the south-west and Bomaderry to the south.

Electric services extend from Sydney north to Newcastle, west to Lithgow and south to Port Kembla and Kiama. Most electric services originate from or terminate at Central.

Diesel trains serve the more distant or less populated parts of the Intercity network. Hunter Line services operate from Newcastle to Telarah with some extending to Dungog and Scone. Southern Highlands Line services operate between Campbelltown and Moss Vale with a limited number extending to Sydney and Goulburn. Diesel services also operate on the South Coast Line between Kiama and Bomaderry. The Bathurst Bullet provides a twice daily, limited stop service between Sydney and Bathurst.

The Opal fare system for Intercity services is fully integrated with the Sydney Trains and Sydney Metro networks - trips involving Intercity, Sydney suburban and metro services are calculated as a single fare and there is no interchange penalty. Opal is also valid on bus, ferry, and light rail services in the Greater Sydney region (except for the Southern Highlands) but separate fares apply for these modes. The following table lists Opal fares for reusable smartcards and single trip tickets as:[6]

NSW TrainLink operates several bus routes along corridors where the railway line has been closed to passengers or as a supplement to rail services. These bus services are operated by private sector bus companies contracted by NSW TrainLink.

The North Western region services operate through the Hunter, New England and North West Slopes & Plains regions. Services operate on the Main North line from Sydney Central station to Werris Creek. where the service divides for Armidale and Moree.[8]

The Western region services operate through the Central Tablelands, Orana, and Far West regions. Services operate on the Main Western line from Sydney Central station to Dubbo and the Broken Hill line to Broken Hill.[9]

The Southern region services operate through the Illawarra, South Coast, Monaro, South West Slopes, Southern Tablelands, Riverina, and Sunraysia regions, plus the Australian Capital Territory and parts of Victoria. The Government of Victoria contributes financially to the provision of the interstate services. The ACT Government does not make a financial contribution.

Services operate on the:

NSW TrainLink continued with the existing contracts entered into by CityRail and CountryLink for the provision of coach services.

On 1 July 2014, the Lithgow to Gulgong, Coonabarabran, Baradine services passed from Greyhound Australia to Ogden's Coaches.[11]

In July 2014, Transport for NSW commenced the re-tendering process for most of the routes with the previous 24 contracts reorganised into 18 contracts. The new contracts commenced on 1 January 2015 for a five-year period, with an option to extend for three years if performance criteria is met.[11][12] The services operated by Forest Coach Lines and Sunstate Coaches commenced new five-year contracts on 1 July 2016.[13][14]

+ not included in January 2015 re-tendering process

Artist's impression of a D set

A fleet of 554 D set carriages will be introduced to the NSW TrainLink intercity network. They will replace the V sets and allow the H sets to be transferred to Sydney Trains services The first was delivered in December 2019.[30][31][32]

A fleet of bi-mode trains manufactured by CAF are scheduled to replace the XPT, Xplorer and Endeavour fleets from 2023, as part of the NSW TrainLink Regional Train Project.[33][34][35][36]

Intercity services are considered on-time if they operate within six minutes of their scheduled time.[38] For regional services the benchmark is ten minutes.[39] The target is for 92 percent of intercity services and 78 percent of regional services to operate on-time. In 2017-18 NSW Trains met both the Intercity target and the regional target. However, it failed to meet the Intercity target during peak hours.[40] These results partially reverse a trend of failing to meet punctuality targets. Since the organisation commenced operations in 2013-14, NSW Trains has never met the intercity peak punctuality target.[41][40] Regional train services have achieved their punctuality target twice, in 2015-16 and 2017-18. The 2015-16 result was the first time NSW Trains or its predecessor RailCorp had achieved the target in 13 years.[42][40]

The following table lists patronage figures for the network during the corresponding financial year. Australia's financial years start on 1 July and end on 30 June. Major events that affected the number of journeys made or how patronage is measured are included as notes.

The following table shows the patronage of each line of the NSW TrainLink Intercity network for the year ending 30 June 2019, based on Opal tap on and tap off data.[46]

Quiet carriages are designated carriages where noise made by passengers is requested to be kept to a minimum. Passengers are asked to place mobile phones on silent, move carriages in order to have a conversation with another passenger and use headphones when listening to music.[47]

Quiet carriages are on Intercity services are located in four carriages on 8 car sets, two carriages on 4 car sets and one carriage on two car sets.[48]

Quiet carriages were first introduced on the Central Coast & Newcastle Line in early 2012 as a three-month trial. On 1 September 2012 quiet carriages were permanently introduced and expanded to all intercity services operating on the Blue Mountains and South Coast lines.[47] As of 2013, Quiet Carriages operate on the entire NSW TrainLink Intercity network.