The old trestle bridge on the former railway near Clarkefield 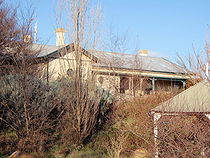 The Lancefield railway line, or the Clarkefield and Lancefield Railway, was a former broad gauge railway in central Victoria, connecting Clarkefield on the Bendigo line to Kilmore on the Heathcote line, via Lancefield. However, the ill-fated Lancefield-Kilmore section operated only briefly in the 1890s, so for much of its history the line existed simply as a spur line terminating at Lancefield station.

A railway branch line off the Melbourne-Bendigo line originated at Clarkefield (known then as Lancefield Junction) and ran to Bolinda, Monegeetta, North Monegeetta, Romsey and Lancefield,[1] opening on 6 June 1881.[2]

The Lancefield-Clarkefield section of the line was finally closed on 13 August 1956,[2] when the wooden trestle bridge near Clarkefield required extensive maintenance and repairs. Though the railway right of way no longer exists, the former track bed can still be seen in many places, most notably the embankments and cuttings leading onto the decaying trestle bridge, which are visible from the road-side at the Bolinda bridge. The old Lancefield railway station fell into a state of disrepair after its closure but has since been refurbished as the Old Railway Station B & B and Carriage Cafe. The station building and goods shed from Monegeeta were relocated to a farming property just North of Romsey on Lancefield Road where they remain today as farm outbuildings. None of the other stations remain intact. Bolinda and North Monegeeta station sites, like that of Monegeeta and Romsey to a less extent, though are still readily identifiable.

On 6 April 1892, the line was extended from Lancefield across the Great Dividing Range to Kilmore.[3] This was one of the most infamous white elephants among the many late-nineteenth century Victorian rail projects, on a par with the Outer Circle railway line in suburban Melbourne.

Due to the steepness of the topography, not only was the Lancefield-Kilmore railway expensive to construct and meandering, it also ran through almost uninhabited land, with little or no passenger custom or freight use. The line was so unsuccessful that it was closed on 1 June 1897,[4] although the tracks were not torn up until 1917. Some of the old right of way is visible around the Lancefield Gap and on the approach into Kilmore.

For such a relatively short section of railway, the line had a significant number of stations, or at least named stopping-points. From Lancefield to Kilmore, stopping points included Mount William, Goldie, Springfield, High Park and Forbes[5][6]