The Craigieburn railway line (previously the Broadmeadows line and Essendon line) is a commuter rail passenger train service operating between Craigieburn in the northern suburbs and Flinders Street in the central business district of Melbourne, Australia. The service is part of the Public Transport Victoria metropolitan rail network.

The line rises steadily after leaving North Melbourne until after Essendon, then drops a little to cross Moonee Ponds Creek, and soon after encounters the Glenroy Bank, a continuous rising gradient of 1 in 50 for nearly 3 km (1.9 mi) that taxed locomotive-hauled trains in the days of steam. After Glenroy, it continues to rise to the end of the suburban line and beyond. Earthworks are, however, generally moderate.

The almost-continuous gradients were a factor when, in 2003, an unmanned suburban train rolled the length of the line from Broadmeadows to the city, and crashed into a stationary but loaded passenger train waiting to depart Southern Cross Station (then Spencer Street). No one was killed or seriously injured.[1]

Interactive map of the Craigieburn line in northern Melbourne.

H 220 leads the Albury Express out of Melbourne, past the signal box at Essendon, circa 1949. (Victorian Railways photograph)

The line from North Melbourne to Essendon was opened by the Melbourne and Essendon Railway Company in November 1860. Soon after, the company opened a branch from Newmarket to Flemington Racecourse. Both lines closed after only a short time, in July 1864. The Victorian Railways reopened the Flemington Racecourse line (including the Essendon line as far as Newmarket) in November 1867, and in January 1871 to Essendon.

In April 1872, the line was extended to a temporary terminus outside Seymour, awaiting completion of a bridge over the Goulburn River. In December 1894, through services were provided from Essendon to Brighton Beach on the Sandringham line.

Automatic Block Signalling started to appear on the line in 1918, with Kensington to Essendon being converted in June of that year, and North Melbourne to Kensington in October. In May 1919, Flinders Street to Essendon and the Sandringham line were the first lines to be electrified in Melbourne, apart from a test installation on the Flemington Racecourse line.

In January 1924, an extra pair of tracks, including a flying junction, opened between North Melbourne and Kensington, enabling the separation of passenger and goods traffic in the busy section. Further works were carried out in 1929, when the double track Albion - Jacana freight line was opened,[2] permitting freight trains to avoid the line via Essendon. Automatic Block Signalling was extended to Broadmeadows in November 1965.

On 30 September 2007 electrification was extended from Broadmeadows to Craigieburn.[3] Previously, passengers for Craigieburn travelled on V/Line diesel services, but Metcards were accepted.

A branch line was provided during the Second World War to Broadstore, commencing at the north-east of Broadmeadows station, opening on 12 October 1942,[4] and remaining in place until 1982;[4] the tracks were not lifted until after 1991.[4] The Broadstore Line was unelectrified, and extended in a directly easterly direction for approximately 1.6 km towards the Upfield Line terminating at the Maygar Barracks in Campbellfield. At one time, according to Forsberg, it had a branch that supplied a migrant hostel.[4] The Broadstore Line is clearly marked on the 1980 map of Victorian Railways.[5] 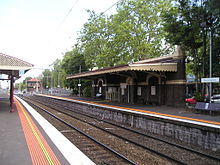 The line near Ascot Vale

Terminus of the line at Craigieburn

As mentioned in the Network Development Plan, the Craigieburn line will eventually link up with the Frankston line (potentially Baxter line) to form one long through-routed line. This line would avoid Southern Cross and Flinders Street, instead travelling via North Melbourne, Flagstaff, Melbourne Central, Parliament and Richmond through a modified tunnel. In the shorter term, a level crossing removal is slated for the Glenroy Road level crossing, to be completed by 2022.