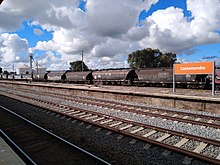 Cootamundra railway station is located on the Main South line in New South Wales, Australia. It serves the town of Cootamundra. The property is owned by RailCorp, an agency of the Government of New South Wales. It was added to the New South Wales State Heritage Register on 2 April 1999.[1]

In 1901, an island platform was built, this has since closed but remains in situ. In 1943, the line through Cootamundra was duplicated with the largest overhead signal gantry in the Southern Hemisphere was erected. It has since been relocated and now stands preserved in the station surrounds.[3]

The Lachlan Valley Railway has a base immediately south of the depot.

The station building is a type 5, first-class brick station originally dating from 1884 with alterations in 1904–05, 1915 and 1943. The platforms are faced in brick. A refreshment room sits on the up platform, dating from c. 1890 with 1904 additions. The branch platform has an additional awning at the Sydney end, which is considered particularly fine.[1]

Cootamundra is a major railway complex with a variety of buildings and an unusually designed first class station building not seen elsewhere. It is of significance both in the townscape and in the development of railways. The railway yard extending for almost the length of the town along its eastern boundary is a major element in the development of the town and the station buildings are at the terminus of one of the main streets in the town. The station building and its major platform awning are of particular significance with very fine detail in both the building and the cast iron columns and brackets of the canopy.[1]

The station building has been substantially altered over its history and is an excellent example of the development of a major facility and the homogenous way in which buildings can grow. Of particular interest is the marking of the station entry with a tower over the entry vestibule. Another important feature of the site is the particularly fine awning to the branch platform with extensive use of cast iron panels and columns. This is one of the finest such awnings in the State. The other elements of the site contribute to the understanding of it and illustrate how a major railway centre operated and was developed. The site also contains a number of mature trees that provide a pleasant setting for the complex.[1]

Cootamundra railway station was listed on the New South Wales State Heritage Register on 2 April 1999 having satisfied the following criteria.[1]

The place possesses uncommon, rare or endangered aspects of the cultural or natural history of New South Wales.

This Wikipedia article contains material from Cootamundra Railway Station and yard group, entry number 01118 in the New South Wales State Heritage Register published by the State of New South Wales and Office of Environment and Heritage 2018 under CC-BY 4.0 licence, accessed on 2 June 2018.