Melton is an urban area within metropolitan Melbourne, Australia located 35 km west from the capital's central business district. It is the administrative centre of the City of Melton local government area and its most populous centre. At June 2019 Melton had an urban population of 72,177,[1] and has grown steadily with an average annual rate of 5.01% year-on-year for the five years to 2019.[1] It is considered part of the Greater Melbourne metropolitan area and is included in the capital's population statistical division.[3]

Melton began as a small town before being declared a satellite suburb in 1974, separated from Melbourne's urban area by a green wedge. Since the 1990s it has experienced rapid suburban growth into surrounding greenfield land and has become a commuter town in the Melbourne-Ballarat growth corridor. Changes to Melbourne's urban growth boundary passed by the state government in 2010 effectively relinquish its satellite city status as it is planned to become part of Melbourne's future conurbation.[4]

It is named after Melton Mowbray in the United Kingdom.

Melton was first settled by squatters establishing sheep runs in the area in the 1830s and a small settlement benefited from traffic passing through it on the way to the Ballarat gold fields during the Victorian Gold Rush. The post office opened on 1 March 1856.[5]

The area was declared a satellite city in 1974 and a green belt existed between it and the urban area of Melbourne until the late 1990s.

To the south-east of Melton Township is Mount Cottrell, a blast-shield volcano, and to the north-east of the township is Mount Kororoit. These two volcanoes are some of the easternmost volcanoes on the Victorian Volcanic Plain which extends to the South Australian border.

Melton consists of seven suburban areas forming a single urban area with the locality of Melton at its centre. In the south of Melton are the suburbs of Melton South and Brookfield. In the north are Kurunjang and Toolern Vale while in the west is the suburb of Melton West. On 9 February 2017, a new division called Harkness was gazetted in the north west.

High Street is the main activity centre, but the urban area lacks a true central business district, with retail, business and civic facilities largely decentralised across the urban area. 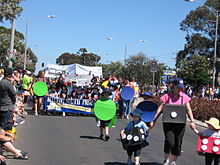 Many live performances are held at the Melton Civic Centre, on High Street, and also at the Tabcorp Park racing complex, on Ferris Road, Melton South.

Each year the Djerriwarrh Festival is held in the city in November. The festival includes a street parade down High Street, two-day market stalls, and the Lions Club Carnival, held in the Police Paddock on High Street.

Melton is the home of the harness racing complex Tabcorp Park, and is the base for Harness Racing Victoria. The 2009 Australasian Breeders Crown was the first major race meeting held at the venue in August 2009.

Melton is also home to the Victorian Blokart Association at McPherson Park, about 7 km north of the CBD.

The Melton Basketball Association[7] is the city's largest sporting club, with over 1,000 members. Along with local junior and senior competitions, The 'Thoroughbreds' also have representative teams competing statewide.

The City of Melton boasts two Hockey Victoria Hockey Clubs. Formed in 2016 Caroline Springs Hockey Club[8] are a new community sporting club catering for the growth areas of the City of Melton's Eastern corridor, currently training at The Bridge Road Sports Precinct. Achieving its first on field success in the HV Sixers competition, both the CSHC men's and women's teams won the inaugural tournaments. These successes are in addition to the award of the Hockey Victoria Coach of the Year 2016 nomination for women's coach Ron Shadbolt. Caroline Springs Hockey Club enter teams into the Juniors and Seniors pennant and Metro competitions.

The Melton Mustangs Hockey Club[9] currently enters Seniors, Masters and Juniors in the Victorian state leagues. The Masters team have achieved most recent success in 2013/14 when gaining back to back Pennants, whilst the Women's section have just finished in their highest league position in their 40-year history. The club is based at The Bridge Road Sports Precinct. The Club celebrated its 40th anniversary in 2016.

Melton Shire Council also operates the Melton Waves Leisure Centre, the only Leisure Centre in Melbourne's west with extensive aquatic facilities with a total of seven pools, including a hot tub, wave pool and pools suitable for toddlers and pools dedicated for lap swimming and hydrotherapy, in addition to a gym and fitness classes for all.[12] 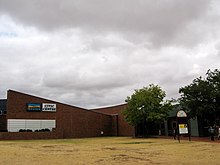 All areas of Melton receive the same analogue and digital television stations as Melbourne. It is also within the broadcast range of all commercial radio stations from Melbourne, and is an end point for digital radio broadcasts in metropolitan Melbourne. Digital radio is available in most of the city but signal diminishes towards the west.

The city is also home to a radio station, 979fm.

Road transport and in particular the motor vehicle are the main form of transport. Melton has been identified by the Department of Transport as one of the most car-dependent communities in Greater Melbourne.[13] As such its residents rely heavily on its substantial network of busy roads. The Western Freeway connects Melton with Melbourne's west runs through the urban area to the south, but bypasses the city centre which is located along High Street, a very wide dual carriageway with service lanes. There are two major freeway interchanges at the centre of the urban area. Both are diamond interchanges, one at Coburns Road which is the main north-south arterial and another for Ferris Road/Melton Highway (C754) on the eastern fringe. These interchanges generate heavy traffic congestion and are major accident blackspots.[14][15] A road reservation exists for a third diamond interchange at Bulmans Road on the western fringe. The C754 is a popular alternative route to the northern suburbs of Melbourne and branches north to the Melton-Gisborne Road (C705) at Kurrunjang connecting Melton to Gisborne. The roads play an important role in public transport with Transit Systems Victoria routes serving the suburbs between 5:30am-9pm on weekdays and 8am-9pm on weekends connect the suburbs to the railway station and also Melbourne's outer suburbs including the 456 to Sunshine via Caroline Springs; 457 from Melton West to the railway station; 458 Kurunjang to the railway station; and 459 Arnolds Creek to the railway station via Westlake. Coach services run from a terminal at the railway station and include Bacchus Marsh Coaches operates school bus services in Melton with connections to Rockbank, Toolern Vale, Bacchus Marsh and Sunbury.[16] A shuttle bus provides direct services from Melton to Melbourne Airport.[17]

Rail transport includes both passenger rail and freight rail. The city's only station is Melton railway station (located in Melton South) which is on the Serviceton railway line. Despite being within Melbourne's metropolitan area and within Metropolitan Zone 2, rail travelers rely on diesel locomotive passenger train services operated by V/Line. Some VLocity Ballarat services, Ararat services, Maryborough services as well as most N class and P class Bacchus Marsh services stop at Melton en route to and from Southern Cross station. A high frequency is available due to the different services, but the journey time to Southern Cross as a result can range from 27–48 minutes during peak travel times. An electrification for the Melton Line was mentioned in the Western Rail Upgrade, along with other upgrades and extensions to the Suburban Rail Network [18] The railway station is a very popular park and ride locality; however, it has been criticised due to poor parking infrastructure.[19]

Melton and its surrounding suburbs have several primary and secondary schools.