As at the 2016 census, the district had a population of 96,049 people;[1] and was the most populous district within the Australian Capital Territory (ACT).

The traditional custodians of the district are the indigenous people of the Ngunawal tribe.[4]

Belconnen was previously occupied by Ginninderra, the former agricultural lands that corresponds with the watershed of Ginninderra Creek. The Belconnen district is named after one of the earliest land grants made in the district during colonial times. Belconnen a land grant totalling 800 hectares (2,000 acres) was made to explorer Charles Sturt who eventually sold the property to Robert Campbell who owned the nearby Duntroon Estate.[8]

A stone plaque located at the sport fields in Aranda, Belconnen's first suburb, commemorates the commencement of urban development of the Belconnen district, inscribed:

"This tablet marks the inauguration of development of the district of Belconnen by the Minister of State for the Interior The Honourable J. D. Anthony, M.P. 23rd June 1966"

The nearby Jamison Centre, the first commercial centre in the district, opened in 1969. The Belconnen Town Centre located on the shore of Lake Ginninderra opened in the late 1970s.

For the purposes of Australian federal elections for the House of Representatives, the District of Belconnen is contained within the electoral divisions of Fenner and Canberra.[9][10]

For the purposes of Australian Capital Territory elections for the ACT Legislative Assembly, most of Belconnen is within the Ginninderra electorate, but the suburbs of Evatt, Giralang, Kaleen, Lawson and McKellar are in Yerrabi.[11]

The Belconnen district is a set of 25 contiguous residential suburbs that surround the Belconnen Town Centre, set on the western shore of the artificially established Lake Ginninderra. In addition to the residential development, the district contains some pastoral leasees on its western and south-western boundaries with the districts of Molonglo Valley and Stromlo, its north-western boundary with the state of New South Wales, and its northern and north-eastern boundaries with the districts of Hall and Gungahlin. The natural features of the district are constrained to the east and to the south-east by the Bruce Ridge and the northern slopes of Black Mountain, much of which has been preserved as nature reserves.

The majority of the residential suburbs are predominantly characterised by detached single family homes on suburban blocks, with pockets of medium density housing units or town houses. This is most pronounced in the suburbs of Belconnen, Bruce, Cook, Hawker, Holt, Kaleen, Macquarie, Melba, Page and Scullin. Within the suburb of Belconnen, a medium density estate, often mistaken as a suburb, called Emu Ridge consists entirely of town house and unit developments, such as UniGardens, Belconnen accommodation for University of Canberra students (run by UniGardens Pty[12]). The most recent suburb to be gazetted is Lawson in 1986,[13] where infrastructure works have commenced and residential development is in progress.

Within the district of Belconnen, there is almost no 'heavy' industry; however there is some light industry and manufacturing, including automotive repair, plumbing, electrical, building, and similar services as well as small arts and crafts manufacturing and sales outlets. A variety of medical practitioners and veterinarians also service the region. There is an established artistic community which includes aspiring performing musicians, theatre groups and visual artists. A recycling industry, involving organic as well as plastic and metals collection takes place at the Parkwood Road Recycling Estate, on the outermost western boundary of the district, within the suburb of Holt.[14] A poultry farm is situated nearby and is a significant primary industry producer providing eggs to Canberra and the surrounding region.

The predominant shopping centre of the district is Westfield Belconnen, located within the Belconnen Town Centre. Additional local commerce activity includes large and smaller department stores, clothes retailers, car dealerships, homeware, supermarkets, and specialist grocery outlets. There are numerous restaurants and a variety of licensed premises within the Belconnen Town Centre, many close to the shores of Lake Ginninderra. The Belconnen Markets are a fresh food market area within this commercial district operating from Tuesday to Sunday during business hours. Smaller retail shopping centres are located at the Jamison Centre in the suburb of Macquarie; the Kippax Centre in the suburb of Holt; and shopping centres in the suburbs of Charnwood, Hawker, and Kaleen. The surrounding suburbs were designed each to have their own smaller shopping areas, with small supermarkets, chemists, hairdressers etc.

The primary mode of transport within the District is by private vehicle. The District of Belconnen was planned in the 1960s and was guided by a philosophy of reliance on private personal transport and an abundance of roads.[citation needed] Public buses serve the district and a bus interchange that used to exist in the Town Centre, in its place is a bus station that services all suburbs, City/ South Canberra as a way point for passengers exiting the nearby Westfield shopping town at Benjamin Way.

Belconnen is well served by a network of near-freeway-quality roads located between suburbs and intersecting the district. The main roads between suburbs are typically landscaped with mounds of earth and vegetation to form 'parkways'.

The main roads connecting the district with North Canberra and the city centre are Belconnen Way and Ginninderra Drive. These roads are 6 lane parkways for the majority of their length and run in an east–west direction. Belconnen is situated south of the Barton Highway which leads to Yass, where it connects with the Hume Highway to Sydney and Melbourne. To the south of the district is William Hovell Drive which connects the southern and western suburbs of Belconnen with Parkes Way and the Tuggeranong Parkway which lead to the city centre and Canberra's southern districts respectively.

The ACTION bus service which provides public transport throughout Canberra is the only form of regularly scheduled public transport in Belconnen. Services from the various suburbs generally pass through a bus interchange at Belconnen Town Centre from where they continue to Civic and the other town centres to Canberra's south. Some services travel to Gungahlin. There are also express services which connect directly with Tuggeranong.

The bus interchange is spread across the Belconnen town centre in three different locations. The previous interchange, which is now one of those locations, was connected by footbridge to large shopping centre and to office buildings occupied by major Government departments. It was an ageing facility which was criticised for being unsafe, particularly at night, and for being dirty and prone to vandalism. For these reasons it was subject to major renovations.

The ACT Government plans to construct a busway to connect the Belconnen Town centre with the hospital and CIT precinct in Bruce and the city centre.

Places of note and interest

Albert is a metal frame sculpture of a carp (fish). Created for Floriade 1996, it was erected at Belconnen Fresh Food Markets in 1998. 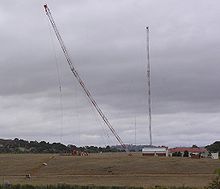 The central and eastern towers at Belconnen Naval Transmitting Station being felled, at 4.07 pm, 20 December 2006. The western tower fell at 3.24 pm; visible lying on foreground rise.

The University of Canberra is located in the suburb of Bruce and has a student population of approximately 10,000. A Canberra Institute of Technology (CIT) campus is also in Bruce.

The Australian Capital Territory Government operates 23 Preschools, 19 Primary Schools, 5 High Schools and 3 Colleges (Senior Secondary Schools) within the District of Belconnen. There are also 8 religious schools and one Government special school for students with disabilities. Prominent High schools include Radford College and Canberra High. Belconnen is also the home to the ACT's only government operated Year 7–12 school, with the dual campus Melba Copland Secondary School located in the North-Eastern suburb of Melba.