The M1 Pacific Motorway, also known by the former names F3 Freeway, Sydney–Newcastle Freeway, and Sydney–Newcastle Expressway; is a 127 km (79 mi) stretch of motorway linking Sydney to the Central Coast, Newcastle and Hunter regions of New South Wales. It is part of the AusLink road corridor between Sydney and Brisbane. The name "F3 Freeway", reflects its former route allocation, but is commonly used by both the public and the government to refer to the roadway long after the route allocation itself was no longer in use.[5]

At its southern end, the freeway starts at Pennant Hills Road, Wahroonga, near its junction with the Pacific Highway (Pearces Corner) in Sydney's north. It heads north, skirting the western edge of the Ku-ring-gai Chase National Park, running parallel with the railway line until it descends to the Hawkesbury River, crossing at Kangaroo Point in Brooklyn. Immediately north of the river, the Hawkesbury River interchange provides access to Brooklyn and Mooney Mooney before the road climbs. At Mount White there are major heavy vehicle checking stations on both northbound and southbound carriageways, to assess compliance and roadworthiness of trucks.

The freeway passes through the Brisbane Water National Park, and the Calga interchange gives access to Peats Ridge. The freeway then turns east to cross Mooney Mooney Creek by way of the 480 m (1,575 ft) long, 75 m (246 ft) high Mooney Mooney Bridge before it reaches the first major interchange on the Central Coast at Kariong.

At the West Wallsend interchange the Newcastle Link Road (A15) takes traffic into Newcastle via Wallsend and also connects with the M15 Hunter Expressway towards Kurri Kurri and Singleton, while the freeway continues north to end at the signalised intersection at the junction of Weakleys Drive and John Renshaw Drive, Beresfield. Prior to November 2018, the intersection was a roundabout and conversion and upgrade works was completed in March 2019.[6][7] From here traffic bound for Highway 1 takes John Renshaw Drive and the New England Highway eastwards to meet the Pacific Highway at Hexham, and Weakleys Drive connects with the New England Highway towards Maitland.

Between Wahroonga and Ourimbah the freeway passes through rugged sandstone country, particularly as it descends to and ascends from the Hawkesbury River. This section of the freeway is characterised by deep cuttings and extensive embankments. 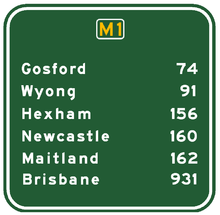 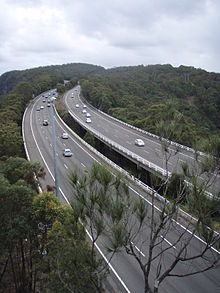 Southbound on the Sydney-Newcastle Freeway, approaching the Mooney Mooney Bridge

Planning for the freeway began in 1952, with the aim of providing a high-speed replacement for a section of the Pacific Highway that had been built in 1925–30 which was struggling to cope with the increased traffic. It was planned that the freeway would connect to the freeway systems being proposed for both Sydney and Newcastle, providing a city-to-city freeway link.

The route between Mount White and Kariong was originally planned to be further south than the route as built, with an easier crossing of Mooney Mooney Creek. By the time that construction on this section was to begin, resistance from the National Parks & Wildlife Service to the proposed route forced the Department of Main Roads to take a route through Calga, using part of the first stage of a proposed freeway route to Singleton which had been built the 1960s. That scheme has never been further developed.

The route through Wyong Shire also changed; instead of passing east of Wyong along the western edge of the Tuggerah Lakes, development in that area forced the freeway to be moved to the west of Wyong, with link roads being constructed to meet the Pacific Highway near Doyalson and Tuggerah.

In addition, the freeway was revised to go to the west of Lake Macquarie rather than the east, and thereby bypass Newcastle. One of the reasons for this change of location was the issue of connectivity to the Pacific Highway north of Newcastle, as the route of the Newcastle Inner City Bypass, which would have provided a northern extension of the freeway, is problematic in terms of its northern terminus point at Sandgate not easily allowing for a northward freeway-standard route to join to the Pacific Highway.

The sections of the Newcastle Inner City Bypass from the Pacific Highway at Bennetts Green to Kotara and from Jesmond to Sandgate have since been constructed, while the original freeway route between Belmont and Bennetts Green and then northward to the Pacific Highway at Merewether Heights is still reserved from development, with the possibility that it could be constructed in the future.

The major stages in the construction of the freeway were:[8]

The northbound and southbound cafes at the Warnervale interchange are called "Cafe F3", reflecting the road's former route allocation and its common name.

In addition to the National Highway 1 designation, the freeway at one stage carried the Freeway Route 3 (F3) designation. This route numbering system, introduced in 1971, was to provide distinctive route numbering and signage for freeways in Sydney and the surrounding areas. Although the route was never signed with the F3 route marker (the numbering system was removed in the late 1980s), the route is still often referred to as the F3 Freeway, with this title being used not only colloquially but on state and federal government documents and web sites and some road signs.

Core sampling in preparation for construction of the Hunter Expressway

Strong public resistance in the 1970s to freeways being constructed within cities and unfavourable outcomes of government inquiries resulted in several freeway proposals in Sydney being abandoned. This included the connecting the Lane Cove Valley and North Western Expressways, which means that the Pacific Highway (a six lane urban arterial) continues to be the connecting route between the freeway's southern terminus at Wahroonga and the city centre.

However plans are currently being developed for extensions at both ends of the M1:

Other than the Pacific Highway, which the freeway has superseded, the freeway is the only direct route between Sydney and the Central Coast, and is the major road route for road transport from Sydney to the Hunter region, northern NSW and Queensland. The freeway thus carries a heavy mix of commuter traffic, road freight transport, and (periodically) holiday and recreational travellers. It often suffers from traffic disruptions, generally associated with traffic volume and congestion related to on-road breakdowns and vehicle accidents, or natural disasters (in particular, bushfire).[21][22]

In addition traffic on the freeway is frequently affected by vehicle crashes, often involving trucks.[23][24] These events have encouraged the NSW motoring organisation NRMA to call for more freight to be moved by rail to reduce the number of trucks using the freeway.[25]

Bushfires have caused closure of the freeway and the nearby railway line and Pacific Highway between Sydney and the Hawkesbury River on a number of occasions. One such event of this type was recorded on 21 and 22 January 2007, when a fire broke out in the adjoining Kuring-gai Chase National Park. The fire forced the closure of the two roads and the railway line between Sydney and the Central Coast, resulting in extended disruption to traffic flow.[citation needed]

Because of the frequency of these disruptions to traffic flow, arguments for a second major freeway north from the Sydney metropolitan area continue to be pushed forward.[17][26] However topography and resultant cost rules this out for practical purposes, other than indirect routes crossing the Hawkesbury in the vicinity of Wiseman's Ferry, some 30 km upstream of the current crossing.

Following criticism of significant delays due to accidents and blockages,[27] the NSW Roads and Traffic Authority (RTA) is in the process of constructing a $28 million emergency plan for the freeway which involves development of a 40 km/h contraflow traffic scheme to allow vehicles to travel around an accident.[28]