Bateau Bay is a suburb of the Central Coast region of New South Wales, Australia.[2] It is part of the Central Coast Council local government area. Bateau Bay lies in the area known as to Indigenous Australians. "Bateau" is French for "boat." The suburb was previously known as Boat Harbour, it was changed to the French version as a marketing activity in the 1970s.[citation needed]

Bateau Bay is about 6 km south of the town of The Entrance and 17 km northeast of Gosford's central business district. Bateau Bay Beach provides access to Crackneck Point, which is a popular local surfing spot. Crackneck Point Lookout (about 100 metres above sea level) is a short distance from the beach, where there is a large clearing and carpark with information boards and a picnic-barbeque area. It provides views of The Entrance peninsula and north across Tuggerah Lakes.

The Entrance District Sporting and Community Centre (EDSACC) is located on The Entrance Road, between Yakalla Street and Eastern Road. The precinct is separated into three areas: EDSACC North Ovals (soccer), EDSACC South Ovals (rugby league), and a Sports Centre that bisects the two. At the very south of the precinct is a golf driving range and a ten-pin bowling centre. EDSACC is home to the Killarney District Football Club and The Entrance Tigers Rugby League Club, as well as EDSACC Croquet Club. There are within the suburb fields that allow for playing of rugby league, rugby union, soccer, Australian rules football, softball, baseball, and cricket

EDSACC building has had a number of names in its time and provides tennis courts, indoor basketball courts, and a gymnasium, and was opened in 1979 by the Governor of New South Wales, Sir Roden Cutler.

It was previously the location of The Entrance Airport.

The precinct also has a golf driving range, which was formerly a football field, but was deemed unsafe due to its uneven surface. The home side—The Entrance Bateau Bay Blues—was forced to relocate to a field on Mingara's property at Tumbi Umbi. The Blues have since resettled at Eastern Road Oval in Killarney Vale.

Pat Morley Oval, located on Cresthaven Avenue, was until the early 1980s a rubbish tip and nightsoil depot and was used as a football oval in the 1990s. Development of a new oval adjacent to the existing Pat Morley Oval was completed in 2010, and is used for cricket and Australian rules football. The Entrance Bateau Bay Blues AFL Club will relocate there in 2011. Central Coast Softball will also use the new ground in the summer season. The main ground is home to The Entrance Bateau Bay United Soccer Club, the oldest soccer club on the Central Coast, having been established in 1949.

(formerly known as Stockland Bay Village and Bay Village) is a shopping centre which was opened in January 1985 and is operated by Charter Hall. It is mainly tenanted with chain stores with few independent retailers. This piece of land is a new addition to the boundary of Bateau Bay, prior to construction it was included in the boundary of Killarney Vale. It is located next to a Central Coast Shire Council works depot. The centre has removed many retailers and financial services from the existing local areas, creating a questionable positive impact on local shopping. The centre is surrounded by carparks with few pedestrian access routes.[citation needed]

A smaller centre, Cresthaven Shopping Centre opened in 2003. Several other clusters of shops are located throughout Bateau Bay.[citation needed]

Bateau Bay Bowling Club is located on the corner of Pheasent Avenue and Bias Avenue. It is owned by the Canturbury Leagues Club and features TAB facilities, a bar, and a bistro, as well as an undercover carpark. The club has three bowling greens, has more active bowling members than any other club in the state,[citation needed] and is strong in competitions run statewide.

The Bateau Bay Hotel is located on The Entrance Road between Lumby Drive and Cresthaven Avenue. Its approval date for building was 4 February, and the day of opening was 8 September, in 1980. It features a large carpark as well as TAB facilities, two bar areas, drive-through bottle shop, bistro, and beer garden, as well as a motel. 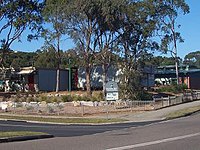 There is one school in Bateau Bay: was established in 1980 and has an enrolment of 739 students in Kindergarten to Year 6. It was originally located in Brooke Avenue (within Killarney Vale) in demountable buildings before relocating. A school remained at Brooke Avenue due to housing development in the period of planning and construction.

Bateau Bay sewerage treatment plant was built in the late 1960s when at the time there was very little nearby development. Treated sewage is discharged into the sea off Bateau Bay at Wonga Point. Some people protest that sewage may end up on the nearby beaches. There has been no major sea pollution from the plant, there is a smell though over the Eastern side of the suburb.[3] The treatment plant has operated for longer than most people have been resident.

Red Bus on The Entrance Road