Lidcombe is a suburb in western Sydney, in the state of New South Wales, Australia. Lidcombe is located 15 km (9.32 mi) west of the Sydney central business district, in the local government areas of Cumberland Council and City of Parramatta.

Lidcombe is located west of Rookwood Cemetery, the largest cemetery in the Southern Hemisphere.

Samuel Haslam owned various grants beside Haslams Creek from 1804. A railway station called Haslam's Creek was opened in this area in 1859, on the railway line from Sydney to Parramatta. Haslam's Creek is sometimes referred to as Haslem's Creek.[2]

Although it had not been intended to construct a station at Haslam's Creek, the then owner of the land where the station now stands, Father John Joseph Therry, together with nearby landholders Potts and Blaxland, agreed to pay £700 to enable its construction.[3]

Haslam's Creek was the site of the first railway disaster in New South Wales in July 1858 which resulted in two deaths.[4]

When the necropolis opened in 1867 it was known as Haslam's Creek Cemetery.[5] Residents disliked the association with the burial ground and in 1876 the suburb was renamed Rookwood from a title of a novel by William Harrison Ainsworth (1805–1882). The name of the railway station was changed to Rookwood in 1878 and by the 1880s shops were established in the area. In 1891, the municipality of Rookwood was incorporated. Over time, the necropolis had become known as Rookwood Cemetery and by 1898 residents were again agitated about the association of their suburb with the cemetery.[5] In 1913, a new name was suggested to honour the previous mayor Henry John Larcombe and the serving mayor Frederick Lidbury. Syllables from the name of each alderman (Lidbury and Larcombe) were combined to form the name Lidcombe on 1 January 1914.[6] The municipality amalgamated with Auburn local government area in 1949.[7]

A large number of post-WWII European migrants, including a large number of Ukrainians, settled in the area of Lidcombe, and built a number of buildings including a church, 2 halls and 2 schools. Lidcombe is still the cultural centre of the Ukrainian community in Sydney. The population dynamics changed with the influx of Middle Eastern immigrants in the 1960s and 1970s.[8]

Lidcombe has a number of heritage-listed sites, including:

Lidcombe railway station is an important junction station. It is served by four suburban lines: 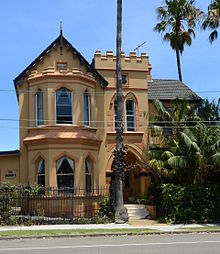 The Gables in East Street

North of the railway line:

South of the railway line:

Lidcombe has many places of worship including:

Lidcombe Public School, located on John Street, was established in 1879. The school has 600 students from the Lidcombe area and also caters for special education children with trained teachers in that field. The school provides extra-curricular education facilities such as a choir, dance group and PSSA sports team. There is a before and after-school care program located within the school. There is transport to and from the school by the 925 and M92 bus routes.[21]

St Joachim's Parish School [22] is a Catholic school on Mary Street. The Sisters of St Joseph founded the school in 1885 and remained active in the school until 1984. After that time the Sisters handed the Principalship over to lay staff who have continued to uphold the traditions and spirit of Blessed Mary MacKillop, who walked the playground and worked at the school, and her Josephite Sisters. The school caters for children up to Year 6.

Marist Brothers was a boys school located on Keating Street, behind St. Joachim's Catholic Church. It closed following the amalgamation of several Catholic schools in the area. The school catered for boys up to Year 6. This site is used for various Catholic Church enterprises, including the Inner Western Regional Office of the Catholic Education Office, Sydney, the Catholic Adult Education Centre and a bookstore specialising in Catholic publications ("The Mustard Seed").

Commercial and industrial developments are located along Parramatta Road and surrounding areas. The area close to the train station has a lot of restaurants mainly offering Korean food.

Lidcombe Oval, situated in Church Street, on the northern side of the railway line, was the home ground of the Western Suburbs Magpies from 1967–1986. The playing surface is enclosed by a cycling track. The ground earned a reputation as a fortress for the home side, particularly in the late 1970s to the early 1980s when the Magpies were at their most competitive. Games against rivals Parramatta Eels and Manly-Warringah Sea Eagles would usually draw large crowds during this era. The attendance record for the venue is 21,015 (Wests vs Parramatta, 30 July 1978).

Carnarvon Golf Course, located at Nottinghill Road and Joseph Street, reflects the social history of Lidcombe. The first site was in use from 1927 to 1932 and occupied an area running east and west on the northern side of Parramatta Road, Lidcombe between Wetherill Street and Hill Road in an area currently covered by the M4 Western Motorway. The "Old Course" was in an area of three paddocks north of Fariola Street in an area owned by the Newington State Hospital (now Silverwater Correctional Centre) which consisted of nine holes in the top paddock (holes one-eight and eighteen). Seven holes in the bottom paddock, now Wilson Park, and the sixteenth and seventeenth holes in a paddock leased from Lidcombe Council on the southern side of Holker Street. This course was in use from 1932 until early 1943 when the top paddock and the Clubhouse were taken over by the U.S. Navy during World War II. The Silverwater Course was used from 1942 to 1949 and was a nine-hole course where the bottom paddock held holes one-two and five-nine with the third and fourth holes in the Council paddock. The present site which originally consisted of Lidcombe Sports and Showground and the western grazing paddock of Lidcombe State Hospital was obtained in 1947 and officially opened in December, 1949.[23]

The Ruth Everuss Aquatic Centre (formerly known as the Auburn Swim Centre), located on Church Street, has indoor and outdoor swimming facilities. The centre is currently closed for major renovations and should be open again in 2017. The Centre is named after Ruth Everuss, the Australian Olympic swimmer who won a silver medal in the women's 4 × 100 m freestyle relay at the 1960 Summer Olympics in Rome.[24]

Lidcombe was, up until recent years a traditional working-class suburb. Over the past decade, Lidcombe has experienced the processes of gentrification. Today, the suburb is cosmopolitan, reflecting the waves of immigration to post war Australia.In 2018 Lidcombe is home to a large Korean community. Many Korean run businesses have restaurant, cafés, hairdressing and beauty services.