The cover of an edition of the Liber Iudiciorum from 1600.

The Visigothic Code (Latin: Forum Iudicum, Liber Iudiciorum; Spanish: Libro de los Jueces, Book of the Judges), also called Lex Visigothorum (English: Law of the Visigoths), is a set of laws first promulgated by king Chindasuinth (642–653 AD) of the Visigothic Kingdom in his second year of rule (642–643) that survives only in fragments. In 654 his son, king Recceswinth (649–672), published the enlarged law code, which was the first law code that applied equally to the conquering Goths and the general population, of which the majority had Roman roots, and had lived under Roman laws.

The code abolished the old tradition of having different laws for Romans (leges romanae) and Visigoths (leges barbarorum), and under which all the subjects of the Visigothic kingdom would stop being romani and gothi instead becoming hispani. In this way, all subjects of the kingdom were gathered under the same jurisdiction, eliminating social and legal differences, and allowing greater assimilation of the populations.[1] As such, the Code marks the transition from the Roman law to Germanic law and is one of the best surviving examples of leges barbarorum. It combines elements of the Roman law, Catholic law and Germanic tribal customary law.

During the first centuries of Visigothic rule, Romans were ruled by different laws than Goths were. The earliest known Visigothic laws are the Code of Euric, which were compiled by roughly 480 A.D. The first written laws of the Visigothic kingdom were compiled during the rule of king Alaric II and were meant to regulate the lives of Romans, who made up the majority of the kingdom and were based on the existing Roman imperial laws and their interpretations. The Breviarium (Breviary of Alaric) was promulgated during the meeting of Visigothic nobles in Toulouse on February 2, 506.[2]

During the reign of king Leovigild an attempt was made to unite the laws regulating the lives of Goths and Romans into a revised law code, Codex Revisus. In 589, at the Third Council of Toledo, the ruling Visigoths and Suebi, who had been Arian Christians, accepted Roman Christianity (what became modern Catholicism). Now that the formerly Roman population and the Goths shared the same faith King Reccared issued laws that equally applied to both populations.[3] 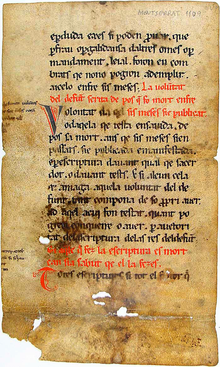 Fragment of an 11th-century Liber Judiciorum translation to the old Catalan language.[4] Guarded at Santa Maria of Montserrat Abbey on the Montserrat mountain, Catalonia (Spain).

The code of 654 was enlarged by the novel legislation of Recceswinth (for which reason it is sometimes called the Code of Recceswinth) and later kings Wamba, Erwig, Egica, and perhaps Wittiza. Recceswinth's code was edited by Braulio of Zaragoza, since Chindasuinth's original code had been hastily written and promulgated.[5]

During the Twelfth Council of Toledo in 681, King Erwig asked that the law code be clarified and revised. Some new laws were added, out of which 28 dealt with Jews.[6]

The laws were far-reaching and long in effect: in 10th-century Galicia, monastic charters make reference to the Code.[7] The laws govern and sanction family life and by extension political life: marriage, the transmission of property to heirs, safeguarding the rights of widows and orphans. Particularly with the Visigoth's Law Codes, women could inherit land and title, were allowed to manage land independently from their husbands or male relations, dispose of their property in legal wills if they had no heirs, could represent themselves and bear witness in court by age 14 and arrange for their own marriages by age 20.[8]

The laws combined the Catholic Church's Canon law, and as such have a strongly theocratic tone.

The code is known to have been preserved by the Moors,[citation needed] as Christians were permitted the use of their own laws, where they did not conflict with those of the conquerors, upon the regular payment of jizya tribute. Thus it may be presumed that it was the recognized legal authority of Christian magistrates while the Iberian Peninsula remained under Muslim control. When Ferdinand III of Castile took Córdoba in the thirteenth century, he ordered that the code be adopted and observed by his subjects, and had it translated, albeit inaccurately, into the Castilian language, as the Fuero Juzgo. The Catalan translation of this document, "Llibre Jutge", is among the oldest literary texts in that language (c. 1050). In 1910 an English translation of the code by Samuel Parsons Scott was published,[9] but it received some severe criticism.[10]

The following is a list of the books and titles which form the Visigothic Code.[citation needed]

0.32 km
No Reviews
Favourite
Link to Town: Kyabram
The cover of an edition of the Liber Iudiciorum from 1600. The Visigothic Code (Latin: Forum Iudicum, Liber Iudiciorum; Spanish: Libro de los Jueces, Book of the Judges), also called Lex Visigothorum (English: Law of the Visigoths), is a set of laws first promulgated by king Chindasuinth (642–653 AD) of the Visigothic Kingdom in his second year of rule (642–643) Read more…
View all business in Kyabram
How to whitelist website on AdBlocker?