For other uses, see Tribe (disambiguation).
"Tribals" redirects here. For the ancient Thracian tribe, see Triballi.
Social group existing before the development of, or outside of, states; Alternately, a sovereign nation 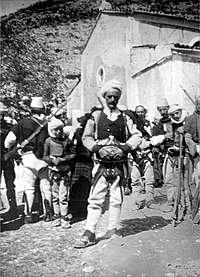 Men of the Shkreli tribe at the feast of Saint Nicholas at Bzheta in Shkreli territory, Albania, 1908

The term tribe is used in many different contexts to refer to a category of human social group. The predominant usage of the term is in the discipline of anthropology. The definition is contested, in part due to conflicting theoretical understandings of social and kinship structures, and also reflecting the problematic application of this concept to extremely diverse human societies. The concept is often contrasted by anthropologists with other social and kinship groups, being hierarchically larger than a lineage or clan, but smaller than a chiefdom, nation or state. These terms are equally disputed. In some cases tribes have legal recognition and some degree of political autonomy from national or federal government, but this legalistic usage of the term may conflict with anthropological definitions.

The word tribe first occurred in English in 12th-century Middle English-literature, in reference to the twelve tribes of Israel.[1] The Middle English word is derived from Old French tribu and, in turn, from Latin tribus (plural tribūs), in reference to a supposed tripartite division of the original Roman state along ethnic lines, into tribūs known as the Ramnes (or Ramnenses), Tities (or Titienses), and Luceres, corresponding, according to Marcus Terentius Varro, to the Latins, Sabines and Etruscans respectively. The Ramnes were named after Romulus, leader of the Latins, Tities after Titus Tatius, leader of the Sabines, and Luceres after Lucumo, leader of an Etruscan army that had assisted the Latins. In 242–240 BC, the Tribal Assembly (comitia tributa) in the Roman Republic included 35 tribes (four "urban tribes" and 31 "rural tribes"). According to Livy, the three "tribes" were squadrons of cavalry, rather than ethnic divisions.

Considerable debate has accompanied efforts to define and characterize tribes. In the popular imagination, tribes reflect a primordial social structure from which all subsequent civilizations and states developed. Anthropologist Elman Service presented[3] a system of classification for societies in all human cultures, based on the evolution of social inequality and the role of the state. This system of classification contains four categories:

Tribes are therefore considered to be a political unit formed from an organisation of families (including clans and lineages) based on social or ideological solidarity. Membership of a tribe may be understood simplistically as being an identity based on factors such as kinship ("clan"), ethnicity ("race"), language, dwelling place, political group, religious beliefs, oral tradition and/or cultural practices.

Archaeologists continue to explore the development of pre-state tribes. Current research suggests that tribal structures constituted one type of adaptation to situations providing plentiful yet unpredictable resources. Such structures proved flexible enough to coordinate production and distribution of food in times of scarcity, without limiting or constraining people during times of surplus.

The term "tribe" was in common use in the field of anthropology until the late 1950s and 1960s. The continued use of the term has attracted controversy among anthropologists and other academics active in the social sciences, with scholars of anthropological and ethnohistorical research challenging the utility of the concept. In 1970, anthropologist J. Clyde Mitchell wrote:

The tribe, a long respected category of analysis in anthropology, has recently been the object of some scrutiny by anthropologists ... Doubts about the utility of the tribe as an analytical category have almost certainly arisen out of the rapid involvement of peoples, even in the remotest parts of the globe, in political, economic and sometimes direct social relationship with industrial nations. The doubts, however, are based ultimately on the definition and meaning which different scholars give to the term 'tribe', its adjective 'tribal', and its abstract form 'tribalism'.[4]

Despite the membership boundaries for a tribe being conceptually simple, in reality they are often vague and subject to change over time. In his 1975 study, The Notion of the Tribe, anthropologist Morton H. Fried provided numerous examples of tribes that encompassed members who spoke different languages and practiced different rituals, or who shared languages and rituals with members of other tribes. Similarly, he provided examples of tribes in which people followed different political leaders, or followed the same leaders as members of other tribes. He concluded that tribes in general are characterized by fluid boundaries, heterogeneity and dynamism, and are not parochial.[5]

Part of the difficulty with the term is that it seeks to construct and apply a common conceptual framework across diverse cultures and peoples. Different anthropologists studying different peoples therefore draw conflicting conclusions about the nature, structure and practices of tribes. Writing on the Kurdish peoples, anthropologist Martin van Bruinessen argued, "the terms of standard anthropological usage, 'tribe', 'clan' and 'lineage' appear to be a straitjacket that ill fits the social reality of Kurdistan".[6]

There are further negative connotations of the term "tribe" that have reduced its use. Writing in 2013, scholar Matthew Ortoleva noted that "like the word Indian, [t]ribe is a word that has connotations of colonialism."[7] Survival International says "It is important to make the distinction between tribal and indigenous because tribal peoples have a special status acknowledged in international law as well as problems in addition to those faced by the wider category of indigenous peoples."[8]

A map of uncontacted tribes, around the start of the 21st century

Few tribes today remain isolated from the development of the modern state system. Tribes have lost their legitimacy to conduct traditional functions, such as tithing, delivering justice and defending territory, with these being replaced by states functions and institutions, such as taxation, law courts and the military. Most have suffered decline and loss of cultural identity. Some have adapted to the new political context and transformed their culture and practices in order to survive, whilst others have secured legal rights and protections.

Anthropologist Morton Fried proposed that most surviving tribes do not have their origin in pre-state tribes, but rather in pre-state bands. Such "secondary" tribes, he suggested, developed as modern products of state expansion. Bands comprise small, mobile, and fluid social formations with weak leadership. They do not generate surpluses, pay no taxes, and support no standing army. Fried argued that secondary tribes develop in one of two ways. First, states could set them up as means to extend administrative and economic influence in their hinterland, where direct political control costs too much. States would encourage (or require) people on their frontiers to form more clearly bounded and centralized polities, because such polities could begin producing surpluses and taxes, and would have a leadership responsive to the needs of neighboring states (the so-called "scheduled" tribes of the United States or of British India provide good examples of this). Second, bands could form "secondary" tribes as a means to defend against state expansion. Members of bands would form more clearly bounded and centralized polities, because such polities could begin producing surpluses that could support a standing army that could fight against states, and they would have a leadership that could co-ordinate economic production and military activities.

In the Scheduled Castes and Scheduled Tribes of India and Native American tribes of North America, tribes are considered polities, or sovereign nations, that have retained or been granted legal recognition and some degree of autonomy by a national or federal government.

0.32 km
No Reviews
Favourite
Link to Town: Kyabram
For other uses, see Tribe (disambiguation). "Tribals" redirects here. For the ancient Thracian tribe, see Triballi. Social group existing before the development of, or outside of, states; Alternately, a sovereign nation Men of the Shkreli tribe at the feast of Saint Nicholas at Bzheta in Shkreli territory, Albania, 1908 The term tribe is used in many different contexts to refer Read more…
View all business in Kyabram
How to whitelist website on AdBlocker?