The Bulletin was an Australian magazine first published in Sydney on 31 January 1880. The publication's focus was politics and business, with some literary content, and editions were often accompanied by cartoons and other illustrations. The views promoted by the magazine varied across different editors and owners, with the publication consequently considered either on the left or right of the political spectrum at various stages in its history. The Bulletin was highly influential in Australian culture and politics until after the First World War, and was then noted for its nationalist, pro-labour, and pro-republican writing. It was revived as a modern news magazine in the 1960s, and was Australia's longest running magazine publication until the final issue was published in January 2008.[1] 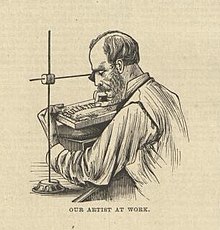 Lithographer at work creating the masthead for The Bulletin in 1880

The Bulletin was founded by J. F. Archibald and John Haynes, with the first issue being published in 1880.[2] The original content of The Bulletin consisted of a mix of political comment, sensationalised news, and Australian literature.[3] For a short period in 1880, their first artist William Macleod was also a partner.[4][5]

In the early years, The Bulletin played a significant role in the encouragement and circulation of nationalist sentiments that remained influential far into the next century. Its writers and cartoonists regularly attacked the British, Chinese, Japanese, Indians, Jews, and Aborigines.[6] In 1886, editor James Edmond changed The Bulletin's nationalist banner from "Australia for Australians" to "Australia for the White Man".[3] An editorial, published in The Bulletin the following year, laid out its reasons for choosing such banners:[7]

By the term Australian we mean not those who have been merely born in Australia. All white men who come to these shores—with a clean record—and who leave behind them the memory of the class distinctions and the religious differences of the old world ... all men who leave the tyrant-ridden lands of Europe for freedom of speech and right of personal liberty are Australians before they set foot on the ship which brings them hither. Those who ... leave their fatherland because they cannot swallow the worm-eaten lie of the divine right of kings to murder peasants, are Australian by instinct—Australian and Republican are synonymous.

As The Bulletin evolved, it became known as a platform for young and aspiring writers to showcase their short stories and poems to large audiences. By 1890, it was the focal point of an emerging literary nationalism known as the "Bulletin School", and a number of its contributors, often called bush poets, have become giants of Australian literature. Notable writers associated with The Bulletin at this time include:

A number of notable artists provided illustrations and cartoons for the publication. These include,

According to The Times of London, "It was The Bulletin that educated Australia up to Federation".[9]

In his 1923 novel Kangaroo, English author D. H. Lawrence wrote of a character who reads The Bulletin and appreciates its straightforwardness and the "kick" in its writing: "It beat no solemn drums. It had no deadly earnestness. It was just stoical and spitefully humorous."[10] In The Australian Language (1946), Sidney Baker wrote: "Perhaps never again will so much of the true nature of a country be caught up in the pages of a single journal". The Bulletin continued to support the creation of a distinctive Australian literature into the 20th century, most notably under the editorship of Samuel Prior (1915–1933), who created the first novel competition.[3]

The publication was folio size and initially consisted of eight pages, increasing to 12 pages in July 1880, and had reached 48 pages by 1899. The first issue sold for four pence, later reduced to three pence, and then, in 1883, was increased to six pence.[11]

The literary character of The Bulletin continued until 1961, when it was brought by Australian Consolidated Press (ACP), merged with the Observer (another ACP publication), and shifted to a news magazine format.[3] Donald Horne was appointed as chief editor and quickly removed "Australia for the White Man" from the banner. The magazine was costing ACP more than it made, but they accepted that price "for the prestige of publishing Australia's oldest magazine".[6] Kerry Packer, in particular, had a personal liking for the magazine and was determined to keep it alive.[12]

In 1974, as a result of its publication of a leaked Australian Security Intelligence Organisation discussing Deputy Prime Minister Jim Cairns, the Whitlam Government called the Royal Commission on Intelligence and Security.[13]

In the 1980s and 1990s, The Bulletin's "ageing subscribers were not being replaced and its newsstand visibility had dwindled".[12] Trevor Kennedy convinced publisher Richard Walsh to return to the magazine. Walsh promoted Lyndall Crisp to be its first female editor, but James Packer then advocated that former 60 Minutes executive producer Gerald Stone be made editor-in-chief. Later, in December 2002, Kerry Packer anointed Garry Linnell as editor-in-chief.

Kerry Packer died in 2005, and in 2007 James Packer sold controlling interest in the Packer media assets (PBL Media) to the private equity firm CVC Asia Pacific.[12] On 24 January 2008, ACP Magazines announced that it was shutting The Bulletin. Circulation had declined from its 1990s' levels of over 100,000 down to 57,000,[6] which has been attributed in part to readers preferring the internet as their source for news and current affairs.[14]

The Bulletin had many editors over its time in print, and these are listed below:

Samuel Henry Prior (10 January 1869 – 6 June 1933) was an Australian journalist and editor, best known for his editorship and ownership of The Bulletin.[16] Born in Brighton, South Australia, Prior was educated at Glenelg Grammar School and the Bendigo School of Mines and Industries. He started his career as a teacher, before becoming a mining reporter at the Bendigo Independent. In 1887, he was assigned to Broken Hill, New South Wales, to report on the silver mine.[25][16] He was briefly editor at the Broken Hill Times and then at its successor, Broken Hill Argus. In 1889, Prior joined the Barrier Miner as editor, remaining in the role for 14 years,[25] during which time he displayed nationalism and championed trade unionism and the Federation of Australia.[16]

After sending some of his work to J. F. Archibald at the Sydney Bulletin, he was appointed finance editor in 1903.[16] In this role, he increased importance of the "Wild Cat" column, a financial and investment news and insights column focused on mining companies, which eventually (by 1923) grew into Wild Cat Monthly. Prior was promoted to associate editor in 1912. In 1914, Archibald sold his shares in The Bulletin to Prior, making Prior the majority shareholder. In 1915, he became the senior editor, in which position he built The Bulletin's reputation for literature and for financial journalism.[16] In 1927, he was sold the remaining shares in The Bulletin and thus became not only its editor but its sole owner and manager. In 1928, he inaugurated the first Bulletin Novel Competition, offering aspiring writers prize money and the publishing of their work in The Bulletin.

Prior remained editor until 1933, when he died from heart disease. In 1935, his son established the S. H. Prior Memorial Prize for a work of Australian literature. Prior's family retained control of the magazine until it was bought by Consolidated Press Ltd in 1960.[16]

Garry Linnell joined The Bulletin in 2001 and became editor-in-chief in 2002, when the magazine was already dropping in circulation and running at a loss. On one occasion, Kerry Packer called Linnell to his office, and, when Linnell asked what Packer wanted for The Bulletin, Packer said: "Son, just make 'em talk about it."[26] When former Prime Minister Paul Keating sent Linnell a letter criticising the magazine and calling it "rivettingly mediocre", Linnell published the letter in the magazine, promoted that "Paul Keating Writes for Us", and awarded Keating with "Letter of the Week", with the prize for that being a year's subscription to the magazine.[27] In 2005, Linnell offered a $1.25-million reward to anyone who found an extinct Tasmanian tiger.[12]