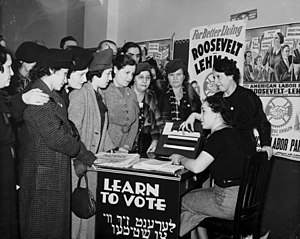 politiká, 'affairs of the cities') is the set of activities that are associated with making decisions in groups, or other forms of power relations between individuals, such as the distribution of resources or status. The academic study of politics is referred to as political science.

Politics is a multifaceted word. It may be used positively in the context of a "political solution" which is compromising and non-violent, or descriptively as "the art or science of government", but also often carries a negative connotation. For example, abolitionist Wendell Phillips declared that "we do not play politics; anti-slavery is no half-jest with us." The concept has been defined in various ways, and different approaches have fundamentally differing views on whether it should be used extensively or limitedly, empirically or normatively, and on whether conflict or co-operation is more essential to it.

A variety of methods are deployed in politics, which include promoting one's own political views among people, negotiation with other political subjects, making laws, and exercising force, including warfare against adversaries. Politics is exercised on a wide range of social levels, from clans and tribes of traditional societies, through modern local governments, companies and institutions up to sovereign states, to the international level. In modern nation states, people often form political parties to represent their ideas. Members of a party often agree to take the same position on many issues and agree to support the same changes to law and the same leaders. An election is usually a competition between different parties.

A political system is a framework which defines acceptable political methods within a society. The history of political thought can be traced back to early antiquity, with seminal works such as Plato's Republic, Aristotle's Politics, Chanakya's Arthashastra and Chanakya Niti (3rd Century BCE), as well as the works of Confucius.

The Act of Independence of Lithuania was signed by the Council of Lithuania on 16 February 1918, proclaiming the restoration of an independent State of Lithuania, governed by democratic principles, with Vilnius as its capital. The act was signed by all twenty members of the council, chaired by Jonas Basanavičius. The act of 16 February was the end result of a series of resolutions on the issue, including one issued by the Vilnius Conference and the act of 8 January. The path to the act was long and complex because the German Empire exerted pressure on the council to form an alliance. The Council had to carefully manoeuvre between the Germans, whose troops were present in Lithuania, and the demands of the Lithuanian people. While the act's original document has been lost, its legacy continues. The laconic act is the legal basis for the existence of modern Lithuania, both during the interwar period and since 1990. The act formulated the basic constitutional principles that were and still are followed by all Constitutions of Lithuania. The act itself was a key element in the foundation of Lithuania's Act of the Re-Establishment of the State of Lithuania, adopted on 11 March 1990. Lithuania, breaking away from the Soviet Union, stressed that it was simply re-establishing the independent state that existed between the world wars and that the act never lost its legal power. 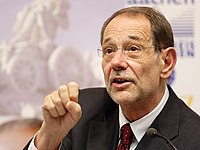 Dr. Javier Solana was the High Representative for the Common Foreign and Security Policy and the Secretary-General of both the Council of the European Union (EU) and the Western European Union (WEU). This photograph shows him discussing with students of RWTH Aachen University, one day before receiving the International Charlemagne Prize of the city of Aachen.

Wikinews on Politics and conflicts

Samuel Adams was an American statesman, politician, writer, and political philosopher, and one of the Founding Fathers of the United States. Adams was instrumental in garnering the support of the colonies in rebellion against Great Britain, ultimately resulting in the American Revolution. He was also one of the key architects of the principles of American republicanism that shaped American political culture. Adams organized protests against the British, including the Boston Tea Party in 1773, and participated in the Continental Congress. He also advocated for the adoption of the Declaration of Independence at the Second Continental Congress. Following the American Revolution, Adams helped draft the Articles of Confederation. After the war ended, he ran for the House of Representatives in the 1st United States Congressional election, but was unsuccessful in his bid. He was elected Lieutenant Governor of Massachusetts in 1789 and after John Hancock's death in 1793, Adams served as the acting governor, until he was elected governor in January of the following year. He served in that position until June 1797 when he decided to retire from politics.