Michael Francis McCormack (born 2 August 1964) is an Australian politician who has been leader of the National Party and Deputy Prime Minister of Australia since February 2018. He is also Minister for Infrastructure, Transport and Regional Development, having previously served as Minister for Defence Personnel and Minister for Veterans' Affairs from 2017 to 2018. McCormack has been a member of the House of Representatives since 2010, representing the Division of Riverina in New South Wales. He was a newspaper editor before entering politics.

McCormack was born in Wagga Wagga, New South Wales as one of five children born to Mrs Eileen Margaret McCormack (née Margosis; 1938–2018)[1][2] and her husband Lance McCormack (d. 2008),[3] a dryland farmer. His maternal grandfather, George Peter Margosis, was born in 1896 in Akrata, Greece; his other three grandparents were born in New South Wales.[4][5][6] He had four siblings, Denise, Robyn, Julieanne and Mark.[2] He grew up on the family farms in nearby Marrar and . He attended St Michael's Regional High School and Trinity Senior High School (later merged into Kildare Catholic College).[7] After leaving school, McCormack took up a cadetship at The Daily Advertiser, the local daily newspaper. He was appointed editor of the paper in 1991, aged 27, making him reputedly the "youngest newspaper editor in Australia".[8]

McCormack was sacked from The Daily Advertiser in February 2002. In response, "more than 20 journalists, photographers and other editorial staff" staged a 24-hour walkout.[9] McCormack went on to sue the Riverina Media Group for unfair dismissal, and in 2003 settled out of court for an undisclosed amount.[10] He subsequently started his own media and publishing company, MSS Media Services and Solutions.[11] McCormack also served as a director of the Murrumbidgee Turf Club from 1994 to 2003, as well as its official historian.[12] 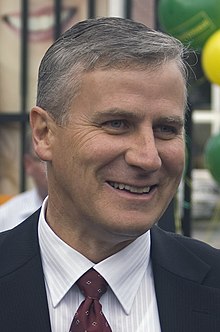 McCormack was campaign director for Kay Hull, the Nationals MP for Riverina, at the 2004 and 2007 federal elections. Hull announced her retirement from politics in April 2010, and McCormack subsequently won preselection for her seat at the 2010 election.[13] The Liberals stood a candidate in Riverina for the first time since 1998, but that had little impact on the result, with the Nationals recording a 3.6-point positive swing on a two-party-preferred basis.[14]

In July 2016, after the 2016 election, McCormack was appointed Minister for Small Business. In that capacity, he was responsible for the Australian Bureau of Statistics (ABS), which conducted the 2016 national census and the Australian Marriage Law Postal Survey during his tenure.[16][17] He opposes same-sex marriage, but voted in favour of the Marriage Amendment (Definition and Religious Freedoms) Act 2017 after promising to vote in line with the survey result in his constituency.[18] In a ministerial reshuffle in December 2017, McCormack was made Minister for Defence Personnel, Minister for Veterans' Affairs, and Minister Assisting the Prime Minister for the Centenary of ANZAC, positions which had previously been held by Dan Tehan.[15]

When Warren Truss retired as leader of the National Party in February 2016, McCormack publicly contemplated standing as his replacement.[19] He eventually chose not to run for the leadership, allowing Barnaby Joyce to win the position unopposed. He did stand for the deputy leadership (which Joyce had vacated), but lost to Senator Fiona Nash reportedly by only a single vote.[20] In December 2017, McCormack again contested the deputy leadership of the National Party, which had been made vacant as a result of Fiona Nash's disqualification from parliament. He was defeated by Bridget McKenzie, once again losing by only one vote.[21]

Following the resignation of Barnaby Joyce in February 2018, McCormack announced that he would contest the resulting leadership vote.[22] Several other MPs publicly endorsed him for the position, and the only other announced candidate, David Gillespie, withdrew his candidacy the day before the election. George Christensen launched a last-minute bid for the leadership, but was defeated by McCormack, who succeeded Joyce as Deputy Prime Minister of Australia.[23] He also replaced Joyce as Minister for Infrastructure and Transport.[24]

After the Coalition won the 2019 federal election, McCormack was re-elected party leader unopposed.[25]

McCormack married Catherine Shaw in 1986, with whom he has three children,[7] Georgina, Alexander and Nicholas.[2] In 1995, he became the owner of "the biggest collection of bound volumes of The Times anywhere in the world outside London", acquiring 900 volumes from Charles Sturt University when it ran out of storage space.[26]

In 1993, McCormack published a controversial editorial in which he blamed homosexuality for AIDS and criticised pride parades. He wrote that "a week never goes by anymore that homosexuals and their sordid behaviour don't become further entrenched in society [...] unfortunately gays are here and, if the disease their unnatural acts helped spread doesn't wipe out humanity, they’re here to stay". He asked "how can these people call for rights when they're responsible for the greatest medical dilemma known to man – Acquired Immune Deficiency Syndrome?" His article was the subject of three complaints to the Australian Press Council, though none were upheld.[27] In further editorials from the same period he said "I’m not sorry, why should I be?" about his views, and branded himself "homophobic".[28] McCormack subsequently wrote a second editorial apologising for the first.[29] His remarks resurfaced when he embarked on a career in politics, and he issued further apologies in 2010 and 2017, stating that he had "grown and learnt not only to tolerate, but to accept all people regardless of their sexual orientation or any other trait or feature which makes each of us different and unique".[30][31] Despite his apologies, the controversy resurfaced after he became Deputy Prime Minister.[32]

In other editorials, he called for the return of caning in high schools, saying "there is nothing wrong, in my opinion, with students [...] being given a 'stinging reminder' about how to conduct themselves", compared women's soccer to an "egg and spoon race", and advocated for the death penalty. When asked for comment by The Guardian, he said that "editorial views expressed more than 25 years ago in no way reflect how my views and community views have changed since publication [...] as people get older and start families, and grow as members of their community it is completely reasonable their views change over time"[28]

In August 2019, McCormack was Acting Prime Minister while the Prime Minister, Scott Morrison, was at a Pacific Islands Forum. Morrison was being criticised by Pacific Islands leaders for Australia's contribution to global warming and rising sea levels, which threatened their low-lying territories. McCormack assured an Australian audience: "They’ll continue to survive because many of their workers come here and pick our fruit".[33]

In November 2019, during the Australian bushfire crisis, he dismissed climate change as the concerns of "raving inner-city lefties".[34]