Consulates and legations were operating in Australian cities long before the Commonwealth of Australia was founded in 1901. The United States opened a consulate in Sydney in 1836, with other countries later following including Switzerland (1855), Germany (1879) and Japan (1896, in Townsville).

The diplomatic corps was first established in Canberra in 1936 when the United Kingdom appointed its first High Commissioner to Australia. Canada appointed a representative in 1937 and the United States of America opened a mission in 1940. In 1946, Australia and the United States upgraded their diplomatic relations to the ambassadorial level and exchanged ambassadors in September of that year.[1] Other countries, including France, Canada and Sweden, followed soon afterwards.

Initially residences and chanceries were in the Canberra suburbs of Red Hill and Forrest. The majority of missions are today in the lakeside suburb of Yarralumla or the suburb of O'Malley in the Woden Valley.

Some countries have chosen not to establish an embassy in Canberra but instead operate a consulate in a major city, such as Melbourne (Oman) and Brisbane (Nauru). 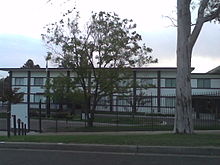 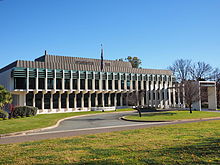 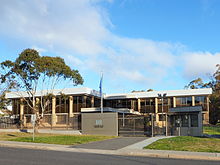 The Delegation of the European Union to Australia

Resident in Tokyo unless otherwise listed 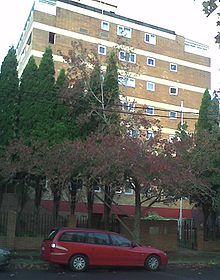 The building which houses the Russian Consulate-General in Sydney