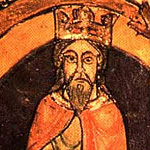 David I, who codified the Laws of the Bretts and Scotts.

The Leges inter Brettos et Scottos or Laws of the Brets and Scots was a legal codification under David I of Scotland (reigned 1124 – 1153). Only a small fragment of the original document survives, describing the penalties for several offences against people.

Aside from the document's intrinsic importance to Scottish history, it is significant in its similarity to corresponding areas both of Irish Brehon law and of Welsh law, which are better-preserved than the laws of medieval southern Scotland, allowing reasonable conjectures to be made regarding the laws and customs of the region, as few historical records exist.

The Laws or their precursor were relevant in the early twelfth century, as the Laws of the Four Burghs (Latin: Leges Quatuor Burgorum) explicitly banned parts of it relating to the cro (or weregild).[2][3] [expl 1]

The Laws are known to have been relevant until 1305, as Edward I of England specifically abolished them in that year,[4] following his invasion of Scotland. There is no further mention of them, and when Scotland successfully reasserted its independence, the feudal Scots law then became applicable.

The surviving clauses[5] show the society's origins as a tribal culture, where a perpetrator's family is responsible for the perpetrator's transgressions, and the family of a victim is compensated for the loss of a family member. As with other Celtic societies, the rights and obligations of women are explicitly guaranteed (though at a lesser standing than that of men). Marriages are treated as relationships between different families, and payments accrue to the family of the victim's spouse under some circumstances, but accrue to the victim's family under other circumstances.

Definition of the penalties

Penalty amount according to social position

The amounts to be paid were on a scale according to the social position of the victim, with the king at the top with the greatest value, then with a lesser amount for his son or high-ranking noble, an even lesser amount for other nobles, and so on down to the least amount for a common person. Amounts for homicide were given both as a number of cows, and as an equivalent amount of gold. Amounts for wounding or insult were given in gold only.

Payments for a female victim were one third less than that of her husband (but equal to that of her brother if she were unmarried), and make clear that women retained their original kinship and rights after marriage, as death penalties were owed by her family (and not by her husband's family), while death payments were made to her family (and not to the husband's family). Also, the importance of the marriage is acknowledged in that some payments for insult accrue to the spouse of the victim, rather than to the victim's family.

0.32 km
No Reviews
Favourite
Link to Town: Kyabram
David I, who codified the Laws of the Bretts and Scotts. The Leges inter Brettos et Scottos or Laws of the Brets and Scots was a legal codification under David I of Scotland (reigned 1124 – 1153). Only a small fragment of the original document survives, describing the penalties for several offences against people. Historically, the term "Brets" refers to Read more…
View all business in Kyabram
How to whitelist website on AdBlocker?