Konrad Maurer, painting by Knud Bergslien (1876), today in the University of Oslo.

Bust of Konrad Maurer by the sculptor Joseph Echteler (1888), today in the National and University Library of Iceland 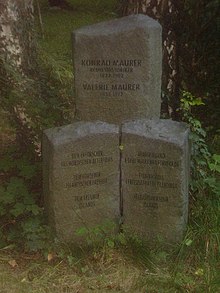 Konrad Maurer, since 1876 Konrad von Maurer (April 29, 1823 – September 16, 1902) was a German legal historian. He was the son of legal historian and statesman Georg Ludwig von Maurer (1790–1872). Maurer is considered one of the most significant researchers of Nordic legal and constitutional history.

Konrad Heinrich Maurer was born in 1823 in Frankenthal (Palatinate), as the only son of Georg Ludwig von Maurer und Friederike Maurer née Heydweiller. In 1826 the family moved to Munich (Bavaria), where his father was appointed professor of German legal history. Here, Konrad Maurer's mother died when he was seven. His father never remarried. Konrad Maurer spent two years of his childhood in Greece where his father was appointed a member of the council of regency of king Otto of Greece. Afterwards the family returned to Munich.

Bowing to his father's wish, Konrad Maurer studied law at the Universities of Munich, Leipzig and Berlin, earning his doctorate in 1845. In 1847 he became an associate professor, and in 1855 a full professor of legal history at the University of Munich.

Maurer was a leading authority of Germanic/Nordic legal and constitutional history. He had a special interest in Icelandic literature, history, language and culture and was an outspoken advocate for Icelandic political independence from Danish rule, supporting Jón Sigurðsson in his cause.

In 1858, Maurer undertook a personal travel to Iceland. Inspired by his contacts to Jacob Grimm (from the Brothers Grimm), he used the opportunity to collect Icelandic folk tales and published them after his return under the title Isländische Volkssagen der Gegenwart. This was the first detailed publication of Icelandic folk tales in German.

Maurer read lectures in Munich, Oslo, and Kopenhagen. In 1865, he was appointed a member of the Bavarian Academy of Sciences and Humanities, and in 1876 he was awarded (nonhereditary) knighthood of the Merit Order of the Bavarian Crown. By this he was officially given the title "(Ritter) von Maurer"; however he did not like the title and always preferred to be called just Maurer. In the same year, Maurer was offered his own chair at the University of Christiania, which he declined.

Throughout his life Maurer was a close friend to the Icelandic scholar Guðbrandur Vigfússon, the Norwegian folklorist Peter Christen Asbjørnsen, playwright Henrik Ibsen and writer Bjørnstjerne Bjørnson. He retired in 1888 and died 1902 in Munich, where he was buried in Alter Südfriedhof. His considerable library, which he had inherited from his father and expanded to over 9000 volumes, was sold in 1904, for the major part to Harvard University and the rest to the bar association of New York. A part of it is today in the libraries of Yale Law School and George Washington University Law School.