Katter's Australian Party (KAP) is a political party in Australia. It was formed by the independent and former Nationals Member of Parliament for Kennedy Bob Katter, with a registration application lodged to the Australian Electoral Commission in 2011. Katter has been the party's federal parliamentary leader since that time while his son Robbie is the leader in Queensland.[13]

In June 2018, independent and former One Nation Senator for Queensland Fraser Anning joined the party, but he was expelled in October 2018 for his inflammatory rhetoric concerning immigration.[14] 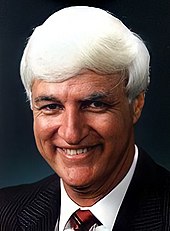 Under Queensland electoral law the party appears on the state election ballots only under its abbreviated name. To avoid ballot-box party names varying across Australian states, the KAP unsuccessfully appealed to the courts to have ballots reprinted so that the full party name and not the abbreviated one would appear on ballots for the 2012 Queensland state election.[18]

The party's policies closely mirror those of Katter, including support for industry (both agricultural and manufacturing) and opposition to privatisation and deregulation. The party's first policies announced by Katter include:

Although Katter himself is known to be a staunch social conservative, the party mostly does not actively pursue socially conservative policies, focusing mainly on economic issues. Although social conservatism is usually associated with issues such as abortion, the party does not have a position on this or most solely social policy issues as it is considered a matter of social conscience for individual party members.

In the 2013 federal election, Katter's Australian Party received 1.04% of the nationwide vote in first preferences in the lower house, and 0.89% nationwide in the Senate.[23] Its best performing state was Queensland with 3.75% of the lower-house vote and 2.94% of the Senate vote.

Katter retained his seat of Kennedy, despite a 16-point swing in favour of the Liberal Nationals.[24]

In the 2016 federal election, Katter's Australian Party received 0.54% of the nationwide vote in first preferences in the lower house, and 0.38% nationwide in the Senate.[25][26] Bob Katter retained his seat of Kennedy, with a swing of 8.93% towards him.[27] The party's next-best finish was in the Division of Capricornia, where Laurel Carter polled 7.08 percent of the vote.[28]

On 7 July 2016, while counting for the election was still underway and the final result uncertain, Katter announced that he would provide confidence and supply to the Turnbull Government in the event that it was reduced to minority government.[29] It proved unnecessary, as the Coalition finished with a one-seat majority. In August 2017, during the parliamentary eligibility crisis, Katter announced that he could not guarantee confidence and supply if the government lost its majority.[30]

The party fielded candidates at the 2012 Queensland state election.[13] Queensland Independent MP Rob Messenger had expressed interest in joining the party,[31] however following the merger with the Queensland Party, Messenger declared he would not join the new party as it intended to run against sitting independents at the election.[32]

On 30 October 2011, McLindon was joined by Shane Knuth, the Liberal National Party of Queensland (LNP) member for Dalrymple. Knuth, who was from the National half of the merger, objected to what he saw as a reduced voice for regional MPs in the merged party, calling it a Liberal takeover. He was also displeased with a number of tactics adopted by the LNP's organisational wing, such as grilling potential candidates and maintaining files about Labor MPs containing compromising information.[35]

In the 2012 Queensland state election, the party contested 76 of the 89 seats in the state legislature. Robbie Katter won Mount Isa—which is virtually coextensive with the western portion of his father's federal seat—while Knuth retained Dalrymple. McLindon was defeated in Beaudesert. Katter claimed that the Electoral Commission's decision not to print his name on the ballot cost the party 8.5% of the vote.[36]

On 25 November 2012, the party was joined by Condamine LNP MP Ray Hopper. Like Knuth, Hopper is from the National side of the merger. As Knuth had a year earlier, Hopper claimed that the LNP had been a takeover by the old Liberal Party at the expense of the National Party, and accused the LNP of deliberately purging National influence from the party. Hopper claimed to have spoken to eight other LNP backbenchers who were considering defection.[37] On 29 November Hopper was elected as the party's Queensland state leader.[38]

In the 2015 Queensland state election, the party contested 11 of the 89 seats, with Knuth and Katter retaining their seats, but Hopper failed in a bid for the seat of Nanango. Due to the election's close-run result (44 Labor to 42 LNP with either needing 45), KAP was potentially in a situation to choose the government, and met with both parties and published a list of 28 demands.[39] However, as independent MP Peter Wellington elected to support Labor on confidence and supply, this did not proceed further.

The Tasmanian Branch, led by Glenorchy Alderman Jenny Branch-Allen, claimed to have received many expressions of interest by potential candidates for the 2013 federal election.[40]

Ann Bressington, an independent (and formerly No Pokies) member of the South Australian Legislative Council, announced in October 2013 that she would sponsor registration for the party at the 2014 state election, although she did not join the party herself.[41]

In February 2014, the Country Alliance announced that it would merge with the Victorian Branch of Katter's Australian Party for the upcoming 2014 state election, following confirmation at an extraordinary general meeting of the party. The merged parties plan to contest the election as the "Australian Country Alliance".[42][43]

A 2019 report revealed that Katter's Australian Party has taken more than $808,760 from pro-gun groups during the 2011-2018 period.[46] The party received the most disclosed pro-gun donations of all Australian political parties.[46]