Joshua Anthony Frydenberg (born 17 July 1971) is an Australian politician who has been Treasurer of Australia and Deputy Leader of the Liberal Party since 24 August 2018. He has been a member of the Australian House of Representatives for the seat of Kooyong since August 2010.

Frydenberg served in various roles in the Abbott and Turnbull Governments from 2013 to 2018, including as Minister for Resources and Northern Australia, and as Minister for the Environment and Energy. On 24 August 2018, he was elected Deputy Leader of the Liberal Party following a leadership spill, which saw Scott Morrison elected as Leader. Morrison subsequently appointed Frydenberg Treasurer of Australia.

Frydenberg was born in Melbourne and educated at Bialik and Mount Scopus Colleges. His mother, Erika Strausz, is a psychologist and University of Melbourne professor and his father Harry is a general surgeon. His mother was a Jewish Hungarian born in 1943 who arrived in Australia in 1950 as a stateless child from a refugee camp after escaping from The Holocaust.[2] His father is also Jewish, and emigrated to Australia from Poland.

Frydenberg was a keen tennis player. He attempted, unsuccessfully, to drop out of high school to pursue a career in tennis. After graduating from high school, he took a gap year to play tennis full-time in Australia and Europe. Frydenberg played against Mark Philippoussis and Pat Rafter, and represented Australia at two World University Games. He and his father were present at the 1997 Maccabiah bridge collapse.[3][4]

Frydenberg studied and earned honours degrees in both economics and law at Monash University, where he became president of the Law Students Society,[5] before working at Mallesons Stephen Jaques, a large Australian commercial law firm. He subsequently attended University College, Oxford to study for the Master of International Relations degree in 1998 on a Commonwealth scholarship. Frydenberg has also attained a Master of Public Administration from the John F. Kennedy School of Government at Harvard University.[6]

Frydenberg early in his political career

In 1999, Frydenberg worked as an assistant adviser to Attorney-General Daryl Williams before becoming an adviser to Foreign Affairs Minister Alexander Downer, a post he held until 2003. From 2003 to 2005 he was a policy adviser to Prime Minister John Howard, specialising in domestic security issues, border protection, justice and industrial relations. In 2005 he took up a position as a Director of Global Banking with Deutsche Bank in the company's Melbourne office.[7]

In 2006, Frydenberg announced that he was seeking Liberal preselection for Kooyong, a comfortably safe Liberal seat in the eastern suburbs of Melbourne. The seat's incumbent member, Petro Georgiou, had held the seat since 1994. Kooyong is regarded as a Liberal "leadership seat", as the three men who held it before Georgiou (Andrew Peacock, Robert Menzies, and John Latham) all went on to lead the Liberal Party or its predecessors.

In the days leading to the preselection convention, Queensland frontbenchers Ian Macfarlane, Peter Dutton and Santo Santoro backed Frydenberg's credentials, for which they were criticised by former Victorian Premier Jeff Kennett.[8]

The preselection was held at Trinity Grammar School on 23 April 2006.[9] Georgiou received 62 of the 85 delegates' votes, with Frydenberg receiving 22 votes and a third candidate, Alastair Armstrong, receiving one vote. After Frydenberg's defeat, federal Treasurer and deputy Liberal leader Peter Costello, who represented the nearby seat of Division of Higgins, encouraged him to run for pre-selection in Chisholm, a marginal electorate neighbouring Kooyong, held by Anna Burke of the ALP. It had previously been held by one of Frydenberg's mentors, Michael Wooldridge. Frydenberg declined the offer, saying, "This is where I am from, this is where I feel most comfortable and this is where I think there is real work to be done."[10] After Georgiou had announced his intention to retire at the next election, Frydenberg won preselection to contest the seat of Kooyong after beating industrial lawyer John Pesutto at the Melbourne Convention Centre on 20 June 2009.[11] Frydenberg's candidacy was supported by references from former Prime Minister John Howard and former Opposition Leader Andrew Peacock.[12]

Georgiou retired ahead of the 2010 federal election. With the support of former Liberal state president Michael Kroger, Frydenberg won Liberal preselection,[13] and went on to win the seat with 52.56% of the primary vote and 57.55% of the two-party-preferred vote.[14] He was only the fifth person to represent this traditionally safe non-Labor seat in 88 years. He holds the seat that was once held by Australia's longest-serving Prime Minister, Robert Menzies.

In his maiden speech, he recounted the story of his Jewish grandparents' and great aunt's migration to Australia from Nazi controlled Europe and lauded the contribution of migrants to communities within his electorate. He enunciated his belief in small government, called for stronger ties with Asia while also maintaining a solid alliance with the US and proposed a target of having two Australian universities within the world's top ten by 2030.[15]

At the 2013 federal election, Frydenberg was re-elected with the largest swing to the Liberal Party in the seat since 1975. He was sworn in as a Parliamentary Secretary to the Prime Minister on 18 September 2013, with particular responsibility for the government's deregulation agenda. On 23 December 2014, Frydenberg was sworn in as Assistant Treasurer in a ministerial reshuffle and replaced Arthur Sinodinos, who resigned due to delays in an ICAC inquiry.[16][17]

Frydenberg in April 2018 with Siti Nurbaya Bakar, Indonesia's Minister of Environment and Forestry

In 2015, he declared that he had switched positions regarding same-sex marriage and publicly supported same sex marriage.[18]

With the re-election of the Turnbull Government in 2016, Frydenberg became the Minister for the Environment and Energy in the Second Turnbull Ministry.[19]

In the course of the 2017-18 Australian parliamentary eligibility crisis, suggestions were raised that Frydenberg might be in breach of Section 44 of the Constitution of Australia as his mother and her family had come to Australia as refugees from Hungary and his mother might be automatically considered a Hungarian citizen, so that Frydenberg would automatically have Hungarian citizenship by descent. Frydenberg rejected the claim, asserting that his mother had become stateless due to the war; he said that Hungary's imposition of citizenship on stateless refugees was akin to North Korea's imposing of citizenship. Documents from the National Archives show that Frydenberg's grandparents and mother were considered "Hungarian" when they arrived in Australia, but had applied for a certificate of exemption (from the provisions of the Immigration Act 1901–1949), listing their nationality as "stateless". Frydenberg said that this is evidence that his mother was stateless when she came to Australia.[20] Labor Party MPs were split on whether the matter should be investigated: Mark Dreyfus indicated that he would pursue the matter, but other Labor MPs requested that he desist. Ed Husic said that he felt uncomfortable with his party questioning the legal citizenship of stateless Jewish refugees escaping Europe. Mark Butler stated that it was not the party's official position to pursue the matter.[21] 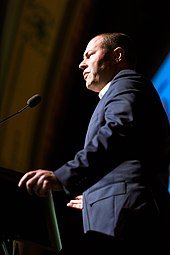 Two leadership spills were carried out by the Liberal Party in August 2018, with the second resulting in Treasurer Scott Morrison replacing Malcolm Turnbull as party leader and prime minister. Julie Bishop did not seek re-election as deputy leader, and in the resulting ballot Frydenberg won a majority in the first round with 46 votes, while Trade Minister Steven Ciobo received 20 and Health Minister Greg Hunt received 16.[22] During Morrison's subsequent press conference, he announced that Frydenberg would replace him as Treasurer.[23]

Frydenberg delivered his first federal budget in April 2019.[24] At the 2019 federal election, he retained his seat of Kooyong with a reduced majority, following a challenge from high-profile Greens candidate Julian Burnside.[25] Perceiving Burnside as a strong contender, the Liberal Party doubled its spending on the campaign in Kooyong, from $500,000 to $1 million.[26] Frydenberg received a primary swing of -8.2% against him, as well as the lowest Liberal vote in Kooyong in 97 years.[27]

In July 2019 a Kooyong resident petitioned the High Court, as Court of Disputed Returns, for a ruling that Frydenberg had been ineligible owing to foreign citizenship, being allegedly a citizen of Hungary.[28] On 23 November 2019 it was reported that Frydenberg had received confirmation from the Hungarian government that no record could be found of Hungarian citizenship of himself or his mother.[29] On 12 December 2019, since factual as well as legal questions remained unresolved, Justice Gordon of the High Court (who was critical of parties' delay) referred the case to the Federal Court.[30] On 17 March 2020, a Full Court of the Federal Court found on the basis of expert evidence that Frydenberg's maternal family had lost their Hungarian citizenship upon leaving Hungary, so that he was not and had never been a Hungarian citizen, and consequently he was not ineligible to be elected to the federal parliament.[31]

Frydenberg is married to Amie, and has two children, Gemma and Blake.[32]