This article is about the theological concept. For the collaborative composition by Liszt and others, see Hexameron (musical composition). 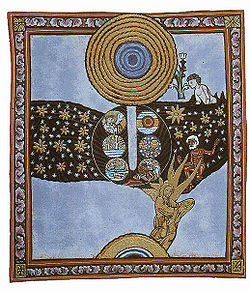 Representation of the six days of creation.

The term Hexameron (Greek: Ἡ Ἑξαήμερος Δημιουργία Hē Hexaēmeros Dēmiourgia) refers either to the genre of theological treatise that describes God's work on the six days of creation or to the six days of creation themselves. Most often these theological works take the form of commentaries on Genesis. As a genre, hexameral literature was popular in the early church and medieval periods. The word derives its name from the Greek roots hexa-, meaning "six", and hemer-, meaning "day".

Based on this framework, Christian and Jewish authors have written treatises that cover a wide variety of topics, including cosmology, science, theology, theological anthropology, and God's nature.

Saint Basil wrote an early and influential series of homilies around 370 AD which figure as the earliest extant Hexameron. Basil originally performed the work as a series of sermons, and later collected them into a written work which was influential among early church leaders.

Among the Latin Fathers, Ambrose and Augustine of Hippo wrote some of the earliest extant hexameral literature. Ambrose's Hexameron is heavily influenced by Basil's work of the same name. In contrast, Augustine wrote several works that serve as commentaries on the Genesis narrative, including the final section of The Confessions and The Literal Meaning of Genesis (published in 416).[2] One of the more influential elements of Augustine's writings is his argument that God created the world all at once. At the same time, this instantaneous creation included a progression of events. Thus, creation happened over six days and in one single event.

Hexameral literature is the medieval Christian literature based on the creation narratives found in the first two chapters of the Book of Genesis. It was commentary or elaboration, sometimes taking on encyclopedic scope, regarding the cosmological and theological implications of the world or universe created in six days.

It was didactic in nature.[3] The approach continued in an important literary role until the seventeenth century.

The Oxford English Dictionary recognizes a difference between ‘hexaemeric’, pertaining to a ‘hexaemeron’ or six-day creation (or commentary thereon); and ‘hexameral’, meaning simply in six parts. This distinction is often slurred.

Not every ‘Hexameron’ or ‘Hexaemeron’ is actually part of the genre, since Genesis commentaries can have various themes. Hexameral historical theories, of six or seven eras, date back at least to the City of God of Augustine of Hippo.

This literary genre was founded by the Hexaemeron of Basil of Caesarea; though it has been said that Philo started it.[4]

It extended into early modern times with the Sepmaines of Du Bartas, and Paradise Lost by John Milton. According to [10] the late sixteenth and early seventeenth century saw ‘hexameral theatre’, and in particular the visionary holism represented by the De la creación del mundo (1615) of . There is a cusp between Du Bartas, very influential in his time, and Milton: Milton's different approach marks the effective literary end of the genre.