Guthrum[b] (Old English: Guðrum, died c. 890) was King of the East Angles. He was one of the leaders of the 'Great Summer Army' that arrived in Reading during April 871, to join forces with the Great Danish Army. The Danish army's intention was to conquer the kingdoms that were Anglo-Saxon England. They conquered the kingdoms of East Anglia, Mercia, and Northumbria, as well as overrunning Alfred the Great's Wessex. However Alfred was able to defeat them at the Battle of Edington (878). The Danes retreated to their stronghold, where Alfred laid siege and eventually Guthrum surrendered. Under the terms of his surrender Guthrum was obliged to be baptised and leave Wessex. There followed the Treaty of Alfred and Guthrum that sets out the boundaries between Alfred and Guthrum's territories as well as agreements on peaceful trade, and the weregild value of its people. This treaty is seen as the basis of the foundation of Danelaw. Guthrum ruled East Anglia under his baptismal name of Æthelstan, until his death.

Viking raids began in England in the late 8th century. The first one was probably either in 787 or 789. [1] The Anglo-Saxon Chronicle for 787 says that:

"This year king Bertric took to wife Eadburga, king Offa's daughter; and in his days first came three ships of Northmen, out of Hæretha-land [Denmark]. And then the reve rode to the place, and would have driven them to the king's town, because he knew not who they were: and they there slew him. These were the first ships of Danishmen which sought the land of the English nation."

Raiding of the English kingdoms continued on and off until 865, when an enlarged army landed in East Anglia with the intention of invading and conquering.[2] This was reinforced in 871 by the Great Summer Army (Old English: mycel sumorlida).[3][4] 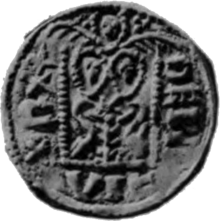 Guthrum, a nephew of Horik II of Denmark, and failed candidate for a share of the Danish throne, was one of the leaders of the Great Summer Army, that in April 871 joined forces with the "Great Danish army" based at Reading.The combined army had several military engagements with the West Saxons before wintering in London in 871/ 872. Coins minted in London during this period bear the name Halfdan, identifying him as its leader.[6][7]

In autumn of 872 the Army returned to Northumbria to quell a revolt[c]against its puppet-regent Ecgberht I of Northumbria.[9] The Army overwintered at Torksey, and was then reported as being in the Repton district a year later. It conquered Mercia in 874, the Burgred of Mercia being deposed and replaced by a Danish-puppet regent, Ceolwulf.[9]

Following this victory the Army split in two – one half under Halfdan heading north to fight against the Picts and Britons of Strathclyde. The other half under Guthrum headed south to continue fighting against Wessex.[6]

On Epiphany, 6 January 878, Guthrum made a surprise night-time attack on Alfred and his court at Chippenham. It being a feast day in Christian liturgical year, the Saxons were presumably taken by surprise—indeed it is possible that Wulfhere, Ealdorman of Wiltshire, allowed the attack through either negligence or intent, for, on Alfred's return to power later in 878, Wulfhere and his wife were stripped of their lands.[10][11]

Alfred fled the attack with a few retainers and took shelter in the marshes of Somerset, staying in the small village of Athelney. Then, according to the Anglo Saxon Chronicle, over the next few months he built up his force and waged a guerrilla war against Guthrum:

"Alfred: and he, with a small band, with difficulty retreated to the woods and to the fastnesses[d] of the moors.... at Easter king Alfred with a small band constructed a fortress at Athelney; and from this fortress, with that part of the men of Somerset which was nearest to it, from time to time they fought against the [viking] army."

After a few months, Alfred called his loyal men to Egbert's Stone, and from there they travelled to Edington to fight the invaders.[13]

In 878 Alfred defeated the Viking Great Army at the Battle of Edington. Guthrum retreated with the remnants of his army to their "stronghold", where Alfred besieged him for fourteen days.[14] Guthrum eventually gave in. The Anglo Saxon Chronicle records the terms of the surrender:

"Then the raiding army granted him [Alfred] hostages and great oaths that they would leave his kingdom and also promised him that their king [Guthrum] would receive baptism; and they fulfilled it. And three weeks later the king Guthrum came to him, one of thirty of the most honourable men who were in the raiding army, at Aller – and that is near Athelney – and the king received him at baptism; and his chrism loosing was at Wedmore."

Conversion to Christianity and peace

Under the terms of his surrender Guthrum was obliged to be baptised[e] and then with his army leave Wessex. The agreement whereby Guthrum surrendered, was baptised and agreed to leave Wessex is known as the Treaty of Wedmore.[15] After this another treaty followed that set out the boundaries between Alfred and Guthrum's territories as well as agreements on peaceful trade, and the weregild value of its people. This is known as the Treaty of Alfred and Guthrum.[16]

Guthrum returned to East Anglia, and although there are records of viking raiding parties in the 880s. Guthrum ceased to be a threat and ruled as a Christian king for more than ten years. He had coins minted that bore his baptismal name of Æthelstan. On his death in 890 the Annals of St Neots, a chronicle compiled at Bury St Edmunds in the 12th century, recorded that Guthrum was buried at Hadleigh,[f] Suffolk.[18][6][19] 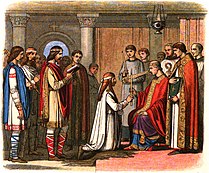 A Victorian representation of Guthrum's baptism in 878. 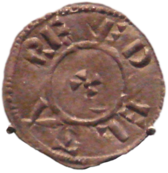 A coin minted by Guthrum in 880 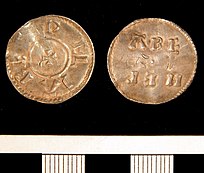 Silver penny of Guthrum, minted between 880 and 890.
After his baptism Guthrum ruled with his baptismal name of Æthelstan.

Guthrum appears in several works of fiction, including:

On screen, he was portrayed by Brian Blessed in episode 4 ("King Alfred") of Churchill's People, by Michael York in the 1969 film Alfred the Great, and Thomas W. Gabrielsson in the BBC and Netflix original television series The Last Kingdom.

He is the leader of a playable faction in the strategy game Total War Saga: Thrones of Britannia.

He is an ally of the Proto-Assassin Eivor in Assassin's Creed: Valhalla.

0.32 km
No Reviews
Favourite
Link to Town: Kyabram
For other people named Guthrum, see Guthrum (disambiguation). King of Kingdom of East Anglia, 879–890 King of East Anglia Guthrum[b] (Old English: Guðrum, died c. 890) was King of the East Angles. He was one of the leaders of the 'Great Summer Army' that arrived in Reading during April 871, to join forces with the Great Danish Army. The Danish Read more…
View all business in Kyabram
How to whitelist website on AdBlocker?