Fraser Anning's Conservative National Party is a nationalist political party in Australia[2][3] founded by Fraser Anning in April 2019, when he was a senator for Queensland. Anning had previously been a senator for One Nation and Katter's Australian Party, and sat as an independent before founding the new party. The party contested the 2019 federal election, but failed to win a seat.[4] 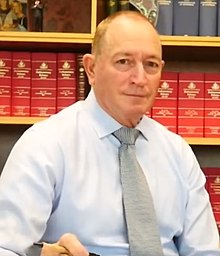 Defection from One Nation and Katter's Australian Party

Fraser Anning stood as the third candidate on the One Nation list for Queensland at the 2016 federal election, with Pauline Hanson and Malcolm Roberts standing as the first and second candidates respectively. After Malcolm Roberts was found ineligible during the 2017-2018 eligibility crisis due to his dual citizenship, Anning was declared by the Court of Disputed Returns elected, replacing Roberts.[6] After a conflict with the party's chief of staff James Ashby over his choice of staff, Anning resigned from the party and was sworn in to the senate as an independent.[7]

Anning joined Katter's Australian Party in June 2018.[8] During his maiden speech, in August 2018, Anning proposed a "final solution to the immigration problem" with a referendum and a "European Christian" immigration system.[9] Despite initially supporting Anning's speech, the party expelled him two months later with Bob Katter labelling Anning's views as racist.[10]

In January 2019, Anning applied to register Fraser Anning's Conservative National Party. The National Party and the Australian Conservatives objected to the name, arguing it was too similar to theirs and would cause confusion for voters. The Australian Electoral Commission responded that there was no real chance that electors would be left uncertain about which name attaches to which organisation due to inclusion of "Fraser Anning" in the name, which would additionally also result in distinct party abbreviations.[11][12]

The AEC approved the party's registration on 2 April 2019,[12] after the application for the formal abbreviation “Conservative Nationals” was withdrawn, in time for the party to contest the 2019 federal election.[3] Anning said he would be "announcing candidates across most lower house seats" and "running a Senate team in every state" for the election.

The party put up 70 candidates across both houses. These included several who have likened LGBTQI people to paedophiles, those who have been accused of animal cruelty, who have criticised single mothers and disability pensioners, and at least two who have criminal histories. One candidate, Scott Moerland, was a senior figure in the United Patriots Front and has links with Blair Cottrell and Neil Erikson, despite Anning's earlier claim that he would not endorse anyone associated with them. Their social media posts target immigrants from certain countries, Muslims, political correctness, LGBTQI people and ideas, and people and policies tackling climate change.[13] The party failed to win a seat; Anning himself did not get re-elected to the Senate.[14][15]

The Australian Federal Court handed down an order winding up the estate of William Fraser Anning on 16 March 2020, as part of Anning’s ongoing dispute with Adelaide and Bendigo Bank, which was chasing the debt of $185,000 related to Mr Anning's investment in a failed agribusiness scheme. [16] The date of his bankruptcy was ordered to be set to July 15, 2019. Sources close to Anning say he is currently visiting family in the United States and has not said when he will return to Australia.[17]

Anning himself has been described as far-right, a nationalist and a right-wing populist.[18][19][20][21][22] He attended a far-right rally in Melbourne for which he claimed almost $3000 in expenses from the government. At the rally he made claims about an "African gang problem" in Queensland, claims that were rejected by Queensland's police commissioner.[23] He also blamed Muslim immigration for terrorism,[24][25][26] calling for an "end [to] all immigration from Muslim and black African nations".[27] The party believes in the white genocide conspiracy theory. On its Facebook page, a post called for the preservation of "our ethno-cultural identity, or we will fast become a minority".[28] Its stated policies include:[26]

On 26 April 2019, during the 2019 Federal Election campaign, Anning used the site of the 2005 Cronulla race riots in Sydney to announce his party's candidates for New South Wales. A 19-year-old supporter of Anning was arrested and charged with assault and intimidation after being involved in an altercation with members of the media immediately after the announcement, allegedly punching a photographer and abusing a journalist. Video footage shows the young man repeatedly punching the photographer, who sustained injury.[29][30] The assailant was a member of the militant white supremacist group True Blue Crew, which has been linked to terrorism.[31]

On 12 May 2019, an official post on Anning's Facebook page included a picture of the family of Rahma el-Dennaoui, a toddler who disappeared in 2005, accompanied with the phrase "if you want a Muslim for a neighbour, just vote Labor" and the party's logo. The photo appeared to be from a 2010 Daily Telegraph article published shortly after the girl's disappearance.[32] The post was deleted the following day, but not before it had attracted a number of negative comments after Mariam Veiszadeh and others had commented about it on social media.[33]