Devanand Noel Sharma (born 21 December 1975) is a Canadian-born Australian politician, former businessman and former public servant. He held a number of senior positions in the Australian public service, including from 2010 to 2012 as the head of the International Division of the Department of the Prime Minister and Cabinet.[2] From June 2013 to June 2017 he served as ambassador to Israel.[3] His appointment, at the age of 37, made him the youngest person to be appointed as an Australian ambassador[4] and the second Australian ambassador of Indian heritage.[5]

Sharma is chairman of the board of directors of Shekel Brainweigh Ltd, an Israeli technology company.[6] In January 2018, Sharma also began working for Kelly+Partners Chartered Accountants, leading their Government Relations, Incentives & Innovation team.[7][8]

Sharma was born in Vancouver, British Columbia, Canada in 1975, to a Hindu Indian father and a Caucasian mother.[5][9] His family moved to Turramurra in Sydney, in 1979.[5] Sharma's mother died of breast cancer, and he was raised by his father.[10]

Sharma attended secondary school at Turramurra High School in Sydney. He matriculated in 1993 with the highest possible Tertiary Entrance Rank of 100.[11]

Sharma studied a Bachelor of Arts[3] at Cambridge University between 1994 and 1997. He initially studied natural sciences but transferred to law in 1995 (his second year) and graduated in law with first class honours.[4][12][13][14] He then returned to Sydney and studied medicine at Sydney Medical School.[12] Following a year of studying medicine, he began working as a public servant for the Department of Foreign Affairs and Trade and completed a Masters in International Relations through Deakin University.[4][5]

Sharma began working for the Department of Foreign Affairs and Trade in 1999[12] and held posts both in Australia and overseas. From 2004 to 2006 he served as the legal adviser to Foreign Affairs Minister Alexander Downer and was then appointed to the Australian Embassy in Washington from 2006 until 2009.[3][2]

Sharma held appointments at the Australian High Commission to Papua New Guinea in Port Moresby, and as a senior civilian adviser with the Peace Monitoring Group on Bougainville.[3]

Sharma served as the Assistant Secretary, responsible[15] for the Department of Foreign Affairs and Trade's Africa Branch between 2012 and 2013.[3] In November 2012, Sharma led a visit to Abuja, Nigeria and participated in talks with the Nigerian Ministry of Foreign Affairs and National Security Adviser as well as with officials from the Economic Community of West African States.[16]

Sharma was appointed the Ambassador to Israel by the Minister for Foreign Affairs, Bob Carr, on 16 May 2013[17][18] replacing .[19] Sharma presented his credentials to Israeli President Shimon Peres on 8 August 2013.[20]

His appointment as an ambassador at the age of 37 made him the youngest person to be appointed as an Australian ambassador.[4][11] He is the second Australian Ambassador of Indian heritage, the first being Peter Varghese.[4][5]

While in Israel, Sharma and his wife Rachel, visited casualties of the Syrian civil war in the Ziv Medical Center in Zefat. This visit made him the first international representative to visit casualties of the war.[21]

In January 2018, Sharma joined Kelly+Partners Chartered Accountants to lead the Government, Incentives & Innovation team in their Sydney CBD office to provide, amongst other services, specialist advice on government procurement processes for major projects, procurement and bids.[7][8] 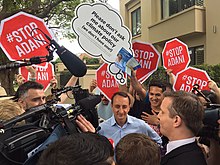 Following the August 2018 resignation of former prime minister Malcolm Turnbull,[25] Sharma was selected as the Liberal Party candidate for the resulting Wentworth by-election.[26] In response to criticism from John Hewson, Sharma has stated that the Liberal Party has a "good record" on climate change, and is "doing enough" to meet the Paris Agreement.[27] Independent candidate Kerryn Phelps won the by-election,[28] but Sharma was pre-selected again to run as the Liberal candidate for Wentworth at the 2019 Australian federal election,[29] and won the seat from Phelps.

Subsequently Sharma lost control of the domain name for his campaign web site by failing to renew it.[30]

In May 2014 Sharma caused a diplomatic incident by meeting with the Israeli Housing and Construction Minister, Uri Ariel, in Israeli government offices located in occupied East Jerusalem, resulting in a formal complaint from the chief Palestinian UN negotiator to Julie Bishop, the then Australian Minister for Foreign Affairs, that the meeting may be deemed as aiding and abetting … illegal Israeli policies[31].

After his preselection as the candidate for Wentworth, Sharma apologised for an opinion piece published the previous June in The Sydney Morning Herald where he argued that school infrastructure was underused and teachers worked only three-quarters the hours of a full-time job.[32]

On 26 September 2018, Sharma's campaign team was accused by other candidates in the by-election of removing their campaign posters and replacing them with Sharma's posters.[33]

Sharma is married to Rachel Lord, a lawyer and diplomat with the Department of Foreign Affairs and Trade. They have three daughters.[2]